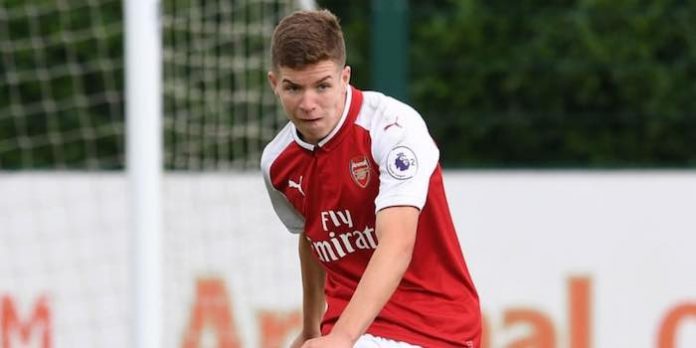 Arsenal included ten youngsters in their travelling squad for today’s game against Vorskla Poltava, and, while not all of them will get to feature during the Europa League clash, it will still be a hugely beneficial experience for them to travel with the senior squad.

Here’s a look at the ten youngsters selected.

Iliev is not likely to make the matchday squad but trained with the senior side before making the trip.

The regular goalkeeper for Arsenal at U23 level, Iliev is capable of making some fine stops but is also rather error prone. He has been called up by Macedonia at senior level.

Signed from Reading in 2015, Osei-Tutu is usually deployed at right-back but can play anywhere in defence.

The dependable defender has just returned from injury and will be looking to make his competitive debut for the first-team after catching the eye in pre-season.

Previously on Chelsea’s books, Medley is a tall centre-back who is composed in possession although he can get caught out at times.

Medley made the bench against Leicester in the Premier League earlier this season and possesses impressive leadership qualities.

The youngest player called up, Saka, who is usually deployed on the left wing, is extremely quick and delivers precise crosses with regularity.

An England youth international, Saka is also adept defensively and can play at left-back if required.

Despite not being a regular for the U23s, Thompson has clearly impressed Unai Emery during first-team training sessions.

Thompson hasn’t been especially convincing over the past couple of seasons but has good technique and captained the U18s last campaign.

A Scotland youth international who progressed through the ranks at Hale End, Gilmour (pictured) made the bench for the first-team in the Europa League last season.

Gilmour has shown some significant signs of improvement in the past year but can be over aggressive at times.

After his goalscoring exploits against Norwich City in the Carabao Cup last season, Nketiah has continued to be on the fringes of the first-team.

Having scored with regularity at U23 level, the striker will hope to be given a starting berth against Vorskla.

A player who needs no introduction, Smith Rowe has seized his opportunity in cup games so far this season.

The prospect will hope to excel against Vorskla and will also be looking to make his Premier League debut before the conclusion of the campaign.

Willock was regularly involved in cup games last season but has had to be patient for opportunities this campaign.

In the ensuing period, he has improved immensely at U23 level, often pushing forwards from midfield to support the attack to excellent effect.

With Arsenal not having many attacking options to call upon in Ukraine, John-Jules may get some playing time.

A hard-working striker, John-Jules is effective at linking up play and has impressed in the Checkatrade Trophy.

Thanks for the info jorge:)

Thanks Jeorge, hopefully 5 or 6 get some
chance tonight as I guess Cech, Jenks,
Licht, Rob, Elneny, Ramsey, Ash MN, and Mhki will all start but that leaves space
for 3 to start and some to come off the
bench. Hope they enjoy the game and get
a result too.

Love your insights Jeorg. These lads have our proud unbeaten run to protect tonight so let’s see who steps up and grabs the moment.

Thanks as always Jorge! Always hope the youth make the leap.

would be my team with Guendouzi kept fresh for Sp*rs and United.

Plus lots of the youngsters coming on once we are 3-0 up with Eddie’s first half hat-trick.

Did I not read something somewhere about Medley being ineligible for this game for some reason? He’s on the plane for a bit of experience/reward only.
Is that incorrect Jeorge?

It was initially thought that he would be ineligible but he actually signed earlier than it was reported so he can play.

I hope the all get a decent number of minutes

Where’s Julio? Is he injured?

He’s down by the schoolyard with Paul Simon.

Gilmour …can be over aggressive at times.

A good Scottish lad then!

Probably means we will revert to 4 at the back on the weekend.

Wonder if Lichsteiner can play at Cback with Holding. Could do with a bit of experience IMO.

Maybe AMN then can take right side fullback. Jenko left, surely good enough for this level of opposition.

Guendouzi and Elneny anchor the middle.

We have Ramsey, Mhkitaryan and Smith-Rowe in creative third and I suppose fast Eddie gets a great opportunity today.

If anyone bothers to follow our youth/U23 squad, its the attacking payers that are more accomplish. Defensively we are suspect. Just got trashed by 5 goals to Bolton.

A Different George
Reply to  santori

Wasn’t that match mostly 9 against 10? Which makes any result an anomaly.

It was Derby not the Trotters

Thanks for this Jeorge!

Thanks Jeorge. Regarding Gilmour, can you be too aggressive? Seems we need a bit of aggression in our side. Also, Medley and Saka look like keepers. Willock and Smith-Rowe are already first-teamers in my estimation.

Those lads did great last night in Kiev. We have great prospects in these kids. The future is bright for both club and kids. Bring on Spurs on Sunday.

The future is bright