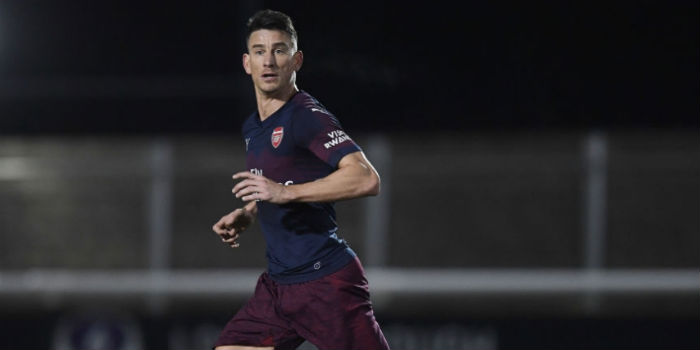 Last night, Laurent Koscielny stepped up his comeback from the ruptured Achilles he suffered in May with 45 minutes of competitive action for Arsenal’s under-23s against Derby County.

It was a tough night for Freddie Ljungberg’s young Gunners who conceded four times after the Frenchman was substituted at half time and had two men sent off. It ended 5-0 to the home side.

On the plus side, Freddie was pleased with Laurent’s comeback and the fact he came through unscathed.

“He looked okay afterwards so that’s a great positive for the club,” he told Arsenal.com afterwards.

“The [young] players will learn a lot from him and you can see that we dominated possession and we held the ball quite well in the first half, so it’s just unfortunate that we gave away the penalty.

“I thought he did really well and I’m happy that he feels okay.”

Koscielny will likely get some more game time with the under-23s before putting himself forward for first team selection in the coming weeks. Given the number of matches on the horizon, his recovery is timely.

As for the under-23s, they’ve got some work to do if they’re to close the seven point gap on Derby who went top of Premier League 2 with last night’s victory. In fairness, it probably doesn’t help that Unai Emery keeps pinching Freddie’s best players for the first team.

Despite a hammering, the Swede put a positive spin on things.

“In the end we just had to sit in two blocks of four and try to stop the scoreline from getting too far out of hand,” he reflected.

“The players had to work on that and not allowing too many split passes, and we said in the dressing room that there was a game before the sending off and a game after the second half.

“We’re mostly going to look at the game before the sending off and it was okay. We thought at half-time that with some changes we could change the game, but unfortunately we never had that opportunity.”

Get back in the first team Kos!

Still way too early for use midweek but a great option to have returning. Although I suspect his use from here on will be sporadic unless we have a crisis in numbers at the back. I expect we will either rotate through Mustafi, Holding and Sokratis in a back 4 or if we should go 3 at the back, then the added option of Koscielny from the bench will be very useful. Mavropanos to me still has a lot to prove. Likely in secondary games, may get some feature but next summer, we will have to re-assess some other hopefuls… Read more »

With regard Kolasinac…I don’t know how he can come across as lazy. I think he is just returned from a long lay off and clearly needs a bit of confidence. His defensive game needs a bit of work but in part he is also hampered by the fact that in a back 4, he has Aubameyang in front of him and less defensive support as a result. The same issue plagued Bellerin on his flank with Mhkitaryan at start of season although against Bournemouth, whilst the Armenian was less than his best, he covered a lot more ground..second highest in… Read more »

Nothing is inked in stone. So true.

Lithographs are inked in stone.

I stand corrected. Oh boy do I feel stupid.

According to Sky Sports our game on Thursday has been moved to Kiev.

What about the fans who’ve booked the trip to the other place?