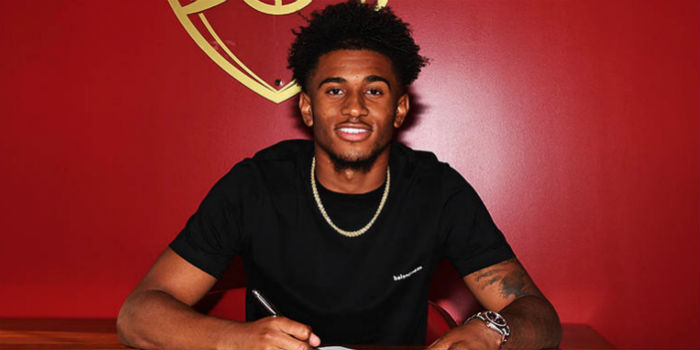 Reiss Nelson says he was lacking confidence when he made his first appearances for the Arsenal first team last season, but he’s hoping his loan spell in Germany will rectify that.

The England under-21 international has taken the Bundesliga by storm since joining Hoffenheim on loan in August, scoring six goals and grabbing an assist in 11 appearances.

Having committed his long-term future to the Gunners before joining up with Julian Nagelsmann, the youngster says he has his sights set on achieving legendary status when he returns to the Emirates.

“Arsenal are my boyhood club,” he told the BBC. “I’ve been with them since I was eight, so that’s 10 years.

“I just want to go back there stronger because at the time I was at Arsenal I was 16, 17 and I didn’t feel confident.

“I didn’t think I was a man, but now I’m feeling stronger and I think a couple more months or even a year in Hoffenheim will make me strong and give me the belief and confidence to go back to Arsenal and do very good there.

“I want to be an Arsenal legend. And, for England, it’s the best. You can’t beat playing for your country I don’t think.”

Nelson made 16 appearances for Arsene Wenger’s side last campaign, but, unlike fellow Academy graduate Eddie Nketiah who grabbed a brace on his debut, he struggled to make a game-changing impact.

That came in stark contrast to his influence at under-23 level where he led the Gunners to Premier League 2 glory and was named the division’s best player.

Given the boost Nelson has enjoyed to his confidence and profile in recent months, he’s understandably supportive of other aspiring players joining him on the continent.

“I know a lot of the top [young] players in England as well and they’re always saying, ‘How is life in Germany, how is the Bundesliga?’ and I’m just saying, ‘It’s great’.

“They believe in young players and that’s the main thing. Getting the belief behind you to play football.

“It might no be so good for England if they [young players] all leave, but on a personal level, I think it will be great for young players to get playing time and show everyone what they can do.”

You can watch and read the BBC’s full interview with Nelson and his close pal Jadon Sancho, who is at Borussia Dortmund, here.

And we want you to become the legend that you aspire to be at Arsenal!

Or maybe they just have fat fingers

Well that’s great! Just have your agent take advantage of our own ineptitude and fleece us.for as much as possible, then show up one in every five games!

You really hate Ozil don’t you.. hate destroys your soul

yeah its only a joke. Dont hate him 😀

Love those strong words and the confidence! Hope he stays there until the end of the year and develops even further.

It’s weird theyve played him at RB mostly (where he understandably looked uncomfortable) and last game he was deployed as a DM. It says something that he can’t get a game as a CB in probably the worst defensive team in the league. It’s positive that we loaned him, I’d like to see him overcome his difficulties and establish himself in a position – whatever it may be. It’s good that his mistakes won’t be costing us points and I’m sure the manager will be getting a lot of info about him so that if it’s not going to work… Read more »

I think it actually highlights his ability to be versatile, that he wants to help and play as much even if it’s not his best position. In contrast you can also say that his teammates are so bad that they can only play one position and can’t even do that properly. Or that he has to be on the team even if it means it’s not his best position. Regardless the gaffer was clueless and I hope Ranieri can scrap the best of the rest of his loan move.

Fulham apparently approached Wenger first, Wenger said no, so they turned to Ranieri. I suspect Wenger is holding out for a job in Asia.

No he’s actually got it on Brexit secretary

Number 8 will be free at the end of the season. Next Ian Wright? Seems a much more natural winger, but so did Henry at his age.

I’d prefer him to take the no.7 shirt and make it his own. Our new Bobby, and also to replace that Chilean dude who was last seen sulking at United.

Also as amazing as his goal scoring feats have been, let’s remember he’s not actually starting regularly. That indicates he still has things to learn. Let’s just leave him be and let him learn and develop.

Hardly starting at all.

he’s really got an eye for goal

They should be a dedicated column to Nelson.

I like how he said “a couple months or even a year in Hoffenheim…” Has the idea of bringing him back In January been more seriously floated after Welbz’s injury?

Thomas b
Reply to  Xhaka Demus, no Pliers

I really hope he will stay there until next season. The way he is developing now is great, and I wouldn’t like to gamble on bringing him back to early. Can only see him grow even better by continuing his progress in Germany for the time being.

I will help you achieve that goal with my prayers and support. COYG

These things are better left unsaid.

I remember Walcott saying something similar when he demanded playung as a forward.
That turned out well.

At least this lad is actually a good footballer

I think Walcott is a good squad player to have especially considering our lack of wingers at the moment. I think he would have been an ideal player to bring on against Wolves but what do I know?

Bringing on a winger whose primary weapon is latching onto through balls behind the last line’s backs?
Against a team that spent the majority of the game defending 20 yards from goal?
Might have been ideal for Wolves as I can name countless games where he came off the bench in these types of situations and was just frozen because there was no space to run into.

A Different George
Reply to  Zilhad

When Walcott was at his best in recent years, he was quite effective even against a deep block. His diagonal runs into the penalty area dragged a defender with him and Alexis (most notably) was able to capitalize on the space that created.

Where did you get this from?
He really wasn’t. It was against better teams who attacked us and gave us space is where he was most effective.

Also what does Theo provide that Auba doesn’t?

Not claiming Theo was better than (or as good as) Aubameyang, just that Theo could be effective against defensive-minded teams, just as Auba can. Where I got that was from watching.

Trying not to indulge in the hype. Lets let him develop until next season. Hopefully he doesnt get a call-up from Gareth any time soon, would ruin him i feel

I fear Bayern Munich coming in with some offer he can’t refuse. Even though they are going so well, Gnabry is a starter now for them.

Good old south London boy!! Can we get him back in January now Welbeck is out ?