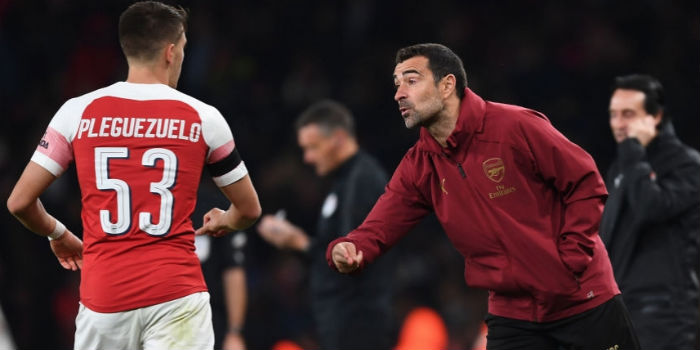 Julio Pleguezuelo says he’s delighted to have made his Arsenal first team debut having waited five years for his opportunity since signing from Barcelona.

In the midst of a defensive injury crisis, Unai Emery thrust the 21-year-old centre-back into action against Blackpool in the Carabao Cup and he went on to impress alongside Shkrodran Mustafi.

The defender, who has enjoyed two loan spells with Mallorca and Gimnastic in his native Spain, had started the week expecting to play for the under-21s in their Checkatrade Trophy showdown with Cheltenham Town on Tuesday evening making his call-up all the more exciting.

“I was meant to be playing yesterday for the under-21s in the Checkatrade Trophy, but I got a phone call that the first team needed me for training and I literally found out in training that I was starting,” he told Arsenal.com.

“Everything happened so quickly and I’m so happy. I tried to stay very calm and I knew it was going to be a very important game for me. I tried to take a lot of pressure off before the game and the performance couldn’t have been any better from myself and the team.

“I couldn’t be any happier and I think I’ve been waiting a long time for this. There’s a lot of hard work behind this and to be fair thank you very much to the boss for giving me the chance.

“I think after six years at the club I had some experience of going out on loan and I knew this was going to be a very important year for me and I kept working and I think I got the reward for that.”

Congratulations to Julio, who’ll no doubt have his eye on further opportunities in the months to come.

Pleguezuelo’s departure a shame but a necessity

Always like a win on a debut, best wishes to him.

I think we are seeing the changing of the guard.

Old Brit core and Academy graduates moved or moving on.

Its in with the new – Bellerin, Iwobi already somewhat established but we have AMN, Smith-Rowe, potentially Nelson and Nketiah now possibly a role for Pleggy too.

I’m not sure if he will entirely be suited for Cback bc of height (just shy of 6 feet) but certainly great potential and lets remember he started at Rback where we have a vacancy coming up shortly.

Certainly did not disgrace himself against Blackpool by any means.

He’s a rightback by training. Maybe in contention to challenge/back up Bellerin with Lichsteiner likely to move on. On the other flank, hope either of Monreal (preferably) or Kolasinac will pass fit for Sat. BUT we seem to forget AMN has been re-introduced which is a massive plus. Again unsettled in role, he can cover Lback should we not find a replacement for Monreal in summer. What I like about AMN is his recovery speed. May make some mistakes here and there as natural for a young player but he can recover from them. He also has excellent tekkers something… Read more »

I thought he looked very good. He should be proud…

I like him, he is still young for a center back and has time to mature. I really like what is going on in the defensive department (their performance needs to improve yes). I see aging defenders and the fact that we bought sokrakis as an experienced CB while we bread in the new generation.

Important to go to bread.

He obviously meant “blend”, so focus on the intended message.

Iighten up man…it was just banter, which is good for the soul?

I agree, we should bread them in to replace some of the current crusty old centre-backs.
Just hope they rise to the occasion.

But if they start asking for too much dough, the situation could turn sour.

Likely because of poor sense of humor.

I hope that if there is a future knead that Pleggy can baguette another chance. Just so long as his opposing centre forward doesn’t have him on toast, he’ll be ok.

A bit on the small side but he played a very neat, calm and composed game, I thought he looked very promising.

Yeah the commentator for the game said he was 6’3″, it took me about 3 seconds to realize he was not.

He enjoyed two spells with Mallorca and Gimnastic lol was the gymnastic flexible enough?

Wow…. To have to wait patiently for 6 years and sound so grateful is humbling, and a testament to how massive this football club is. nice head on his shoulder, I hope he gets many more opportunities.

Is it my ears playing tricks on me, or has he been taking English lessons from Hector? Sounds very Cockney Spanish to me- and I mean it in a very positive fashion! (Why did I write ‘fashion’ – sorry ‘Ector, I’ll find my coat..)