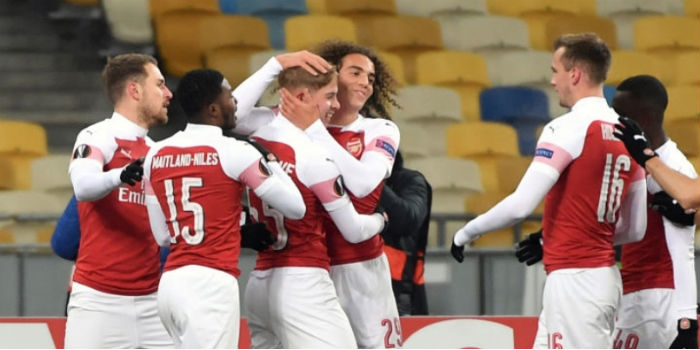 The Gunners goals all came before the break as Emile Smith Rowe, Aaron Ramsey and Joe Willock added a nice gloss to a slick display.

The win also extends our unbeaten run to 18 games ahead of Sunday’s derby with Sp*rs.

In temperatures of -12C and against the backdrop of 80,000 empty yellow seats and the Olympic Stadium’s bright blue athletics track, there was a slightly surreal feel to proceedings as Unai Emery’s fathers and sons XI got things going.

Carl Jenkinson started alongside Rob Holding in the centre of defence, Elneny and Guendouzi anchored the midfield, while youngster Willock, Smith Rowe and Ramsey were charged with causing havoc up front with a helping hand from Aaron Ramsey.

It didn’t take long for us to find our stride. After a couple of early efforts by Vorskla’s Volodymyr Chesnakov, one of which forced Cech into a save, we started to dominate possession. Then the goals started to flow.

On 11 minutes Aaron Ramsey showed quick feet to evade a marker in the final third before playing in Nketiah whose shot was closed down at close range. As the ball spilled free, Smith Rowe was on hand to pass the ball into an empty net for his third goal of the season. (1-0)

Having played a big role in the opener, Aaron Ramsey doubled the lead on 26 minutes from the spot. The referee had no hesitation pointing for a penalty when the Welshman was bundled over running away from goal and after dusting himself down he slotted his effort to the right of a static keeper. Vorskla’s players complained that he’d stopped his run-up. He hadn’t. The goal stood. (2-0)

Youngsters Willock and Nketiah both tried their luck either side of the half hour mark, before the former channelled his inner-Thierry Henry to score his first goal for the first team. Given the ball by Elneny about 40-yards from goal, the 19-year-old bound towards the box and when faced with a few men in front of him, simply opened up his body and curled the ball past the keeper. It was a lovely finish. (3-0)

The home side’s efforts in the first half were summed up by a wayward effort by Vladyslav Kulach who, having stolen the ball off Elneny, proceeded to shoot so far wide, he nearly scored in Poltava.

Having watched Willock and Smith Rowe get on the scoresheet, Nketiah was full of beans at the start of the second half as he went in search of a goal of his own. Moments after his trickery had created a chance for Ramsey, the young striker found himself alone in the box with just the keeper to beat but he lacked his finish lacked composure. It was almost like he was trying too hard.

Centre-back Zech Medley came on for his debut in place of the booked Rob Holding and demonstrated his potential with a few nice touches. He was joined by 17-year-old Bukayo Saka who replaced Aaron Ramsey.

Between the substitutions, it looked as though Smith Rowe had bagged a fourth goal when he darted in at the back post to tap home a Lichtsteiner cross that had evaded the entire Vorskla defence. The England youth international’s look of bemusement after scoring seemed to spur the referee to disallow the goal. Did Nketiah accidentally clip the heel of one of the defenders? Maybe.

At the other end, Cech made a very decent save before his opposite number stopped Smith Rowe from finding the top corner with a rasping drive. Vorskla’s man between the sticks also denied Saka whose stepover made space for a shot.

Emery handed a third debut of the evening to Charlie Gilmour who came on for Guendouzi. The Frenchman didn’t put a foot wrong all evening. It’s so easy to forget that, like the lad who replaced him, he’s only 19-years-old.

We really should have added to our tally for the evening. An Nketiah cross rebounded out off Willock and the same man couldn’t find enough loft as he went one-on-one with the keeper. Deep into stoppage time, Nketiah curled yet another effort just wide. Not to matter.

On the touchline, Unai Emery was full of encouragement for his boys. When he watches the game back on his iPad on the way home, he’ll no doubt be rightfully proud. At the end of a tricky trip it was a fine performance. Well done to everyone involved, including those dedicated supporters who had to switch their travel plans.

Enjoy a safe journey home all.

UEFA confirm Arsenal’s match with Vorskla will go ahead

Wasn’t expecting such an easy match. Great for the youngsters, some goals, some debuts and another chance to play in the final match. Good result all round.

Too Drunk To Be Offside
Reply to  Pedant

These kids know how to play.

Very well played even if all those young players were out well past their bedtime.

They all got ice cream vouchers for after as well

Hope they’ll play in a full stadium in the last game at the Emirates. They deserve a proper game with proper atmosphere.

Willock is so smooth and funky in what he does that I’m beginning to suspect that he’s the reincarnation of Preston Crump.

Which is the only thing that worries me a bit with regards to AMN. The sky is the limit for him.
I hope he makes the most of his potential.
Emery should be the right coach for that.

OMG Maitland-Niles face expression(s) is priceless! Only got the “Why?!” and the “OK, cool”. Coolest kid on the planet! Real birdcatcher tho!

Even against our youngsters, Vorskla looked ripe for a spanking. You can’t help but feel that we should be keeping better company in European competitions. Let’s hope that we manage to secure a Champions League position for next season!

True, but you know the old one about beating what’s in front of you, etc. Let’s not discredit what the kids (and odd golden oldie) did.

I’m definitely not – they did a great job today. I’m just hoping that we can be tested against (no offense to Vorskla) bigger, better opposition. That’s when we’ll really know how good we are.

In this moment, I’m pleased to see a team of greenhorns, squad fillers and a few seasoned pros shepherd their way through an away tie in Ukraine with the minimum of fuss. We’ve made a toddler’s mess of such ties in recent seasons, but there was nay danger of that this eve. I take your point though, next year’s trip to Ukraine – if there is one – should be to face Shakhtar, presuming there’s still a Shakhtar there by then.

That’s what the game after next is for.

Very, impressed by the youngsters today.

Special mention for Ramsey who was professional showed his quality without sulking.

What a talented bunch! A joy to watch.

Also, Emery’s touch is starting to really show. The team is much, much better off the ball now than under Wenger.

But please let’s point out that it was a touch. most of these players made their debut under Wenger and Arsene (even if i don’t like these kind of comparisons) really made a differnece to SAF, who left united in scrambles while AW22 was about to build up the next invincibles.

So many academy and British players today. Hope some if not most, make it to the senior squad on a regular basis for us.

I appreciate the professionalism the youngsters brought tonight, and on such a cold night. It’s not easy playing when you can’t feel your toes. These players did really well, and should be well proud of their performance regardless of the competition.

A couple of thoughts on a couple of chaps. Elneny was impressive. His willingness to take responsibility for the younglings – encouragement, communication, organisation – was exemplary. Yes, I know he only gets the minutes in the fringe cup matches these days, but still – he was like Old Uncle Mo out there. In a good way. Speaking of which, Jenko slotted in at centre back without a hitch. His preparation must have been listening to an audiobook on positioning, narrated by David O’Leary, whilst watching some footage of George Graham roping the back four together. Didn’t put a foot… Read more »

Thanks for your kind words, people.

Guendouzi will be big, really fu**ing big! Willock was impressive, especially given the fact that he was playing as a winger. Has he always been that fast? And that strong and big? Nketiah worked hard and would have deserved a goal, too. Smith-Rowe really good again as well. Pretty mature performance with that many young players on the pitch. Bring on them homeless goblins! #COYG

A Fleeting Glimpse
Reply to  Berlingoon

Glad it ain’t up to you

Goonshow
Reply to  A Fleeting Glimpse

you complete and utter muppet

arsepedant
Reply to  A Fleeting Glimpse

oh boy….u can call me cpt caution because i don’t get overboard to easiliy but i think emile smith-rowe is the next messi with a mixture of ronaldinho and zidane plus 7 and eddie(sorry for jinxing ya two goals) is somewhat of an ian wright-berkampesque ronaldo9 style of player who will break all world records. and willock looked like he swallowed kolasinac. great work in the gym buddy!

I always appreciate blind optimism, but how much have you had to drink tonight? Be honest!

Movement without the ball now so brilliant, opens up options for passes. The passes are also crisp and purposeful/direct in most cases. We had them where we wanted them all day. Was impressed with the whole team. Nketiah looked very decent and it was nice to finally see Saka play, he was strong and very direct. Good day at the office

Nice easy evening. Let’s be honest: Vorklsov, or whatever they’re called were crap. Rochdale’s reserves would have given us a tougher game. But you can only beat what’s in front of you. The good thing about tonight was we saw some very good young players emerging. This reminds me of the mid-Eighties when Adams, Thomas, Merson, Rocastle and co all suddenly emerged. This lot could do some real damage in the coming years.

Who are you, and what have you done with Fatgooner?
Just kidding; I love the optimism. I didn’t get to see this one, but if you liked it, it must have been nice.

Guendouzi already looks like an established star..You can see the difference between him and the others his age.

Boy, the future loooks definitely bright at Arsenal from whati saw tonite…mightily impressive. Yes, the quality of the opposition is not the best in europe, but you can only play whats in front of you and dont lets forget we have cocked up similar matches in the past, with a team of adults. The quality of these kids off and on the ball was a joy to watch, and it is this gulf in class displayed that demoralised the opposition. I really can dream of a future Arsenal team composed of lots of academy graduates, and its not the beer… Read more »

If I may , Yaya Willock ! Obviously minus the cake shenanigans.

Ominous that Spuds just stopped Chelsea’s run of 18 games unbeaten and now we face them with the same number.

I fucking hate them, please let us win.

On a happier note I thought our youngsters were great tonight and I’m really optimistic about the future. Can’t wait to see some of these lads gracing our first team in the years to come.

Big thanks to our former manager for ensuring we have a tonne of home grown talent coming through who play The Arsenal way. It’s a beautiful sight.

A smashing performance from the fathers and sons. Kudos