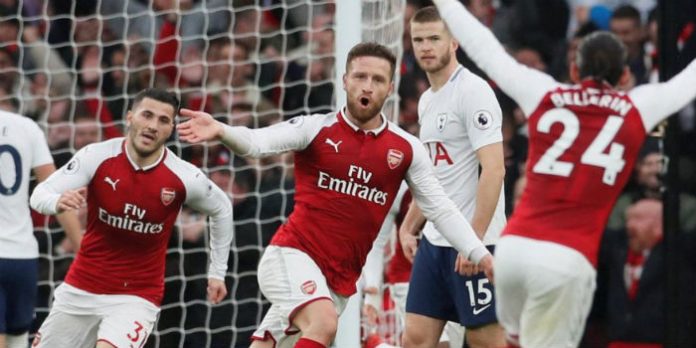 Arsenal have confirmed that the Carabao Cup quarter-final with Sp*rs will take place at 7.45pm on Wednesday, 19 December and that our neighbours have been given a slightly reduced ticket allowance.

Carabao Cup rules state that Sp*rs should be eligible for 10% of the tickets on sale, however, after consultation with the Metropolitan Police, the visitors will only get an 8.68% allocation, amounting to 5,233 tickets in total. Tickets to Arsenal supporters will go on sale from Monday, November 12, 2018.

The club have also confirmed that non-corporate tickets will be no more than £20, despite alleged protestations from Daniel Levy about our policy of reduced prices for the competition.

The match will be the second North London derby in December; Mauricio Pochettino’s homeless goblins also visit us on 2 December in the Premier League.

One does not simply walk into Wembley..

Or a new stadium

We get 2 chances to humiliate them. Happy days.

Maybe more if they finish third in their Champions League group and drop into the Europa League…..

I would understand more if you know, their fans had seats to sit in.

Maybe he is hoping to charge 10k a seat at their new place. You can buy a tonne of fold up chairs at IKEA for that.

I presume gate receipts are split and he’s a money grabbing twat?

Agree, I believe gate receipts are split 50/50 in the domestic cup competitions.

Daniel Levy is a cunt, allegedly.

I think they have to charge their fans the same amount I.e 20 quid…I guess Levy was hoping to squeeze the Spuds for a few quid more to help pay for the inevitable trashing of the toilet facilities at the Emirates…the Arsenal Gent memorably called them ‘the enemies of indoor plumbing’

Quite ironic that they trash the Emirates toilet facilities when they are desperate for their new stadium to be better than the Emirates, yet its design is distinctively bog shaped.

Not sure if it’s changed, but League Cup gate split used to be 45% to each club after basic operating costs. Given a game against them is usually a category A fixture, the total gate will be less than a quarter of of the normal total a NLD would bring in via ticket sales, yet with the same operating costs. Sp*rs basically would be getting a heck of a lost less cash.

I remember that being a big reason for small teams requesting ties at the larger venues so I guess that’s still a thing.

But not on every computer it would seem. Weird..

Does it actually register the vote on other machines, I. E you up vote 10x but might only shows +1 on another device?

Why are they allowed any allocation at all? They shouldn’t be able to come and sit in our finestadium til they have one of their own. unless its some kind of act of charitable pity, the thought of 5000 “homeless goblins” taking residence in our fine stadium singing that really slow version of “when the saints go marching in” dressed entirely in greyest garb they can find appals me.