21 unbeaten overall and 14 unbeaten in the league. It has been an excellent run of form for Arsenal lately.

This match against Huddersfield wasn’t pretty but Arsenal collected the three points which isn’t an easy task after a trying week with a North London Derby and a trip to Old Trafford.

With seven matches coming up over the next three weeks there may be more of these type of matches in the future. 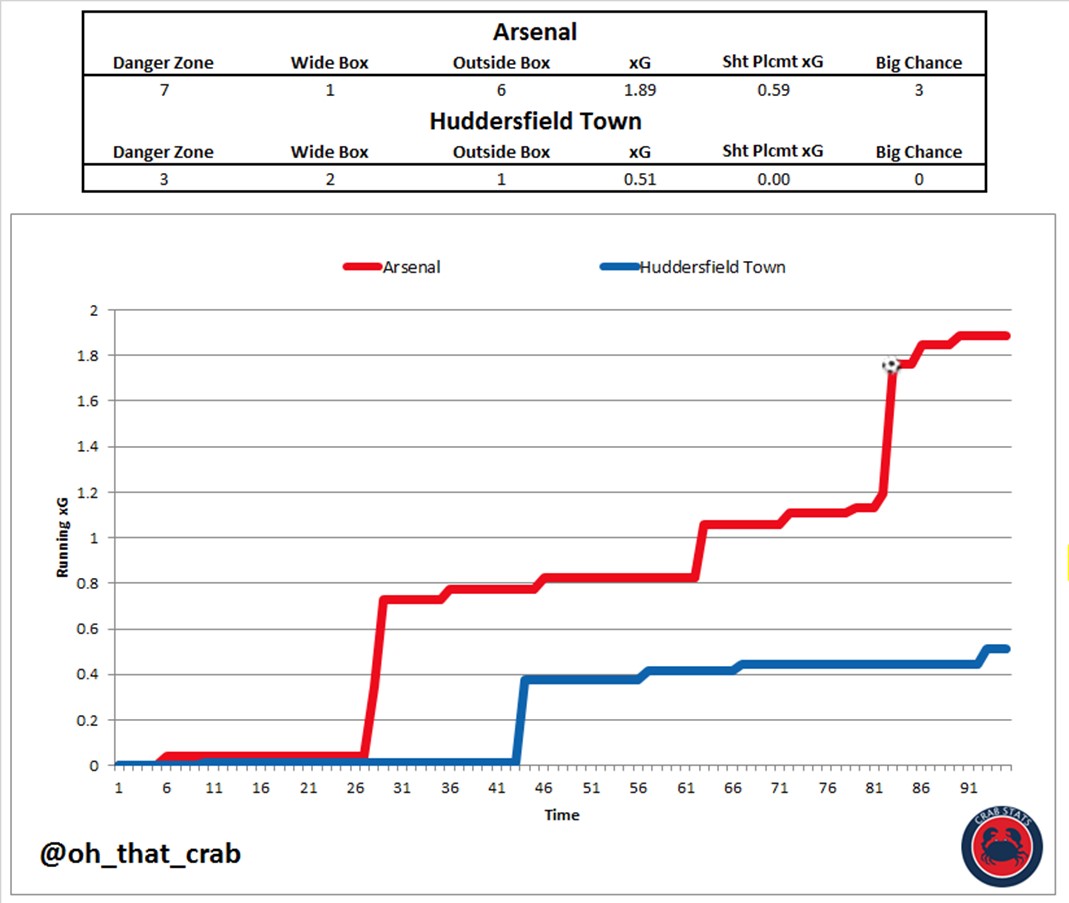 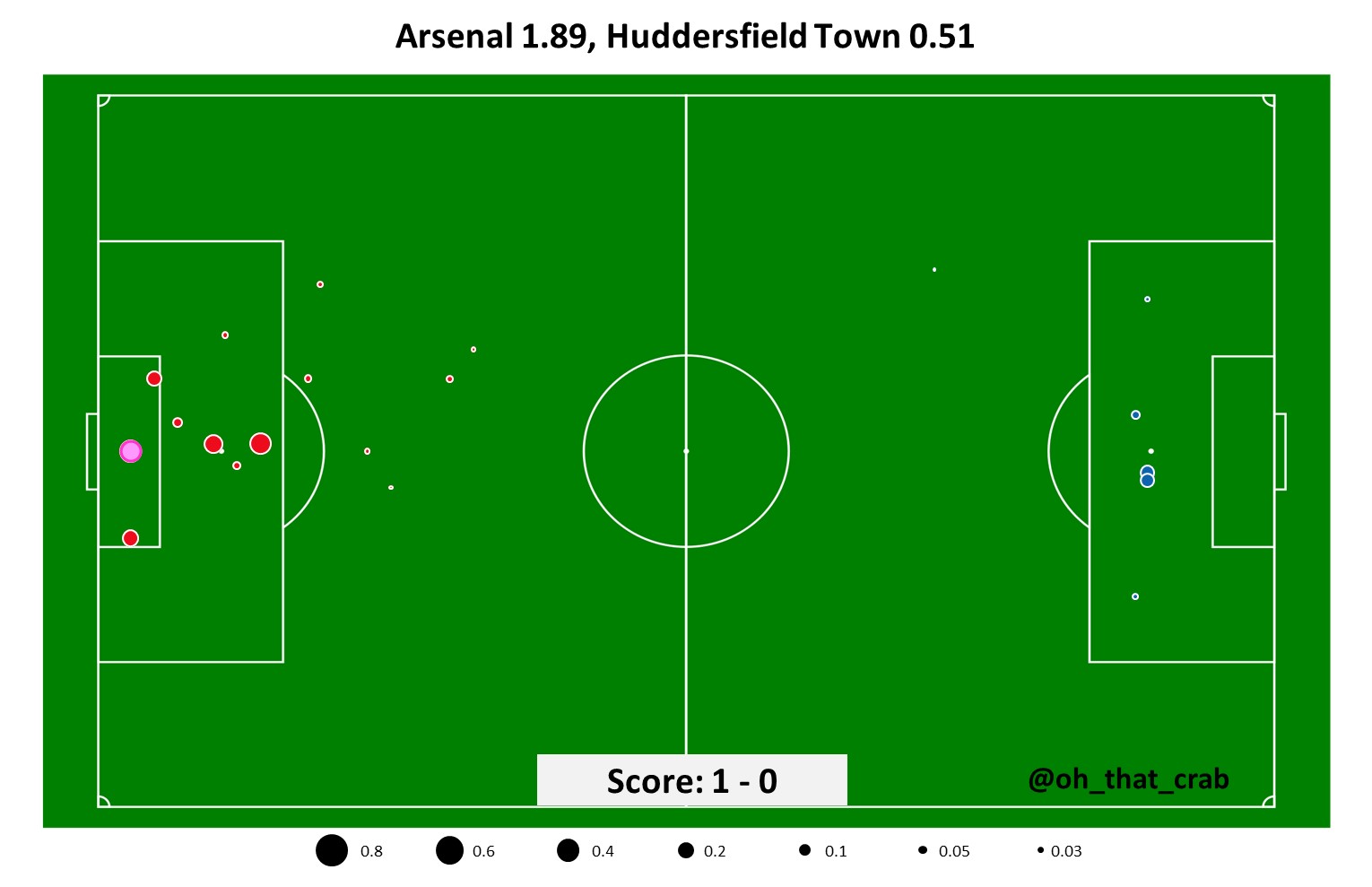 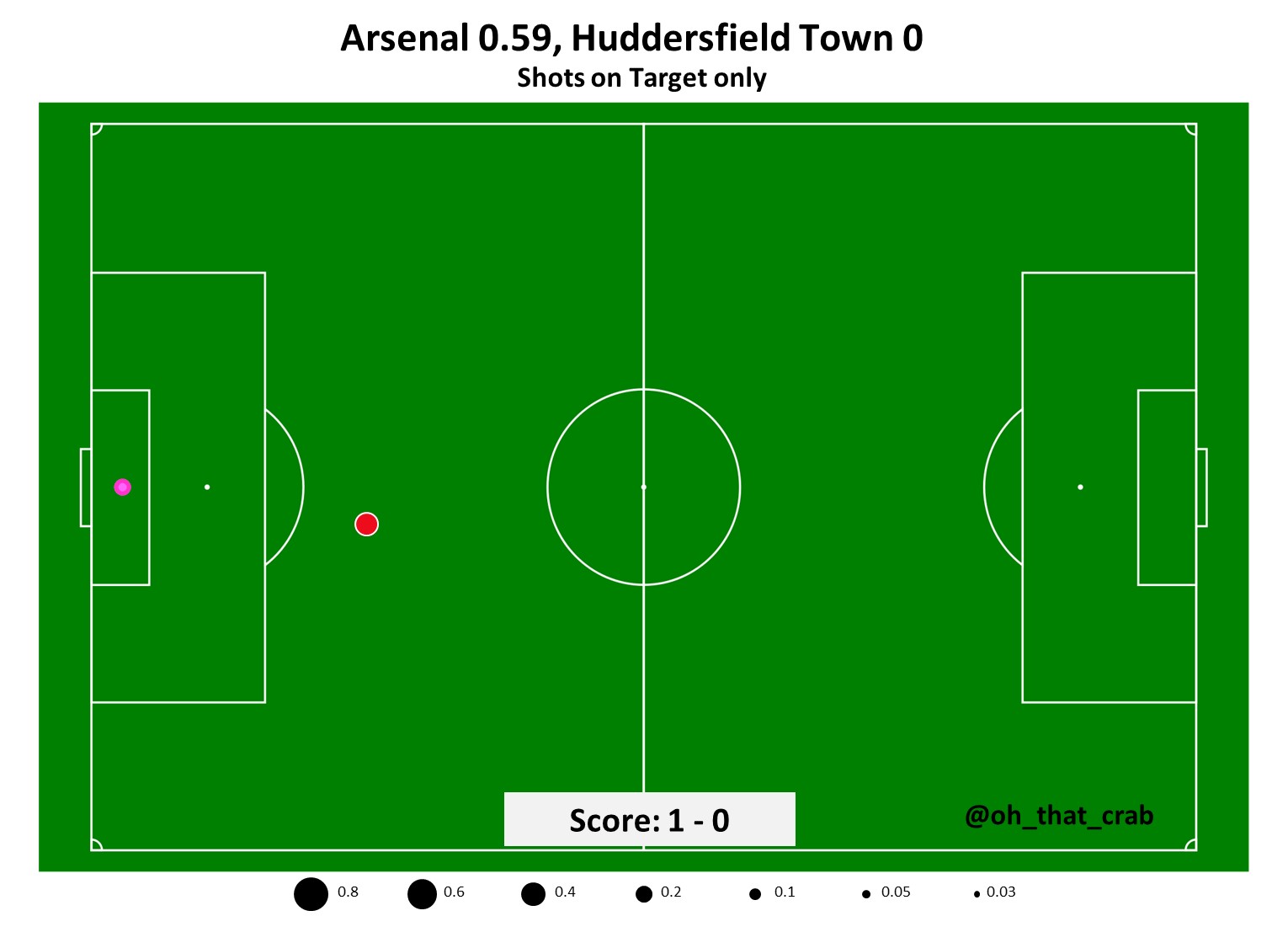 Simulated Match Result based on shots 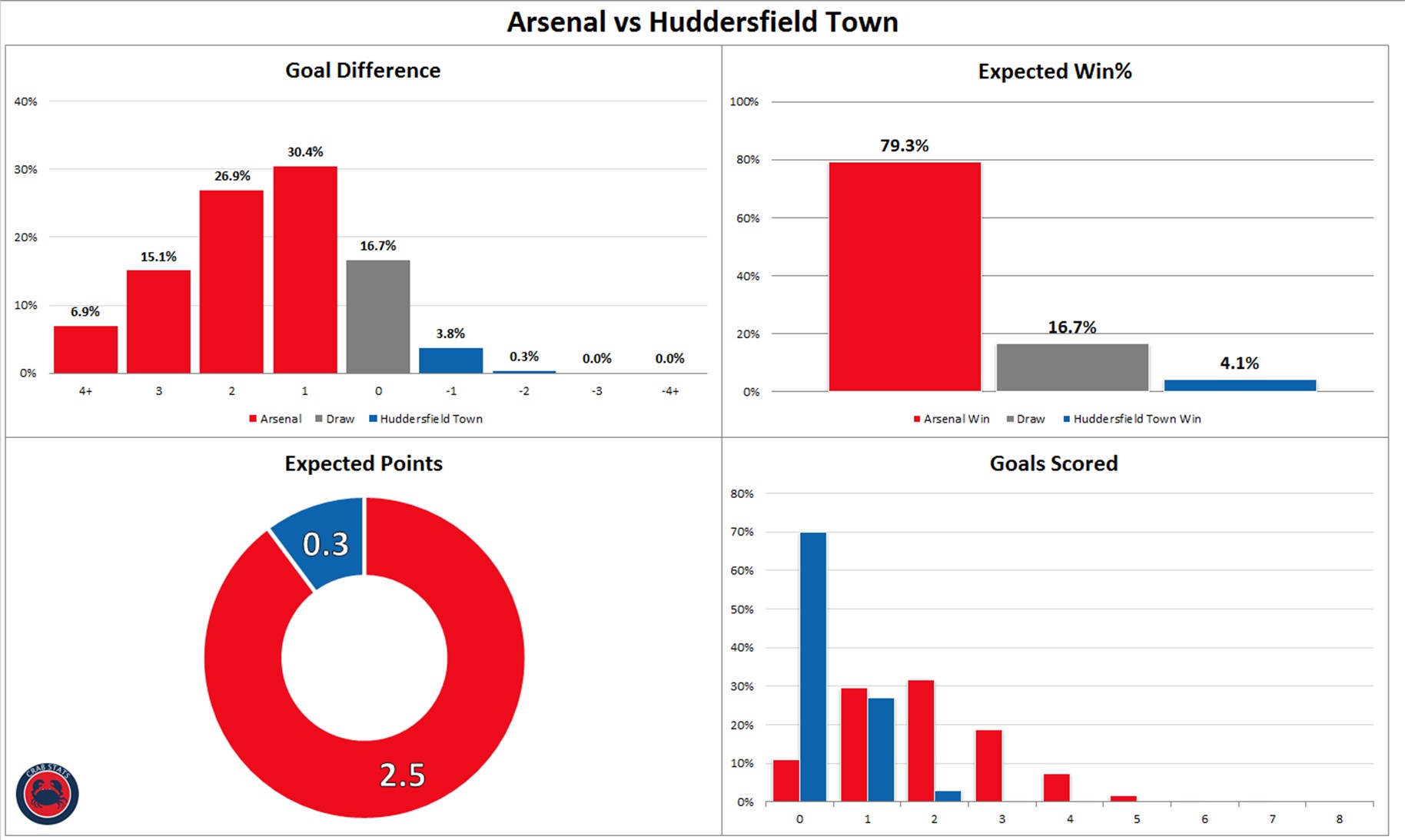 44.7 – Defensive actions per match for Huddersfield coming into this match, second highest in the league

9.9 – Passes Allowed per Defensive Action, fifth fewest in the Premier League. (PPDA is a measure of pressing)

Unlike most lower table clubs, Huddersfield play an aggressive pressing style of defense. They commit a ton of defensive actions and attack teams up the field. This is something that is pretty unusual and made for a difficult match.

It also made for a tough one to watch as Huddersfield kicked Arsenal all over the pitch and took advantage of a referee who had trouble maintaining control.

3.2 – Fouls suffered per 90 minutes, third most in the Premier League (min 10 appearances)

2.4 – Tackles per 90 minutes, thirty eighth most in the Premier League and fifteenth most among central midfielders (min 10 appearances)

9.1 – Ball recoveries per 90 minutes, second most in the Premier League (min 10 appearances)

66.9 – Passes per 90 minutes, twenty first most in the Premier League and seventh most among central midfielders (min 10 appearances)

89.4% – Pass completion percentage, fourteenth most among in the Premier League and  ninth most among central midfielders (min 10 appearances)

There isn’t much to add, Torreira has been an amazing player for Arsenal and if he adds goals to his already stellar play that would just be icing on the cake. Every match I see him play makes me even more impressed with him and happy that he is wearing the Red and White of Arsenal.

Granit Xhaka was really missed Wednesday against Manchester United and made his influence felt in this match. In a midfield that was light on creative talent, Xhaka was tasked with carrying a bigger load in this match. He responded by creating two chances, both ended up being big chances and ones that often would turn into goals on other days. With the partnership next to Torreira he has looked much better defensively and that was no different here as he led all players in tackles and clearances.

There is still some trouble in his game that are frustrating, especially with his passing. He is a very good passer but he all too often will make a handful of really bad passes that a player of his caliber should not make. This can be seen in his passing value added numbers for the match. He led all players in positive value but also had the highest negative value, ending up with the second best overall numbers.

2 – Big chances for Aubameyang against Huddersfield

0% – Big Chance’s for Aubameyang on target against Huddersfield

50% – Big Chance’s for Aubameyang on target this season

69% – League Average % of big chances put on target this season

0% – Conversion rate for Aubameyang for big chances against Huddersfield

42% – Conversion rate for Aubameyang for big chances this season

Aubameyang had the two best chances for Arsenal in this match but was unable to convert either of them. That is unusual for him this season as he has been very clinical about converting his chances. Even after these misses he has produced goals at an impressive rate given the shots that he has had.

This was brought up on the Arsecast Extra and here is the answer to Andrew and James question, he is currently at 7.2 xG this season and he has 9 goals (non-penalty). In this match I had his 4 shots with a total of 0.8 xG. You’d like your striker to score a goal from those chances and given those chances Aubameyang scores at least one about 58% of the time.

While I don’t like to see him miss, I am happy to see Aubameyang back at the center forward position terrorizing defenders.

Only one winner by the numbers though it didn’t feel like that on the day.

3 yellow cards for simulation, a record for us. Can’t remember any under Wenger though I’m sure there must have been.

Most importantly 3 points is the key number.

Sure you are not mistaken?
I was told Auba misses loads of sitters every game.

I can’t remember the last time we had a player booked for simulation either. Xhaka was clearly fouled, There was definite contact on both Mustafi and Guendouzi and so the bookings were ridiculous.

Let’s be honest here. If any of those two situations were in our penalty area and we actually conceded a penalty as a result, we would be fuming.

Out of all 3 contacts in that game, that push by Sokratis (who had a good game imo) was the worst and I was actually pleasantly surprised and relieved that we didn’t concede a penalty.

Let’s be honest red-wing. Mustafis right leg is kicked when it’s in the air so he takes a tumble. I’m not sure it’s a penalty because I don’t agree with the contact is a penalty agenda. But it’s not a yellow for diving. Xhaka is fouled, not a yellow for diving. Guendouzi is for me not a penalty, there is contact with the hip but he might seek the contact. But I’m not convinced by the yellow. The Sokrates incident is a blatant dive. The huddersfield striker cuts from the projectery of the ball into the running lane of Sokrates,… Read more »

Either this was an attempt of match fixing ( I really hope not but THREE yellows for simulation?) or the red was having a monumentally bad game.

Does anyone like myself, believe Arsenal should contest these yellow cards for simulation? Mustafi and Guendouzi especially.
This ref lost control, Lacca’s off side goal that never was and the rotating fouls of Cruddersfield was outrageous! Yes we got the win but if it wasn’t for the little man’s acrobatics we would have dropped 2 point and that could have been really telling at the end of the season. These refs cannot be allowed to dictate how things ends up for teams in May with bad decisions. (See Newcastle)

Guendouzi a blatant dive for me and I’m glad he was called out, want to get that out of him- we don’t want him to go all Dele Alli. Other two are harsh- the Mustafi one is probably equal or stronger contact to the Son one last week.

I always enjoy these articles, thanks for your efforts Scott. However I’ve noticed that often the first two graphics showing xG often don’t jive. For example the running xG graph seems to show the Lacazette missed shot where he slipped from a very good position as he was shooting as a very low xG which is surprising as I thought it was one of the 3 big chances listed in the table above. Instead the Auba missed header from the second half corner had a higher xG. The second graph however has a larger xG dot for the Lacazette chance… Read more »

Huddersfield were really aggressive in their tackles hoping to intimidate the gunners. Under Wenger,the gunners would have meekly submitted and would have lost the game.To compound matters,the ref was not that fastidious enough to dish out yellow or red cards. That’s why in the CL and Europa games,these tackles would have merited acard or a sending off. I’m happy Emery has stiffened the gunners in the face of such physical challenges. Believe me the Saints would employ similar tactics . Howevre the gunners of Emery are ready and would fight fire with fire and not cringe . COYG and punish… Read more »