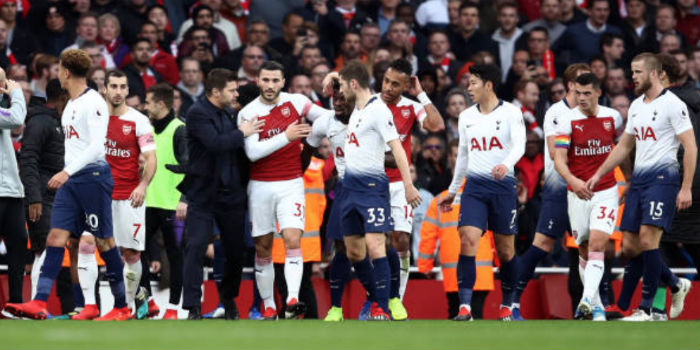 The FA have fined Arsenal and Sp*rs £45,000 and £50,000 respectively for failing to ensure that their players conducted themselves in an orderly fashion during this month’s Premier League encounter at the Emirates.

The north London derby, which we won 4-2, boiled over on the touchline following Eric Dier’s first half equaliser and subsequent celebration in front of the home fans.

Neither side contested the charge, which played into their favour when it came to a decision on how much to fine them.

The report makes for a humorous read; here’s a snippet of their take on things.

Having considered all the evidence and reviewed the incident from numerous angles the view of the Commission was that both clubs were equally to blame for the events that occurred. With regards to Arsenal Mr Lichtsteiner’s intervention prompted the confrontation, it is likely that the Tottenham players would have returned to their half after celebrating the goal if he had not stepped on to the pitch. However his actions could in no way be deemed aggressive and did not warrant the reaction from the Tottenham players and Sissoko in particular. A number of Arsenal players were then involved in the incident and Ramsey and Guendouzi acted aggressively.

As regards Tottenham Hotspur Mr Dier’s goal celebration was provocative. In his witness statement Dier stated that he had been jeered and the subject of abuse by Arsenal fans and the finger on the lips “hush” gesture to them was presumably in response to this. It was, nevertheless, likely to incite the crowd in a match of this nature and was ill advised. There was, however, no excuse for Mr Lichtsteiner to get involved, it should have been left in the hands of the Referee to determine if Dier’s reaction was inappropriate and to then take any action he deemed necessary.

In addition to Dier, Tottenham Hotspur player Sissoko leaves the pitch and confronts Lichtsteiner which led to the incident escalating and further players getting involved and Alli becomes involved in an act in an aggressive encounter with Ramsey and Guendouzi.

Earlier this week a Sp*rs fan was fined £500 and banned from football for four years for throwing a banana skin at Pierre-Emerick Aubameyang during the same game. The judge ruled that the incident was racially motivated.

Unfortunately, last night’s match between the two teams in the Carabao Cup also drew headlines for the behaviour of the crowd after an imbecile in the east stand of the Emirates hit Deli Alli with a bottle. A statement from an ’embarrassed’ Arsenal confirmed that they are working hard to identify the perpetrator.

I want an Arsenal shirt with MR LICHTSTEINER printed on the back.

Yes. Everyone knows the correct salutation for Dier is Mr. Shithead Dier. I don’t understand how they keep making this error.

It’s such a negligible amount it’s easier to just pay up.

For me that 50k is just payment for a fight that won us the game. Sounds dumb but the momentum of their goal was completely negated by that fight. If anything it looked like the Arsenal players were more fired up than Spurs afterwards and we took that into the second half

i like how they’re fined slightly more than us

I liked that too. The FA don’t like us but
recognise that no one at all likes Spu*s

Can I just fine the FA for appalling grammar and misue of the English language? “With regards to Mr Lichsteiner” – nice of the FA to send him its regards. A general lack of correct punctuation also makes it a difficult document to read. Why Mr Lichsteiner and Mr Dier but no such titling for other players also makes it a strange read. If both clubs are equally responsible, why is the fining unequal? If the FA wishes to be pedantic over events, I feel equal pedantry over their report is relevant. Furthermore, its failure to identify Delicatessen Alley as… Read more »

Pedant won’ be happy about you taking his job. But spot on.

My first thoughts exactly. To add to your comment, their report with regards to the titling of Mr. Lichsteiner is inconsistent as they failed at their last paragraph to regard him by his title.
This FA continues to smack of shabbiness and thoughtlessness…… It’s funny really how the FA comes across to me….. Really funny!

Just in time for the FA’s Xmas party this Saturday, have a good one lads ?

I don’t fucking care whether it’s a Sp*rs fan or one of ours, £500 and a FOUR(?) YEAR BAN is not only a fucking joke, but an nigh-on actual encouragement. £10,000, a caution, and a LIFETIME ban ought to be the least he should have got. This guy is sitting somewhere bathed in the kudos afforded by his tosspot peers(?) and doubtless chuffed at the outcome.

Yeah, £500 and a four-year ban is the deterrent that’s bound to deter.