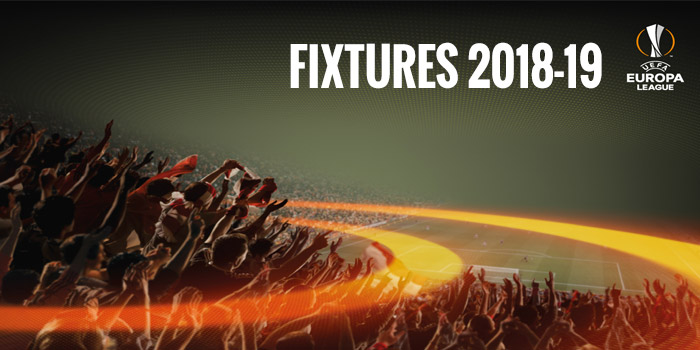 The draw for the first knock-out round of the Europa League was made this afternoon, and Arsenal will face BATE Borisov.

The clubs met in last season’s competition during the group stages with the Gunners running out 4-2 winners in Belarus, and then 6-0 winners in the game at the Emirates.

BATE have former Gunner Alex Hleb in their squad, which adds something to the occasion, such as it is, but it’s a reasonably long trip for Unai Emery to contend with.

We’re away in the first leg which takes place on February 14th, and while most second leg games will take place on February 21st, the Arsenal game is being moved to Wednesday 20th to avoid a clash with Chelsea’s home game in the same competition.

That fixture will have a kick off time of 5pm which is absolute nonsense, but then that’s true of a lot of things about this competition.

Koscielny: We’ll be with Holding every day

Should be easy, don’t have to start with our first team even.

As long as we have our first choice back four, look at what happened against Southampton

I think Hleb still plays for them…

Some game time for the academy boys

Good draw. First leg is on Valentine’s Day, so cancel plans with her inside (or maybe not, it’ll likely be a 6pm kick-off, still time for romance after). We’re home in the second leg. The two matches will sandwich the FA Cup Quarter Final weekend.

Still time for a double round of romance with a 6pm kick off!

If you don’t drink too much to celebrate the victory.

Given that it is played on a wednesday. Would I be correct to assume that this fixture will not affect the match scheduled for saturday the 23th? (TV schedule might, though).

Wrong. EL games are Thursdays (this one at 5.55pm). Southampton revenge is on Sunday (unless it turns into Karaoke Cup Final) and Bournemouth moved to Wednesday with Spuds game likely to move too – but don’t rule out early kick off on the Saturday just to make it worse for us.

Life is just so easy to plan!

Yes the Southampton match has now been updated to Sunday on the arsenal fixture list. When I checked earlier, it was still listed as the Saturday.

5pm?? Seriously?? WTF is that all about? It’s bad enough having to watch sub standard football on the season ticket without having to leave work early to do it

I have a feeling Arsenal may complain to uefa about that 5pm kick off time and it will get switched to 8pm.

the 8PM KO is shit for many gooner who are living outside london too , that mean very often you have too rush to get one of the last train (very often full ) , arrive home very late…
specially this sort of match vs some small eastern team, very few people will want to travel all the way and comeback late to watch bate

So we will have to master BATE again

Story of my life…

Not sure I’d broadcast that tbh

We should take them handily.

I guess the video just was running with a large buffer, but the way it looked at the UEFA website, the draw appeared fixed – results were presented before they had made the draw. Luckily, Arsenal seem to have paid the biggest bribe, because it was a grate selection.

To make it to the Champions League through winning this tournament seems difficult, however. Chelsea, Napoli, Inter, Zenit, Valencia, Sevilla will all be wating for us in the next round. It might – after all – be easier to make the top for in the PL.

We were still in the pot with the last 4 matches to be drawn, and we couldn’t get Lisbon, so there was a 33/33/33 chance of getting BATE or Galatasaray or Fenerbache, and I’m very glad we avoided a trip to Turkey.

I didn’t know we had to play all those 6 teams (7 if you include Hleborisov FC) to win the Europa. When did that rule come into place?

No one said the EL will be easy, but cup competitions are just that. I think asking for one of Spurs and/or Chelsea (or both) to consistently go on a poor form ala United for the rest of the season is probably statistically still less likely than winning the EL.

Similarly, you don’t need one of those two to go on a lengthy bad run, a small dip might be enough. And I really wonder how long can Hazard keep playing 50+ games per season, he’s on 49 game per season average for the last 10, that’s pretty crazy.

Celebrate Valentine’s Day or watch the game against BATE?

Both if you love The Arsenal

Not easy given the travel but should be fairly straightforward

Whenever I open the app using my Android phone, it is stuck in an infinite loop for enabling push notifications. I usually hit back to access the content. Thought I should let you know.

Do let me know if you need any more information on this.

We should be able to master Bate on Valentine’s day

Always the danger when it looks ‘easy’.

That said, we are our own worse enemies.

The only real challenge in this competition would be Chelshit and potentially Napoli.

But we do conspire to make things difficult for ourselves even post Wenger.

Hopefully we will have players mended by then. Fullback situation is slight concern at the moment with Kolasinac and Bellerin with knocks.

Agree with Podcast of course about transfer window. Unai has had us punching above our weight at the moment but Soton was simply a Bridge too Far given Cback/defense resources and qualities. We need a Cback. Mavropanos can go on loan as he is yet unproven. Koscielny is strictly last season, anything from him is a bonus. The Cback from Valladolid cost only 11m euros, is 23yrs and 6’2. I say get him. Also need an attacking wide player so we have variation to Mhkirtaryan, Ozil and Ramsey (one of whom will leave..likely the Welshman) and someone as an alternative… Read more »

HOw funny not too long ago people were dissing Wenger for Top 4 trophy and now they prefer to prioritise it over certain cups.:D

Frankly we need to get into CL. I always mentioned the importance of it but some preferred to dismiss it and tow the media line.

The Carabao cup is rubbish. That said beat Spurts (like Flamini did last season) and throw it.

We need to go for the FA and the Europa.

We have good draws in the Europa and FA cup, so long as we don’t get overconfident. Play some youngsters but keep the big guns ready, we have learned the hard way in the past.

Remember when we used to draw Barcelona or Bayern? Now its Bate Borisov.