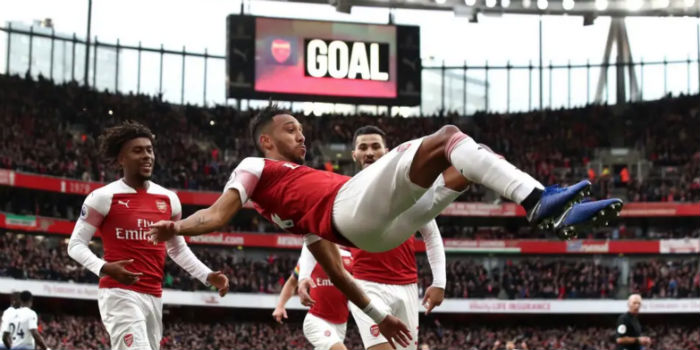 Since signing for Arsenal on 31 January, Pierre-Emerick Aubameyang has scored 22 goals and made six assists in 36 appearances.

His brace against Sp*rs on Sunday, taken with the pizzazz of Thierry Henry, took his tally for this season to 12 goals. Just for good measure, he also weighed in with five tackles, winning more than any other player in Gunners red.

Despite all that, the 29-year-old insists he’s not yet found his best form in England.

“It’s coming. Against Tottenham, I felt very good on the pitch and I am really happy. But my best form is coming.

“It’s the best league in the world so it’s a great challenge for me.

Having started the season leading the attack, Auba has had to make do with a place on the left wing for much of the last two months.

A groin problem for close pal Alex Lacazette forced Unai Emery to return him to a central berth for the games with Bournemouth and Sp*rs and the player maintains it’s his preferred position.

“Of course I prefer playing centrally, but I know that I am can help the team and sometimes the coach puts me on the left side. But as I said, it’s my favourite position, so on Sunday it was good.”

While there’s a long way to go this season, Auba currently leads the charge for the Golden Boot award.

He’s got strong competition from ex-Gunner Harry Kane and Manchester City duo Raheem Sterling and Sergio Aguero have also been in the goals, however, were he to keep up his form, he’d be the first Arsenal player to pick up the gong since Robin van Persie in 2012.

“It’s early in the season and I know that we have good strikers in this league,” is Auba’s take on the situation.

“It will be tough, but I am happy that we won against Tottenham. I think the most important thing, as I always say, is the team.”

Only 22 goals in 36 games, we’ve all been disappointed. Glad he thinks he can improve.

But, more seriously, he’ll be sensational if he does get better, I’m more than happy with the current Auba.

Lots of room for improvement.

He was not sharp enough first half, missed a number of sitters.

This goes for the rest of the team, Iwobi has been excellent but must work on end product too.

Not happy at all. We should not rest on our laurels.

We still finish the first half poorly and if the attack does not do the business (early) we put duress on the defense, give the opponents hope.

We must be less forgiving and kill that hope off early.

What laurels, exactly, are we in danger of resting on? Emery’s made clear that the performances are still not good enough and that the team is a work in progress.

Seriously, what’s wrong with you Santori? You really are the Gooner Grinch.

He’s right Auba is missing chances he should take, which is what Auba is probably referring to when he says he isn’t in full form yet.
But who is in full form in the team?
Mustafi?
I couldn’t name you a player who I think have the ability to play a little better.

Which is great because I think that makes us title contenders if we can push on!

Wenger’s last buy for us…has the potential to become one of our best strikers. He’s 29 and has at least 2-3 years of PL in him (van Persie’s last 30 goal season came when he was well above 30 right?) Then there’s Laca, and its a shame we can’t play both up front, coz they are both EQUALLY good there. This is something that has not happened to us in some time…two world class strikers, both in lethal form, and both at their best in the same position! Emery has a real conundrum here, a good one, and its good… Read more »

Pretty sure Wenger had little imput on this transaction, other than the back office team asking him, “Want Aubameyang?” and Arsene replying, “Sure.”

Getting a rebel player on the wrong side of 25, coming from another league, middle of the season, a lot of deliberation went into that reply I’d say.

I agree. I feel the team looks like its starting to purr again and the players are now getting to grips with the methodology. Emery is beginning to introduce different formations now because of that and we are looking unpredictable in a good way. Meanwhile, if Auba can get even more unforgiving (His first half was not the sharpest), we can put away games quicker and perhaps end the half better. IF we should beat United this Weds by a handsome margin, there is of course the added bonus that we may consign the Special case to his P45. Won’t… Read more »

This post is in stark contrast to your one above.
Makes me wonder if it’s even the same Santori.

Anyone know how many of his goals were assisted by Ramsey, or even that Ramsey had a big part in?

I don’t know, this is about Aubaaaaaa

What a goal poacher & down to earth guy our Auba is. Great attitude. Seeing his smiling face perks me up.

What a 2nd Half from Arsenal

Auba, Auba, Auba… Aubameyang! I really wanted a Hat-trick, but it’ll be sweeter coming at the homeless Goblin’s.

Chidi
Reply to  What a 2nd Half from Arsenal

Wherever that is these days…..

Pierre going on like he’s Frieza.
“You fools, this isn’t even my final form.”

Always cracks me up that you constantly refer to Kane as an ex Gunner Andrew ?

He brought some serious attitude, maybe even swagger, especially after his 2nd that I think brought the intensity of the entire team up. Almost as if they all had the same thought bubble during the celebration “f these guys, no way we are losing this”

do you think he’ll start as cf v man u,…..or laca? i think auba might go wide again. as laca is due a game but isn’t considered for wide positions but on the other hand he is politely making it clear he doesnt want to. Im not sure why Laca cant play wide tbh, might be not his favourite but thats true of Auba too. He’s quite quick, can pass and cross, works harder than auba. he played pretty wide on sunday. Do you think Emery hit on something by the Rambo type player through the middle with the two… Read more »