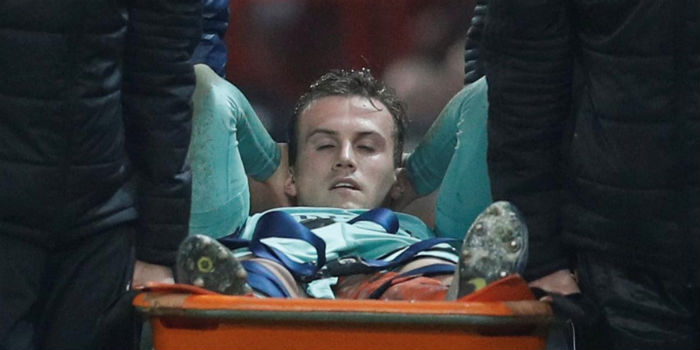 Arsenal’s medical team fear that Rob Holding has suffered a big injury after the centre-back was stretchered off in the first half of the Gunners 2-2 with Manchester United at Old Trafford.

The defender, who has been a mainstay of Unai Emery’s defence in the last few months, seemed to twist his knee on the touchline and required oxygen as he dealt with the pain.

Speaking to the BBC after the game, Emery revealed: “The worst news is the Rob Holding injury, the doctors think maybe it is a big injury but we are going to wait (to find out), it is his knee.”

Obviously, ‘big’ injuries to knees tend to involve ligament damage. If it’s medial, we’re talking a few months, if it’s ACL it could end his season.

The Gunners also lost captain Aaron Ramsey to injury in the final moments of the first half. The Welshman rolled his ankle and was replaced by Henrikh Mkhitaryan. The prognosis for the midfielder was a bit better.

Emery said: “Ramsey I think is a small injury but they [the medical team] showed us that afterwards every player responded with a good quality.”

The games are coming thick and fast right now. Granit Xhaka will return from suspension for Saturday’s game with Huddersfield and we’re hoping Mesut Ozil also recovers from his back problem.

Nacho Monreal and Laurent Koscielny are both closing in on returns, but any long-term problem to Holding will still be a massive blow. We wish him a swift recovery.

Don’t forget English is at least Emery’s 3rd language (if not 4th) and he will continue to get better at it.

I just wish he didn’t have to use it so often when referring to injuries.

judging by the amount of downvotes, I’m the only one annoyed by “big” 😉

Get well soon Robbie, the team will surely miss your present in your post. We feel more assured defensively with you there

Really gutted as he was just coming into his own and showing the consistency in quality he had threatened the last couple of years. Is it worth considering recalling Chambers?

Rob Holding has been one of my players of the season so far. Please don’t let this injury be serious.

Maxin In The Shade
Reply to  Little Mozart

Finally looked to be coming into his own. He’s been solid all season.

Get well soon my ‘English Cannavaro’.
I hope it’s just the precautionary early assessment and that it’s nothing that serious.
Rob was slowly becoming our best CB.
Get well soon mate

Gutted for the young man. I am Holding my breath in hope he has a Rob of the green from the medical team.
Brilliant defender with a huge future he is.
Thanks Arsene.

I guess this kills our 3-man defence, seeing as we were using all available CBs already. Waiting on Kos but also isn’t Mavros expected to return this month? Gonna need him and others from the academy to make it through.

Monreal can slot in to the left side of the 3. AMN can still provide cover for Kolasinac at wingback. I imagine emery will try and stick with the back 3 for now but perhaps with our next run of games being against weaker sides he may view a back 4 as sufficient.

Saw the replay on Arsenalist.

Why are my comments back to being moderated again?

I thought this issue was fixed, blogs.

This is god-awful news. I certainly hope it is not the case. As other have said, he has been stellar this season. When he is in the side, I feel confident. Let’s hope it’s not as bad as they are thinking.

So so gutted for Holding. He’s been incredible this Season. Life can be so unfair at times.

If it’s ACL that is a disaster. He has been by far our best defender so far this year. Very composed on the ball. I think we will have to get another CB in Jan if he is out for a long time.

This really changed the match image too. He has been excellent at playing out of the back. Defensively, we conceded because socratis was shifted out and he wasn’t there to cover for Kola… Just his injury alone impacted the game.. such is his influence. He will be back and he’s a potential a future CB Arsenal legend. We need a Januiary signing. All hopes for Mavro right now too. Get well soon Holdin!

Just hope this is not as serious as Emery thinks but sadly it doesn’t look good. Still we have Chambers. Oh! I forgot.

It isn’t oxygen that injured players get given, but entonox which is a mixture of oxygen and nitrous oxide (laughing gas) as that actually gives pain relief where as oxygen does precisely fuck all in this situation.

This is obviously nitpicking and unimportant, but I’ve seen the mistake here multiple times and it annoys me a bit. If you could get this right in the future my life would be ever so slightly better.

I was listening to the match on Radio5, the commentators fucking jinxed Holding! They was saying how he’s become a mainstay in our defence…1 minute later, he’s fucked?

Devastating loss with Holding as he was playing so well and to me has been our best defender. Just hope it’s not the ACL.

Really hope that him, chambers, Julio and Konstantinos become our future mainstays.

We need all our Cbacks.

Koscielny himself is a bonus if fit.

Lichsteiner will have to come in as a make shift IMO. He has the experience. Elneny has been tried there too against Volskra (of course a different level) but he may have to be another back up (not ideal but he has played OK before as Cback)

Gute Besserung Holding. That was rugby from that cunt Rashford. Fella is a disgrace of a man and footballer. COYG

Gutting. He’s been having a great season so this is a huge blow for both him and the team. Our best ball playing centre back, in my opinion, and offers something different to Mustafi and Sokratis. Fingers crossed.