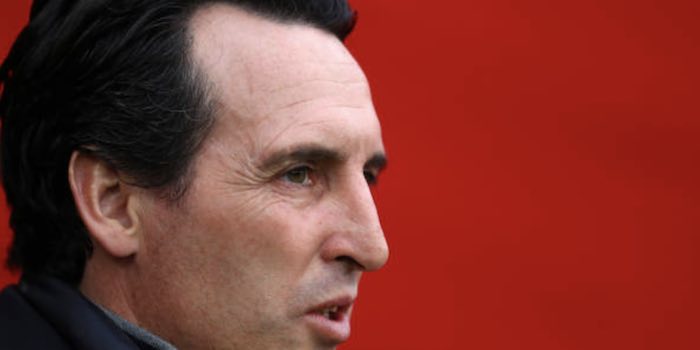 Unai Emery says he’ll pick the best players available to him for tomorrow night’s North London derby with Sp*rs, but hinted at some measure of rotation which would see him use some of the young players in his sqad.

The Gunners face the old enemy in the quarter-final of the Carabao Cup with some injuries to contend with after a gruelling recent schedule, and with upcoming games against Burnley, Brighton and Liverpool in the Premier League it seems like he’s going to shuffle his pack.

Speaking ahead of the game, the Spaniard made it clear he wasn’t taking the opposition for granted in any way as he looks for a second derby success in as many weeks.

“Our first idea is that we play with the best players that we can use tomorrow in this derby,” he said.

“I say to them that in every match, we need to respect the opposition. Against Southampton, against Tottenham, against Manchester United, against Huddersfield, it’s the same.

“This respect is by playing with a big motivation and a lot of excitement to win against them. We must respect this emotion in every moment.

“The emotion is not bad. I think showing our emotion, the players, the fans and me, is good, but every time we must respect them.”

The likes of Aaron Ramsey, Mesut Ozil, Petr Cech, and Alexandre Lacazette could all start, supplemented by some young talent.

17 year Bukayo Saka trained with the first team and is expected to be included in the matchday squad.

We need to play a strong team, who wants to see Sp*rs win at our stadium?

Feels like a lose-lose quarter-final, really; win this and you get an extra two games in January, lose and you lost a derby. Win the ultimate prize and it’s “only” the EFL Cup (bigger for them than for us, as we’ve won both bigger and more recently).

And why the hell is the semi final played over two legs?! Is it purely $$$? Seems so unnecessary and counter productive

Sp***s are going to lose to our young team tomorrow night, then lose their manager and star players to manure at the end of another trophy less season. All looking good for their new toilet of a stadium. Sp***s the gift that keeps giving.

I don’t think Spuds will play their 1st team as well.
The result will be down to the performance of the fringe players.

Pochettino confirmed Gazzaniga will play in goal, and Foyth will be in their squad, but didn’t give much else away about which kind of team he will put out. I think our squad depth is stronger than Spurs though. We could play Ozil, Ramsey, Lacazette, Cech, Sokratis, all fresh from the weekend. Hope Aubameyang is on the bench to come on if needed.

as of right now . i think spurs have better squad depth than arsenal. arsenal have lot of players, but the quality of all those players is questionable. think about centre backs we have a few good ones, but spurs have vertongen, alderwierald, sanchez. three amoung the best centre backs in the league. even in attacking department we might have a lot of quality players , but are they all the players emery want to play. spurs on the other hand can play any of the 4 or 5 players they have and it would still look like a pochettino… Read more »

Both squad have 19 full internationals. Including long term injuries. I think this is a good arbiter as the players have been picked to represent their countries by international managers, paid , appointed objective knowledgeable men of the football , rather than so called knowledgable pundits .
Arsenal will win tonight. Harry Kane is injured. Up the gunners.

Agree/ Sp*rs have a busy schedule ahead just as much as we do. This is the lowest priority competition for us. Yes, of course we should beat that lot. No, we shouldn’t line up at the expense of losing more of our key players in a month with so many league points on the line.

Reckon he will turn up again in prem. At a club with new or ambitious owners, Newcastle, West Ham, Everton , and potentially villa, wolves, Fulham, rich owners..
Milan clubs, PSg, turkey, Marseilles,
What you reckon?

I think he’s a cunt

Hopefully he will go far away from us

The specialist in losing dressing rooms and getting sacked.

The Toxic one! The Manure tailspin continues.

Honestly I was hoping it would continue

Arsenal 3-1 Spurs
Saka to score his first goal for the club.

We mustn’t affect our players who will play at the weekend. I know its Spurs but it’s only the EPL. Let the young players show their talent and passion and prove they are worth a place in the first time. We are desperate for more fringe players to come into the first team so they must be given a chance. Never lose sight of the bigger picture even if it is them lot we’re playing.

What shall we do guys with this shaking defence

he has got to, we are down to our bare bones, we need all our best players for the league, if we get knocked out so be it, top four spot is far more important

Will anyone be more motivated for this match than Jenkinson?

Would be amazing if Jenko could get a hat trick!

I think Ozil, Ramsey, Monreal will all start and maybe even Koscielny if he recovered well from the game. They all need to get match fitness. Ozil always needed a few games in a row playing that he hit form. Rest never did good to him. Lacazette will probably start too. I don’t get some fans why they don’t want to play this cup. I always enjoy watching Arsenal so I want them to go as long as they can in every competition.

Citeh still in comp means we’re up against it even if we beat Spuds and Chelski go out before then. This cup gets us a EL place but EL win gets us back to CL.

I know but mostly we didn’t play EL with the first team and we probably also won’t in the round of 32 so we should be a fresher than the rest of top 6. Too much games shouldn’t be an excuse to not want to win the game tomorrow.

We can’t show the same respect for every opponent in this league. I love how hard we are working against everyone, but we can’t walk out against huddersfield with the same mentality as a game against Man City. These player also need to play to their potential and caution is not gonna bring that out of them. It’s understandable against the top sides, but these players should know how well they can play by performing against the smaller sides. One nil to the Arsenal in this day and age where even the lowest team in the league has money to… Read more »

I kind of agree but we have to remember Emery has only been managing in this league for a few months. Eventually he will realise that if you give some teams encouragement we will struggle and lose games and points.

Technically, if its 1-0 to the Arsenal in 38 league games, then the leageue has been won. And therefore, the top side.
But I see your point 🙂

We have to win at home , it’s our fortress, let’s kick some ball and take number

He’s had us punching above our weight. BUT we should in truth be where we are (Wenger never dipped below 5th) Still we are 3 points of Chelsea and slipping. He will need to ensure the defense i particular can see through this hectic period. SO not surprise if there will be some give even if we are up against our shadows and need to bring them down to earth a bit. I’d expect we field a strong enough back 4. Koscielny is being thrown in too soon so likely he will sit this one out. We won’t risk Mustafi… Read more »