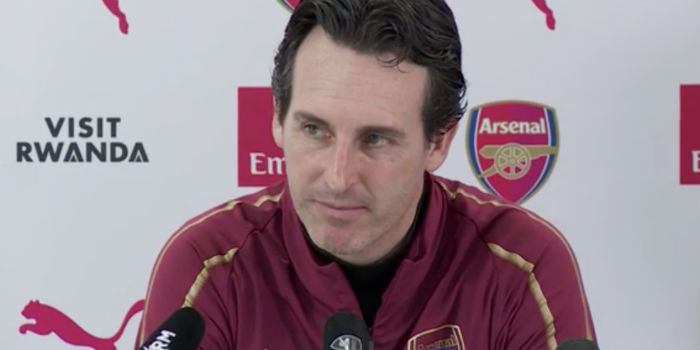 Unai Emery has described Arsenal’s defeat to Southampton as a ‘reality check’ but thinks his players can turn the end of their 22-game unbeaten run into a positive by doubling down on their efforts to improve.

When a side goes so long without defeat – in our case 121 days – there’s always a worry that an unexpected result can kill confidence and disrupt a side’s rhythm.

Emery knows, that the Gunners can ill-afford for that to happen at this point of the season; not only is the next game a north London derby in the Carabao Cup, there’s also a three-point gap to close on the top four in the Premier League.

“Sunday for us is a big reality check in our way,” said Emery ahead of the quarter-final showdown with Sp*rs.

“We need to improve and also we need to continue doing our way in our process.

“It’s not a good result but this reality gives us more motivation to continue to work hard, finding a new thing to work on each day, and also it makes us demand a lot from ourselves in the way we work on this way.”

Having had a chance to review the action at Saint Mary’s the Spaniard was keen to point out that it wasn’t the Gunners worst performance this season but that his players still need to tighten up defensively, whether they’re short of numbers or not.

“We can win, we can lose,” Emery reflected. “We’ve won matches playing worse than we did on Sunday. Football is like that.

“We need to continue improving. Our analysis shows us it’s the first time we’ve conceded three goals in this process.

“There are no excuses because we don’t have a lot of centre backs. I think it’s a little bit for all the players, all the positions on the pitch.

“It’s also because they [Southampton] did their actions against us well. We need to improve by not conceding as many chances to the opposition. A clean sheet is very important in each match. Tomorrow is the next.

“A scoring moment is very important and we are second for that in the Premier League. But we need to do better in our balance defensively, and our hard work now is this.”

Funny how it is only now appreciated that a Top four trophy is more important than certain piddly cups.

Back in the old days with Wenger, some people (including the ever insightful media) were having a right moan about Top 4 trophy.

Suddenly, this is something to be celebrated particularly with the Spurts by the same media pack that derided Arsene for saying it.

Yet here we are aspiring now for the Top 4 pot.

TOP 4 has always been the minimum requirement. CL Money. Thats what its all about.

I sort of agree. But Wenger was derided for just about scraping 4th every season, whereas we’re hoping for 4th for a new manager who is adjusting to the team and the league, and a squad that’s been depleted over the years by Wenger’s managed decline of the clu.

Aston Villa was pushing us for top 4 under that period, whereas now its really 6 top clubs every year.

That’s human nature my Brother. You never know what you have until it’s gone.

Context is your friend

Think Cech will get a go for sure tomorrow. Probably Lichsteiner and Sokratis in a back 4, particularly if we play Monreal. Even if not, considering paucity of options but its an old pair at the back so the central mids will have to cover and be aware of runners into the box. AMN should anchor one of the flanks at very least. Don’t like the idea of the limited Jenkinson but Monreal just coming back in to squad may be rested. Other option is Pleguezuelo but we haven’t seen him since first feature this season. In midfield we have… Read more »

Jenkinson gave good performances recently when given the chance. Players for you are either not good enough whatever they do (Jenkinson) or always world-class players even if the performance does not follow.

It’s a reality check for him as well. It’s appalling that it’s Christmas time and we haven’t led a single PL match at half-time so far. We have to start taking the lead and be able to control the match from there on if we are to seriously fight for a top 4 spot. When you lead, the other team has to open up which should suit our attacking players as well. Next, he has to find a way to accommodate more of our big names in the starting 11 (they’re big names for a reason). I get it, not… Read more »

I think the defeat showed that we are maybe a bit too cautious, rather than not being good enough. We have been getting away with allowing every team the opportunity to dictate the games we play, whether its with the ball or like at Southampton where they dominated us without the ball. Also our lack of an attacking midfielder is really starting to show in the reduced amount of chances that we build up. There is no connection between our midfield and our attackers, unless Lacazette plays. Emery should really look into implementing the 4222 again, it suits his players… Read more »

You mentioned we lacked attacking midfielders even though we have Ozil and Mikhitarian who is not even performing well on the wing bar the game against Southampton. I think Emery should demand much better consistency from these two.

Let’s be honest we haven’t really improved defensively from last season. We have some very tough away games still too play and if we can concede 3 against a low scoring Southampton it is a concern. Emery needs better players in defence, it’s that simple. What we have, hasn’t been good enough for years now. serious investment is required over the next few transfer windows or we’ll get left behind.

If I’m not mistaken we’ve actually conceded more goal this season than we had at the same time last year under Wenger.

He has to play in a Lab jacket however.

A whole lot of levulinic acid from the Flamster right now would really help us in our way in our process.

“Our analysis shows us it’s the first time we’ve conceded three goals in this process”
That’s the kind of insightful analysis we pay the megabucks for.

yes, it is, this team is no where as good as some fans think