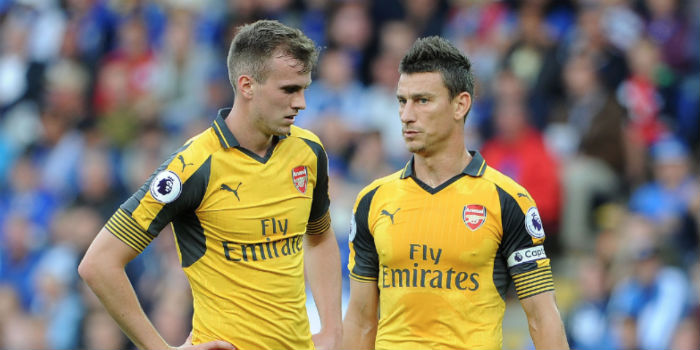 Laurent Koscielny says Rob Holding will have the full support of the Arsenal family as he works his way back from the knee injury which is set to sideline him for up to nine months.

The 23-year-old ruptured the anterior cruciate ligament in his left knee during the 2-2 draw with Manchester United and is set to undergo surgery this week.

His road to recovery will be a long one, and Koscielny, who last night made his first appearance after a seven-month layoff of his own, knows there will be ups and downs along the way.

“I sent him a lot of messages,” the Frenchman told Arsenal.com after his comeback in the 1-0 win over Qarabag.

“It’s a difficult period for him but he needs to be strong, and to stay strong,

“I know he’s a defender so he likes to fight, and the most important thing is to be with him, to help him every day.

“We know during rehab you have some good moments and some bad moments, because you don’t always progress as you wanted. But he knows we are all here at Arsenal for him, we are his family as well.

“So if he wants to talk or come with us, he knows he can come because it’s our family.”

Koscielny admitted earlier this season that he seriously struggled with the mental side of being sidelined and even called out his national team boss, Didier Deschamps, for the lack of contact.

With that in mind, you can be sure that our club captain will be doing everything to help Holding through this tough period.

Well said Lolo…if anyone knows what it’s like to be in Rob’s position it’s him…and yes we are a family at Arsenal and look after our own.

I didn’t think I’d be able to love this bloke any more, then his smile yesterday after returning absolutely crushed me. It showed what it meant for him, not only to represent Arsenal as our captain, but also just to be back on the pitch.

I know for sure he’ll have wondered whether he could come back at his age with such a bad injury, and he’s done us all proud.

Now this interview…I just love everything he represents.

I’m sure they will not withhold any kind of support.

Remember when Per and Rob Holding destroyed Costa and Chelski?

Reminds me of the Stronger documentary Arsenal posted earlier. Kos knows how important love from your family, club and national team colleagues can be for coming back stronger than before.

Here’s to hoping we get Rob back better and stronger than before. He had really turned a corner this season.

How long was it ago? When we screamed at him for that last min mix up with sczescny

It is interesting to read that Koscielny and the entire Arsenal family will be with Rob Holding all the way through his recovery. A very positive sentiment! Unfortunately though I don’t hear the same said about Welbeck. The only comments or articles I read on Welbeck is for Arsenal not to renew his contract. It seems to me that there is some preferential treatment going on in Arsenal. Koscielny is 33years old, is prone to Achilles problems, was out for nine months and no one suggested his contract not be renewed. He comes back is being held up as an… Read more »