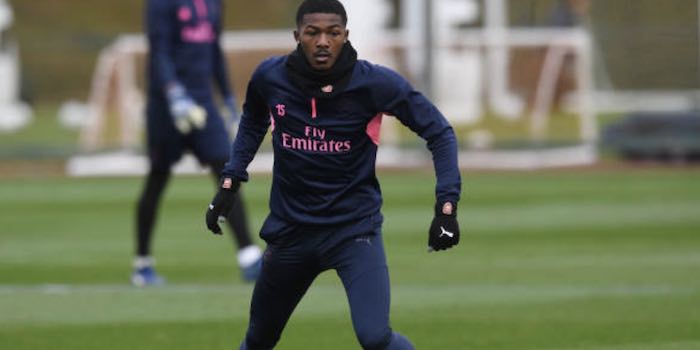 Having been one of the bright spots during what was a difficult campaign last year, Ainsley Maitland-Niles might well have expected to play a big part this season too.

However, a serious injury on the opening day has hampered his progress, and thus far he has made just four appearances.

He also has to win over a new manager who isn’t afraid to give young players their chance, but so far his playing time under Unai Emery has been limited.

The 21 year old revealed he’s had a conversation with the Spaniard about his situation and says it’s down to him to prove to the boss that he’s got what it takes.

” I still feel like I am improving and getting back to my best,” he said ahead of the Europa League clash with Qarabag on Thursday night.

“Me and the manager have had a conversation and he’s told me things that he wants me to improve on, so all I can do is go away every day and wake up and think how can I get better at this?

“By a certain amount of time the manager should be able to see it in me.”

Pressed on what those areas of improvement were, he replied, “It’s more of a personal thing between Unai and me honestly, but I think as long as I know it and he knows it and we both agree it, that’s all that matters.”

The versatile academy graduate is expected to start tomorrow night, and it’s chance for him to impress on the pitch as well as off it.

His comments about Raheem Sterling and the racism he suffered himself are well worth reading, and with a good head on his shoulders he’ll have a good chance of forcing his way into Emery’s thinking.

Qarabag an important fixture for Maitland-Niles and Smith Rowe

It’s good that he recognises and accepts that he is not the finished article yet, and is showing the willingness to become a better player- it’s good for him, and for Arsenal FC. Really hoping this lad comes good for us, seems like he has a good head on his shoulders, likeable, Arsenal through and through, and seemingly has the raw ingredients to be a top player.

I like his media nous too. Outspoken about the racial issues, yet treating the media like mushrooms when it comes to personal development or his ‘weaknesses’. Good lad.

He needs to be forceful.. we all see his obvious potential.. if it’s one thing that’s lacking is that, he doesn’t try enough to exert himself in the game to make his mark..

Also he needs to start playing in a fixed position for his personal good..

Not related but anyway…

Tony Adams: Rugby League names former Arsenal & England defender as next president.
and I’m hoping to get a call up as next Prime Minister.

“It’s more of a personal thing between Unai and me honestly, but I think as long as I know it and he knows it and we both agree it, that’s all that matters.”
Great Response

Keen to know where Emery seems him as.

I know the initial talk under Wenger was as a DM and that may be the case still, but if not I feel he has all the attributes to be a back up and competitive presence to Bellerin in the fullback role.

I think he could be the ultimate box to box midfielder. Have the physique, technical ability, speed and agility…just like Paul Pogba was at Juventus. Just need the right guidance and fortunately, he has that in Emery.

I think he has a big future here, I really do. I like his attitude.

I feel that Emery has big plans for him if he can improve his decision making and impact the play positively. He is a real athlete, has speed. I really am hoping that he improves his game and gets more playing time.