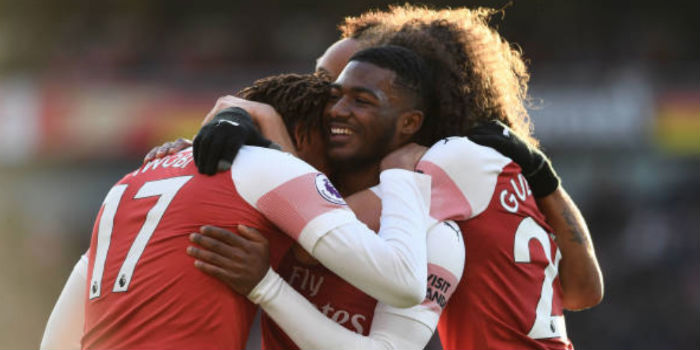 Ainsley Maitland-Niles says Arsenal’s 3-1 win over Burnley was ‘tough’ but that a win was very welcome after two consecutive defeats.

Having surrendered their 22-game unbeaten run at Southampton last weekend and then fallen to defeat against Sp*rs in the Carabao Cup, the Gunners knew they couldn’t afford another below-par performance.

They looked nervy when Ashley Barnes reduced the deficit to 2-1 this afternoon before Alex Iwobi’s stoppage-time third put a gloss on Pierre-Emerick Aubameyang’s brace.

“Especially after losing two games in a row, it’s nice to be back to winning ways,” Maitland-Niles told Arsenal.com.

“It was a scrappy game, but I think the boys dug deep and we got enough goals to secure the win.

“I found the game very tough. Every game is tough, it’s just about the mindset, the manager has always urged us to press and I think we carried that out pretty well today.

“I was just trying to encourage the boys as I go on and I’m just grateful to be out there.

“The games [against Southampton and Tottenham] were over, there was nothing we could do about the last two games, so we focused on this one and look at the result today.”

Mainland Niles has real ability on the ball and fantastic athleticism, I think we’re going to see a lot more of him in the second half of the season.
Hopefully we start with a back 4 against Brighton, with Niles and Kolasinac at full back, it’s really aggressive and worked really well today until Monreal went off injured and we moved to a back 3

He played better this match, hope he keeps improving as he’s a lot of potential.

AMN – We have to remember he is a young player and learning. It would be silly to compare him to Bellerin. On this showing some good and bad but in general very positive. Got involved early on with a well controlled short pass to Ozil to work space for the eventual opener. Got passed a number of times in defense but Lichsteiner had him covered and he kept his calm collecting secondary threats. Got stuck in as well contesting a number of testy aerial balls. not all forward movement paid off but assured on the ball with decent control… Read more »

I like AMN. Seems like a quiet lad but he has talent and a certain toughness to match it. I liked that he went over to back up Papa in his wrestle with Barnes and then just got on with playing his game. And he did the same after getting clattered on the head by some twat in the 2nd half. Also he is usually forward looking with his passing and can beat a defender with a bit of skill. Hope we will see more of him this season

Nearly had a goal against Dyche’s ogres. He looked like he’s starting to get his match sharpness and confidence on the ball back.

It looks like he’s got a chance to get back into the side more regularly and a run of games- so good to have a solid young player like this growing through the ranks.