The cliché that there are no easy matches in the Premier League and this match week illustrated why there is some truth to it.

Current League leaders Manchester City dominated for most of their trip to Watford before giving up an 85th minute goal and having a nervy final few minutes.

Chelsea traveled to Wolverhampton, went up early before conceding two goals and suffering their second loss of the season.

In this context traveling to face the plucky mid table side from Manchester, especially on short rest after an intense derby and escaping with a draw doesn’t look to bad. It certainly feels like two points lost instead of a point earned but even with their place in the table this was never going to be an easy match for Unai Emery’s men.

ManU 2-2 Arsenal: By the graphs 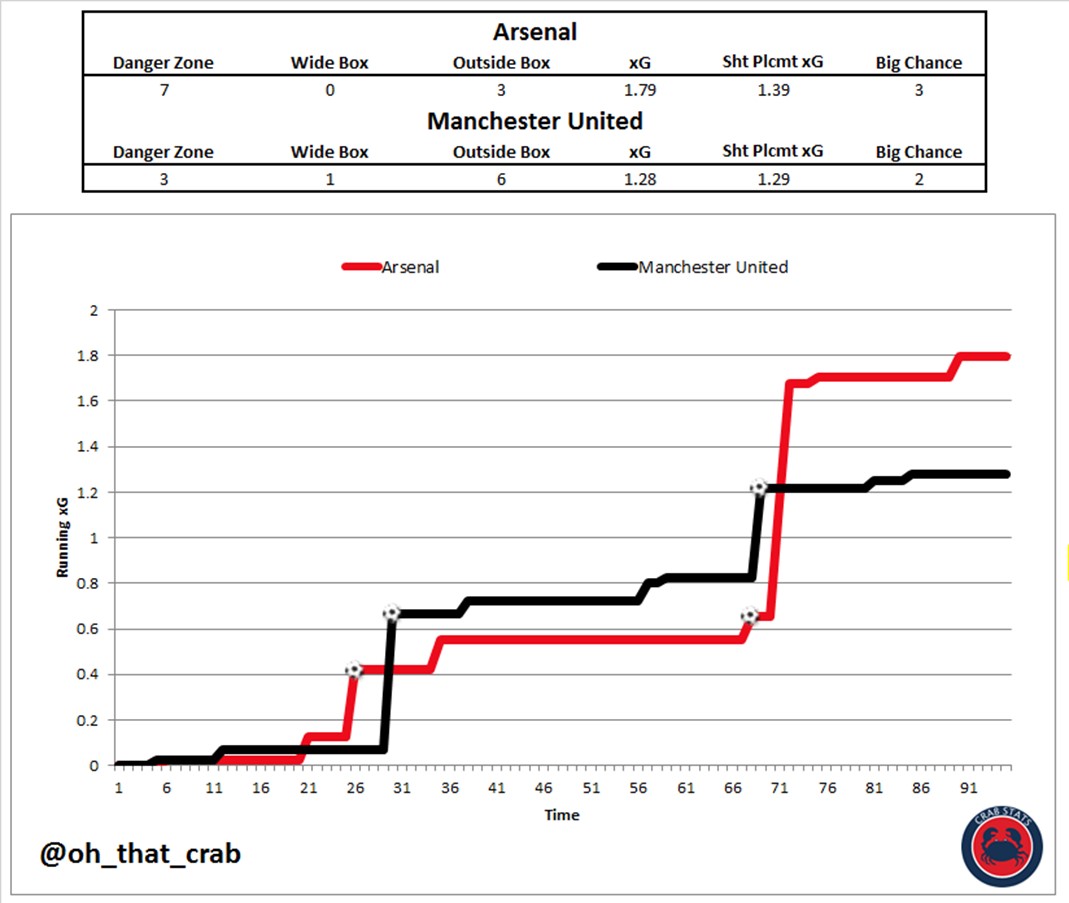 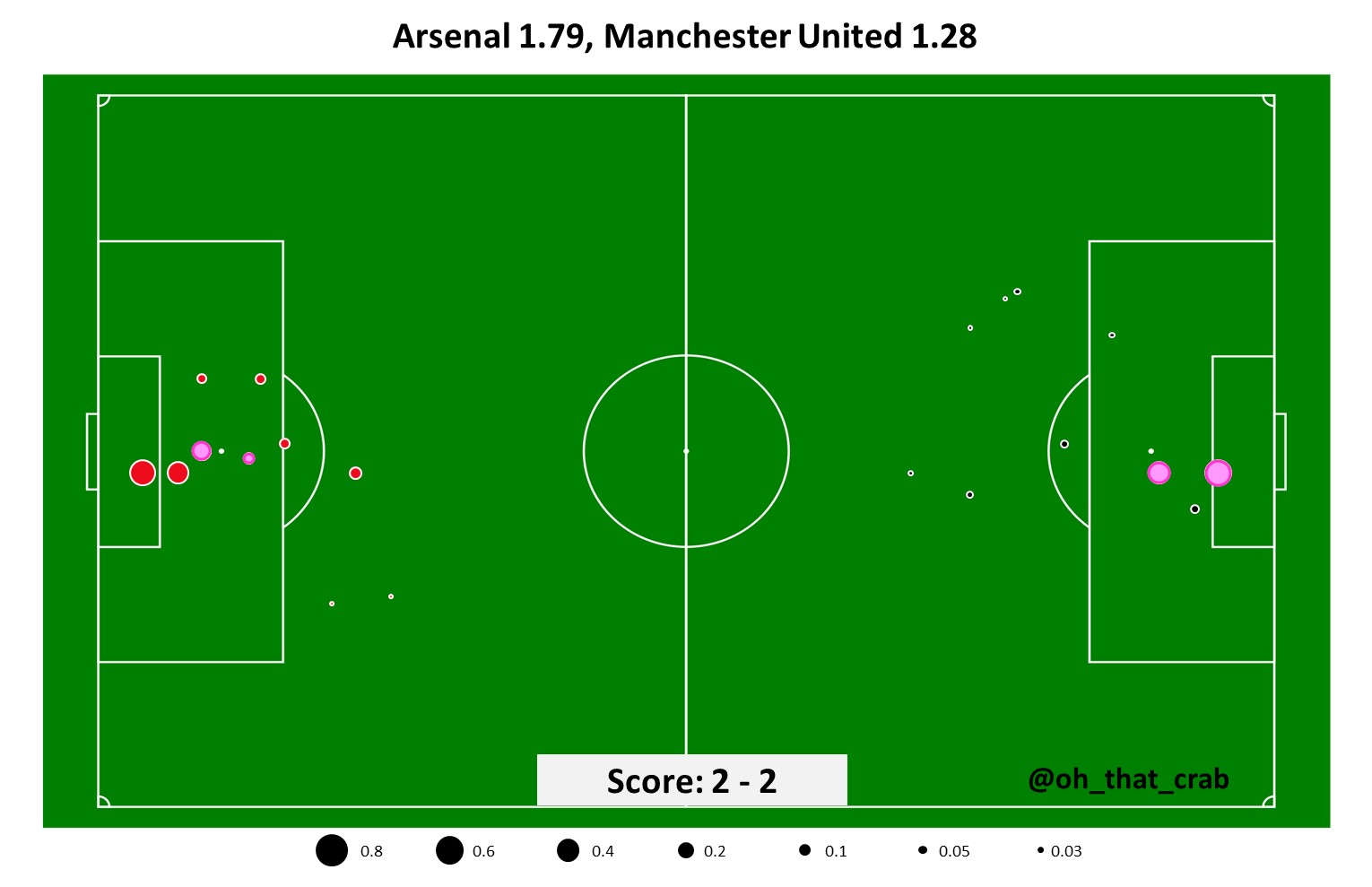 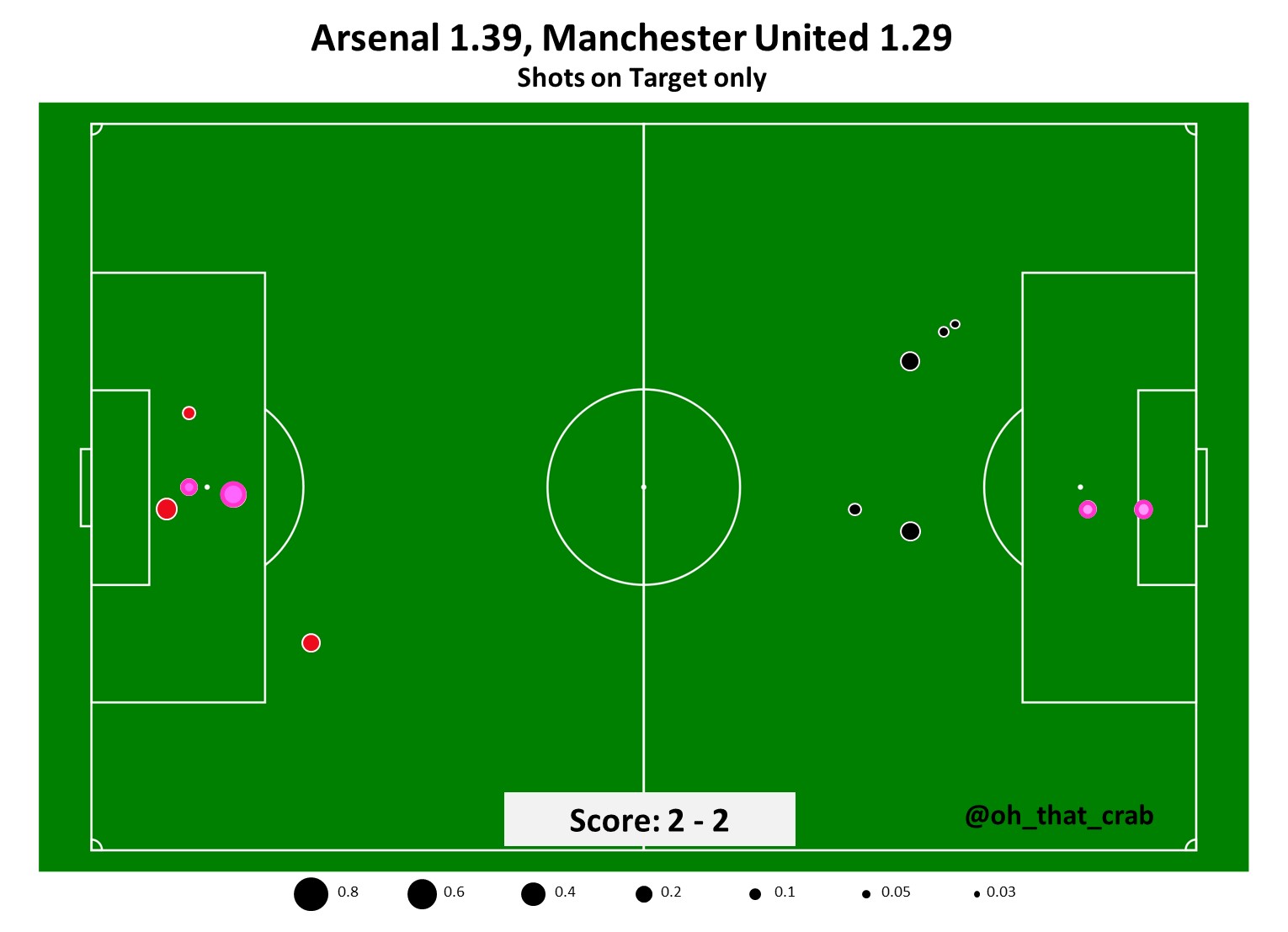 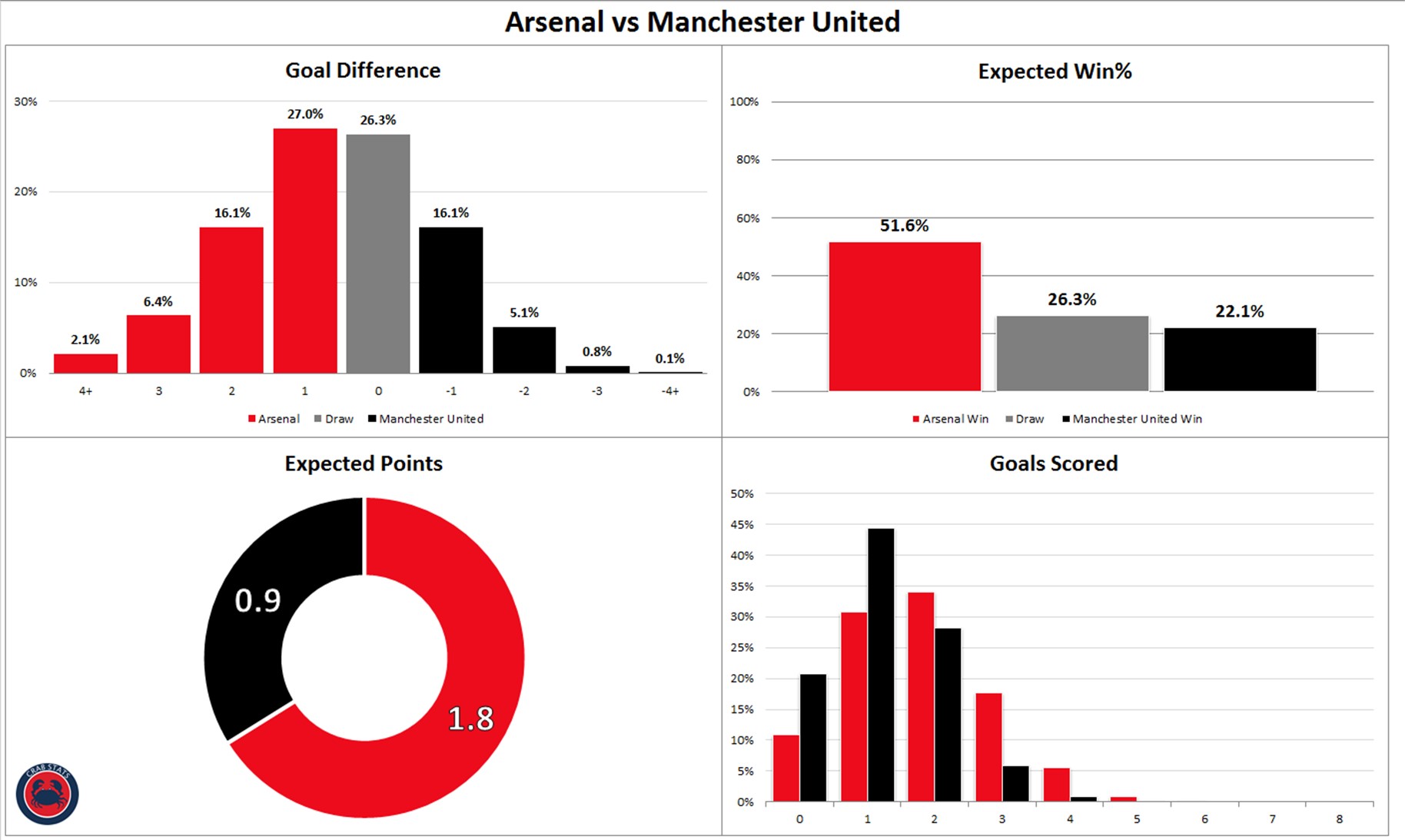 ManU 2-2 Arsenal: By the numbers

A game of errors

8 – The number of Arsenal players watching and not moving as an offside Andre Herrera collected the save that turned into Manchester United’s first goal. 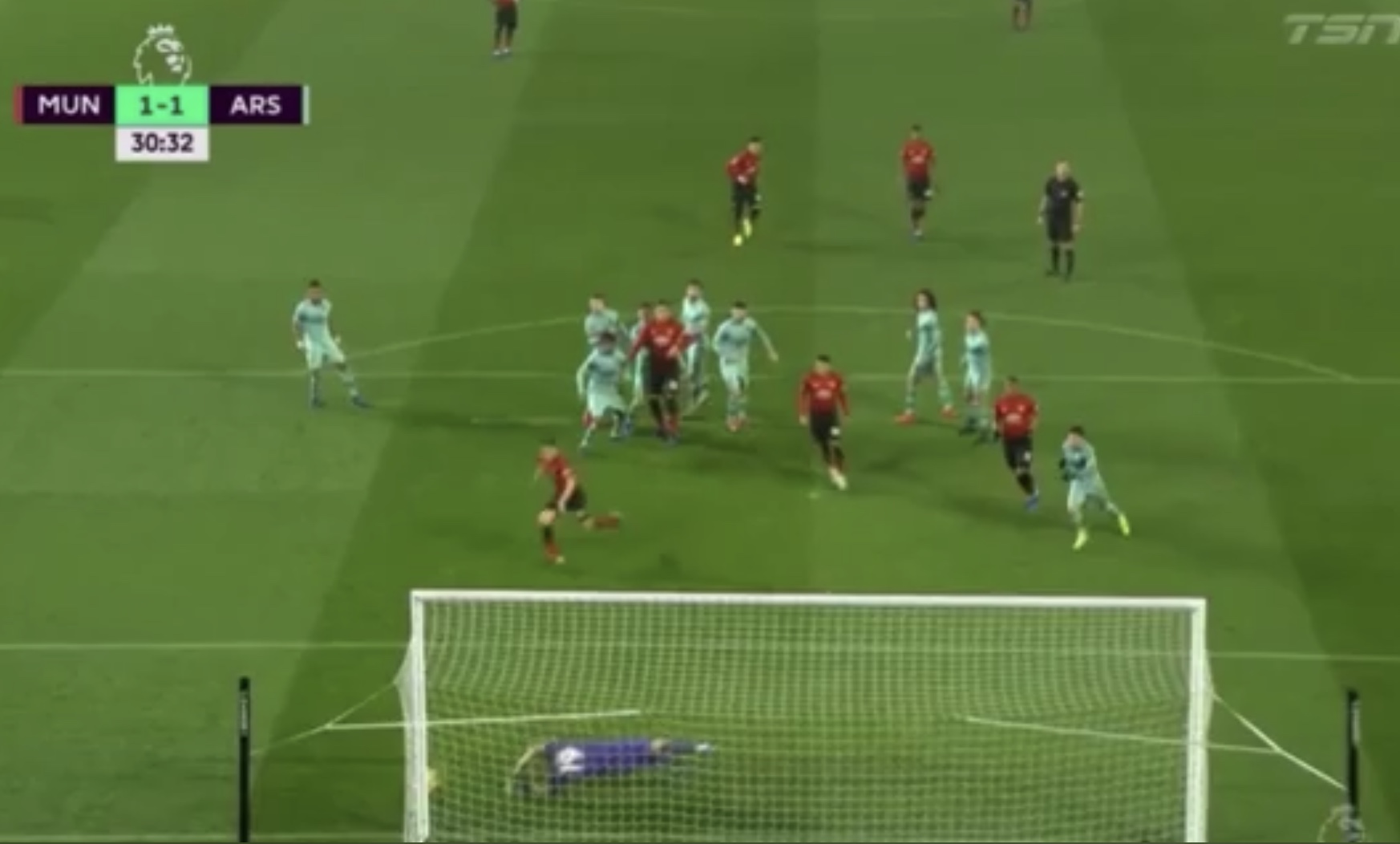 Last weekends North London Derby was the Premier League at its finest, this definitely wasn’t. Both teams were incredibly sloppy in this match and both teams looked tired from playing on short rest.

After this performance you can totally understand why Jose Mourinho stresses that the team with the ball will make mistakes. His team were atrocious in this match while Arsenal did there best to match their level.

Guendouzi grows into the game

30 – Number of passes completed in the first half, of 35 attempted for 85% completion

35 – Number of passes completed in the first half, of 39 attempted for 90% completion

19 – Number of forward pass attempts in the first half, 54% of his first half passes

23 – Number of forward pass attempts in the second half, 59% of his second half passes

Matteo Guendouzi has been asked to make some big starts as a teenager with starts against Manchester City, Chelsea and now Manchester United. He hasn’t always been perfect and has made the mistakes expected of a young player but he certainly has never looked overawed by any of the situations.

In this match, it looked like United keyed on him as a player to pressure. Guendouzi handled it fairly well but played things pretty safe and didn’t as much progressing of the ball as normal for him. In the second half with a combination of United sitting deeper and possibly more confidence he became the focal point of our midfield thrust to advance the ball.

Looking at the statistic that I have for offensive value added that looks to measure how well a player progresses play with his passing and carrying of the ball backs up this observation. In the first half Guendouzi was a 0.02, essentially doing little to aid in Arsenal’s attack. In the second half he was able to impose his influence on the game more, especially with his combination play on the left with Sead Kolasinac and produced 0.23 in offensive value added.

As with any young player there will be growing pains and mistakes but the resilience and confidence of Guendouzi’s play really sets him apart in my mind.

47 – Goals scored by Arsenal during this unbeaten run, 2.35 goals per match

48 – The number of points Arsenal have collected during this run

73 – Points my projection model, projects that Arsenal will finish with

75 – Points the betting markets project Arsenal to finish with this season.

After a rough start to his Arsenal managerial career, Unai Emery has gotten Arsenal on a very impressive run of form. The performances weren’t always impressive at the start of the run but over the last few weeks the performances have started to match the results.

I don’t expect that the unbeaten run will continue indefinitely but these results will go a long way towards getting back into the top four.

Great 20 match run and the stats say we were on top in the match v United.

December is busy but some easier matches until Liverpool so hope we keep it going.

Isn’t it great to have a 350.000 pound player that is able to shine against teams that are fighting relegation. Well, at least at home. Maybe. I’m so grateful!

The photo shows Torreira being the only one reacting to the ball. I like him better by the minute.

a little statistic: we have 34 goals this season in premier league, but our expected goals amount is 22. that means we scored 12 more goals than we should have. we have the biggest gap in the prem in that regard – the second team with the most positive goals vs xg are brighton with 3 goals more than their expected goals.

we’re playing well, putting lots of effort, and the team is finding its shape. but we have been quite lucky so far, so let’s hope it doesn’t catch up with us later in the season…

Not necessarily luck. We have two exceptional strikers . Expected goals is based on all shots by all players.

Hey Scott could you compare your total points prediction + the one from the bookies to the other “top 6” teams, please? If not in the comments here then maybe in your next post?
Cheers!

would like to see a detailed stat analysis on Giendozi….cant understand the hype

Where you even watching?

I know we need to be cautious etc with Guendouzi but for a 19 year old he is really fucking good.

November is over without even being mentioned 😀

Maybe with Emery at the helm, we can finally get over those winter blahs we used to suffer over and over and ……..

Thanks for the analysis. Typos on Gendouzi stats I think. Too many first halfs