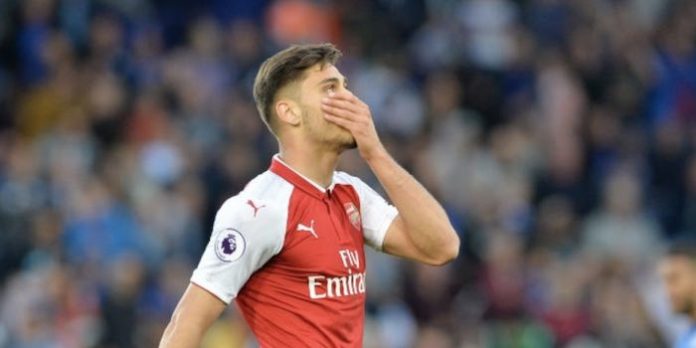 With defensive issues to the fore, Arsenal have been boosted by the return to training of Dinos Mavropanos.

The Greek central defender has been sidelined since the summer with a groin problem that has taken longer than expected to clear up, but was involved with the senior squad today as they prepared for the trip to Anfield tomorrow evening.

Obviously he’s still some way from playing again, and will need some U23 games to build up his match fitness, but with Rob Holding out for the rest of the season thanks to a cruciate knee injury he will add some depth to the defensive ranks.

The 20 year old, unearthed by Sven Mislintat’s diamond eye, signed last January from PAS Giannina and was expected to immediately go out on loan. However, he impressed Arsene Wenger sufficiently, and played three games towards the end of the season.

He was good in two, but sent off early in one as his inexperience at this level was exposed, and in truth there’s a lot more hope than expectation around him at this point. He’s still very young for a centre-half, and he’s unlikely to come in and have a significant impact at this point in his career.

That doesn’t mean he couldn’t be a useful option this season and still be one for the future, but many will still be hoping that the club invest in the kind of defender that can improve things straight away when the January transfer window opens.

A better defender won’t make us a better team defensively if the whole team doesn’t have a defensive system to put such a player in. We can’t expect a great defender to alter our whole style of play if Toreirra, who is such an amazing player at 22, has done so much and yet we still concede. The player’s individual qualities can only be deemed vital or dispensable if they fail to function within the team’s system. We still don’t know what kind of team we are. All the top sides in Europe have a distinct identity, but we still… Read more »

SNORE So tired of this. So I’ll make it quick; 1. The premise that Emery needs to have a “philosophy” is bogus. He has principles and that is evident; based on energy, hard work, organisation and playing from the back. He isn’t wielded to one specific style but uses fundamental principles. Isn’t that what we wanted when Wenger left? Someone who was tactically flexible? Yet 6 or so months in, people are crying for a style already. We’ve seen his princilples especially when playing the top 6, but hasn’t manifested itself regularly against lesser opposition. That’s no different to Pep,… Read more »

I didn’t cry for a manager who is tactically flexible as you say. I am entitled to wanting a manager who has a particular system and philosophy. I started supporting Arsenal because of the style of play, I went through all the barren years without complaining about how tactically inflexible we were. I just wanted us to get better players. Now we have them and we start being conservative, not utilising their abilities to the fullest, and playing plainly boring football.

So aren’t I entitled to rant about the direction I feel the team is going in?

Actually mate – I think you’re not entitled to rant. You started supporting Arsenal because of the style of play. In that case support Man City now then? I bet you could and you’d enjoy your football a lot more… plenty of people out there who just enjoy the game without club affiliations… Being a supporter means ‘support’ of the club. Not a style of play… anyway…

If we are so boring, how come we have scored the 3rd highest goals(?) In PL. I have lot’s of respect for Arsene but face it, Arsene knew that they were going to let him go so he sold all the wingers on the sly imo, we don’t have any genuine wingers atm apart from Iwobi as a result. Before leaving Arsene said just adding 2 players would help us challenge for title- no disrespect but we had just finished 6th close to 7th placed Burnley than 5th placed Chelsea. Now with ‘5’ additional signings Emery is struggling as our… Read more »

This! On so many levels this. Please don’t bring the toxicity and negativity back into our club. Foster a spirit of support and allow things to develop before you back them down prematurely. If I’m honest with myself, Unai is exactly the kind of manager I’d hoped would take the reins after Arsene for exactly the reasons mentioned by Faisal. All managers, irrespective, of their pedigree have had to adjust and mould the teams they inherited in the Premier League. The exceptions are those managers who inherited a pretty complete team, had boatloads of transfer cash or came in with… Read more »

At this point, I’m happy for the extra body in there. We haven’t seen Mavraponos under Emery yet and he was already a 7/10 under Wenger. His return means we don’t have to find a direct replacement for Rob Holding. Instead, we can focus on a mid-20’s, experienced, permanent solution in January. Then we can get an additional CB in Summer, along with a CM and Winger.

What a weirdly written article.
I mean, not hyping him up and expecting him to be our saviour is fair and wise, but all this use of “many” and quick to point out his mistakes as a way of projecting unto us the demand to buy a CB rather than hope in Mavros.
Just call it as you want; you want us to buy CBs, which is fine. Just weird to use us as the justification and an almost extra point to downplay Young dinos to do so doesn’t necessarily help him.

amazing how you got all that out of this article. i never read anything that is not true in the article. it basically says that mavros might be good but might not be. the truth is we dont have enough sample to suggest that he will everntually be a good defender let alone a great one. he had just three games where he performed commendably in two and got sent of in one. so even with the sample its a lit bit mixed. and right now “there’s a lot more hope than expectation around him at this point” . and… Read more »

Dino’s has speed, height and likes the ball at his feet. Is commanding in the penalty box and it’s really only a matter of game time and confidence which is going to be highly dependent on if we sign another road block to his development. Only reason he got sent off was because he was put in that position of desperation by the team not being great at defending which hasn’t changed much recently. His MOM performance against ManU shows he needs to be given a chance before he’s written off as too young to be useful now.

no. you should go back and watch again. he was trying to control the ball but just caught out due to the press and lost the ball. and he reacted by pulling the leicester player down. not controlling the ball properly and rash challenge led to the red card , none of which can be blamed on anyone else. as i said all the features are there , height weight character technique. but as an arsenal we should know better than anyone else, not every prospect no matter how good he looks in few games turn out to be world… Read more »

We all know this kid has a huge potential & I wish him all the best. I hope he can become a top quality defender over time & I’m more than happy to have him back in the squad. Now, saying that let’s hope Kroenke doesn’t get any ideas in his head that we don’t need any more defenders.

Don’t think we’re gonna see any new central defenders in January when we have Sokratis, Mustafi, Koscielney, Leitchsteiner, Monreal, and Mavraponos who can see us out until the summer. I doubt Koscielney and Leitchsteiner will be here in 6 months so expect new faces in the summer.

Nice .We need all the help we can get atm.

Unai Emery must use Carl Jenkinson as RB and not AMN. we gonna win the match with Liverpool

Robs in trouble. This boy is good

Am I the only who remembers we’ve got Calum Chambers?

Chambers is not been used as a CB at Fulham for now but rather as a DM… So that loan is a waste for to me..

no. its two you and calum chambers himself

Looks like Calum is more of a shop
window type loan than player development
but that’s just my guess.
Started a few games as DM now Ranieri
is in charge, if he grows into the role
then maybe he could return and be a
squad player but tough to see more
than that for him. He’s an honest player
and best of luck to him really.

Honestly, the red card was about an inexperienced referee overreacting—out of context—to a pretty benign situation. In the 17th minute of the match, with Leicester already in the lead, 40 yards from goal, and with nothing violent about the challenge whatsoever, I was as shocked as Dinos to see anything other than yellow for a professional foul there. And yet it’s mentioned over and over again like the Greek had some moment of madness that should forever change the way he’s viewed. I thought he had 2 promising outings followed by this one that was cut unnecessarily short and was… Read more »

Those of us that have watched all his minutes in youth games as well know that there is something special about him as a defender. Wenger seemed to not really know why he was signed in the first place, planned to ship him out on loan, and his performances changed his mind and rightly earmarked him for the first team.

Its been such a huge shame that he got injured in pre season as we have needed him so badly, and a pairing with Papas would be so good having them with a Greek unspoken connection.

Conveniently timed for the start of the transfer window.

He will be great for us as soon as possible he get into the team. He will replace Rob Holding at least until summer. Then there onwards it’ll be different scenario, new signings, new team. Both Holding and Mavropanos will be key for us next season. Both these players have different strengths, will give different dimensions to the game. Mavroponas has good aerial abilities and Holding has good aggression. And both are young as well, we have to motivate and give them more chances to become more solid defenders. Defenders In: Rob Holding, Sokratis, Mavroponas, Bellerin, Monreal, Kolasinac, plus 1… Read more »

I hope he can step up and make a claim for a spot in the team. Holding did it so why wouldn’t this kid be able to?
Also, is it coincidence we gone full wobble since Holding has been out? I thought he was doing really really well

Let’s see what this guy’s got as we move forward. No more Xhaka back there at least, ffs.

It would be nice if we didn’t have buy an entirely new back-line!