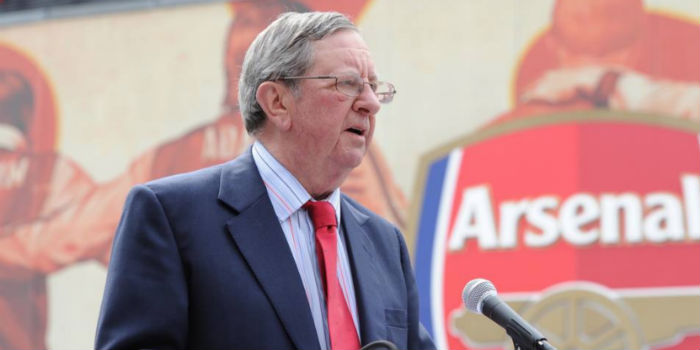 During his time at the helm, the Gunners enjoyed huge on-field success under managers George Graham and Arsene Wenger and successfully completed a move from Highbury to the Emirates Stadium.

He first joined the board in 1962 and served continuously until ill health forced him to step down.

As Gooners come, they don’t get bigger than Peter, who famously remarked at full-time of our 2-0 win over Liverpool at Anfield in May, 1989: “Never in doubt.”

Our thoughts are with Peter’s family and friends at this time.

The club has released the following statement.

Hill-Wood: Wenger’s not done yet

Hill-Wood: Our aim is to win trophies

Synonymous with the club. Hard to remember he’s not still the chairman.

R.I.P sir and thanks for the trophies.

“We made a promise to our new manager we wouldn’t announce it yet”.

“Who did you promise that too?”

RIP sir. And thanks to you and your family for the work you have put into our wonderful club. (And thanks for your interest in our affairs!)

Did this really happen?
I can’t find it anywhere

But Hill-Wood, who sold his shares to majority owner Stan Kroenke, rejected the claims as ‘complete and utter rubbish.’

He told The Guardian: “It was nice to make that money, but I was never involved in Arsenal for that reason.

RIP Mr. Hill-Wood, the greatest Gooner of them all!

Arsenal is literally in his blood. RIP.

If only the Hill-woods were still in ownership of our club. RIP Peter thank you for your and your family’s stewardship and service to our club.

RIP hill wood.. You would always be loved… I pray your spirit continue to bless our club as we continue to strive to be the best out there… God bless Arsenal

Hard to believe none of these guys aren’t at the club no more!! R I P

Definitely the end of an era…

He sold us to the American. and he mentioned he made a tidy sum from selling the shares.

Did we get any benefits??

Not the time pal

I think people like yourself don’t remember the situation that existed that caused the club to be sold to Kroenke. Thanks to our previous successes and our brand of football at the time, we had many vultures circling as they saw the debt we had amassed due to the new stadium as both a weakness but also as a sure sign that the club could leverage substantial amounts of money. Kroenke was the best of a very bad bunch that were interested in our club. Peter Hill-Wood and the board were under no illusions that the club had to move… Read more »

‘NPCs’? Come on mate, you’re better than that.

No,I meant NPCs. You see this all over the place in other teams where one week they love the club and the following week their agent is kicking of transfer speculation with the old line “it would be an honour to play for (insert major European team here)”.

we werent really that vulnerable. These investors that came in did not help to clear our debts a single cent dude. it is people like you and me who religiously pay for match tickets and jerseys that helped put money into the club the American merely put money into hill wood’s hands, nina, fizsman et al. none into AFC. I hate these people who had the history and stewardship over us to sell out on us. we are rich because of the explosion of global TV revenue, thanks to scudamore and skysports and willing suckers like me to pay the… Read more »

Fiszman sold his shares from his death bed, he couldn’t exactly keep them could he

Thank you…brought a tear to my eye.

Gave his life to the Arsenal a legend in my eyes.

Thank you for your stewardship of a club whose story has engrossed so many over the years. Rest In Peace.

RIP to a great servant to the club. Hope he and Danny Fiszman are enjoying a pint up there.

A bottle of Bollinger or a fine claret are more likely, but agree with sentiments.

Extremely sincere guy. Wore his heart on his sleeve – apologies for the cliché – however, us Arsenal fans do. Why it hurts when we play crap. I cop grief wearing my 89 strip to the bus stop and then need to remind ignorant supporters, primarily Liverfool tossers, who give me “You’re living in the past.” Well May, 89′ you probably weren’t even born, however, the benefit of the doubt, here – when did you last win the title? Moreover, may I bring up 2004? Quick reply – “We are still undefeated, you Gooner c*$t!” Indeed. Let’s see after the… Read more »

Thank you for concerning yourself in our affairs.

Unfortunately, that statement soured my respect for the man.
RIP

I remember standing for a minute’s silence at Highbury the day after his dad, Dennis Hill Wood, died.
It was against Liverpool. They were top of league. We had no chance. Ian Rush scored early (his 68th that season) but we weathered the storm and Alan, Alan Sunderland’s qualiser earned us an unlikely draw.
Let’s hope history repeats itself.

Was anyone here present the week Don Howe resigned? Or remembers the protests that week chanting “Hill-Wood out” and “Stick Venables up your arse”??