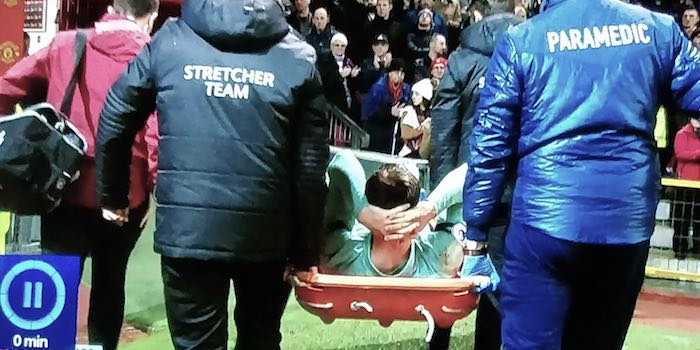 Although Unai Emery wasn’t specific with regards the extent of the injury sustained by Rob Holding in his press conference today, it’s being reported that the club fear the defender may have suffered a cruciate ligament injury.

The 22 year old went down during the first half under a challenge from Marcus Rashford in the 2-2 draw at Old Trafford, and was stretchered off after some lengthy treatment on the sideline.

Last night the Arsenal boss described it as a ‘big’ knee injury and today provided a further update without going into too many specifics.

“At the moment, the first news is not good,” he said.

“The doctors are looking at him and they are going to communicate with us.”

The England U21 international is due for more tests in the next 48 hours, but it does look as if this may well be a season ending injury, which is a real shame.

The timeliness of Laurent Koscielny’s comeback is very welcome then, with Emery suggesting the captain could be in the squad for this weekend’s clash with Huddersfield at the Emirates.

“He played 85 minutes on Tuesday and our plan is that he can maybe be with us in the 18 on Saturday,” said the Spaniard.

“Maybe he can play against Qarabag in the Europa League. He’s working with us with very big performances every day in training. He’s playing for the under-23s with a good feeling. The next step is for him to be with us.

“He gives us experience, quality, personality. We need every player and we need also for him to train with us.

“The next step is playing. He can play with us and be with us normally.”

Seemed likely it is serious, let’s hope it is a mild version.

And that Kos steps back in very soon.

Good luck to both of them.

So unlucky hes been great this season, thank god koss is nearing full fitness, we still have sokk..mustafi… Mavor… Kos…

A serious shame for Holding (and Arsenal, of course) given his progress this season. When is Mavropanos due back again? He looked great initially, and if the other Sven additions are anything to go by, will continue to surprise us.

According to the official site, he’ll be back in full training at some point this month.

Damn.. It came from such a nothing incident… Gutted for Rob.. I hope he heals up and comes back stronger..

Leno me, I’ll be your friend
Reply to  Abhi

I actually think on closer look it was a nastier challenge than first deemed. United had just scored and were desperate not to let Arsenal regain momentum, Rashford sees Holding looking for a forward ball to release and tries to collide the full length of his body against Holding’s as soon as his balance is nearing one foot. Rashford knew it’d wipe him out/wind him, though possibly not intended to injure. But this was Mourinho’s filthy plan. He sent on several expendables at the start to keep hitting these sly challenges on our players. He was basically trying to force… Read more »

Reading that back makes me sound like a conspiracy nut… I promise you I’m not a ‘flat-earther’!

As he went down, I genuinely thought that Rashford swung a second leg at him.
Nasty cynical UTD………in the dna.
Rob is a bigger loss than most, cause he’s class on the ball, as well as being a good defender.

Yes. A flipping shame. Believe this was his break out season with the club. Hoping for the best.

Can we recall Chambers? Failing that, it’s time for inanimate carbon rod.

That might honestly be the best option Chambers or ICR are the most dependable ready to slot in choices for this weekend onwards.

However, I wouldn’t be surprised if Unai keeps this going at least until Christmas break before acting. I have a feeling he might see how Koscielny might pan out and go for Licht/Jenko in the mean time. I have a feeling he’ll stick to 3 at the back if he can.

First Welbeck, now Holding. We really should consider getting reinforcements in the January transfer window on the relatively decent start to the season. Considering this greatly damages our depth, we will need them to continue pushing for the top 4.

transfer window to continue our relatively**

Not sure what happened there.

Agreed. If he is out for a while it would make sense to buy a CB. The age of Kos and Sok and Mustafi being a bit shit means that we probably needed a CB in the summer anyway.

Well said. Sokratise is not a kind of player that Arsenal should keep long with his intercepted passes. Kosclieny is older but he he’s good then any of the two, Mustafi n Sokratise.

what make matters more complicated is the fact that emery is not even putting ozil in the squad. thats good in the long term, but right now it is stretching the already thin squad we have right now. we have just three players to play in attacking midfield position and we are rotating them every game. if atleast one of them is injured i think it would put us in a difficult position particularly as it is festive season. even if they are not injured, constant playing will tire them eventually. Unless some young players like maitland niles or smith… Read more »

I’m really surprised by the outcome, as bad as the knock seemed at the time, holding must have a great pain threshold as he didn’t look too pained compared to some coming out of challenges like that.

Regardless the season is long, I hope he comes back and plays a blinder in the EL final.

Use this set back to comeback stronger Rob, both mentality and physically, if you do you will become a world beater, all the right qualities are there

Watching the game I thought it was a acl injury right away (I’m a sports physio), however the fan in me was hoping it wasn’t. So sad if it is a full rupture he was looking so promising this season.

Honestly please feel free to speculate more often on our injures. It’s not the first time I’ve requested someone medically based give us some insight.
Kinda like have a ref in the studio during a match.

Absolutely gutted by this. Not least because he’s an incredible young player having a great season but also because our options at centre back are painfully thin now and limit our ability to mix up tactics (4 or 5 at the back) depending on the opponent. For me it’s an avoidable one as well. He’d played into trouble a couple of times already in the match by holding on to the ball slightly too long and either forcing evasive action or misplacing a pass as a result. That’s exactly what happened here as he walks into trouble as Rashford approaches… Read more »

You are blaming the victim. It was a really nasty challenge, purposefully hitting his knee at full speed without any attempt to avoid to the contact. I was very surprised it was not an yellow even before it turned out it’s an injury.

Really gutted for Holding. He’s been our most reliable centre back this season. I hope this doesn’t destabilize his development. With Kos on the comeback trail we can only hope he can perform to his maximum capability because I fear for our chances with only two other senior CBs, especially when one of them is Mustafi. I know we have Mavropanos too, also recovering, but he is too young to have to deal with that much responsibility in such a vital position where any mistakes can be easily punished. That said, what we saw of him last season was promising.

Whatever it is ..its not good.