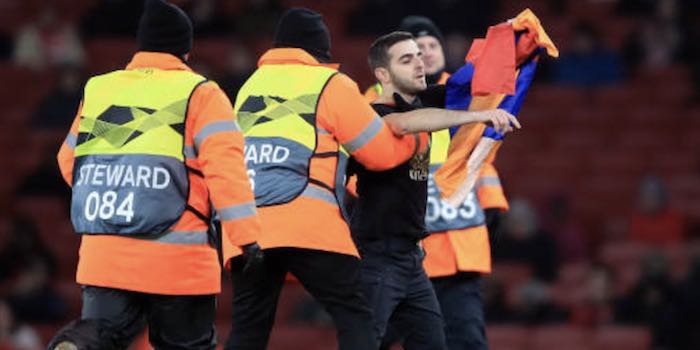 Due to a pitch invader late in the game against Qarabag on Thursday night, UEFA have opened disciplinary proceedings against Arsenal.

The case will be dealt with by the UEFA Control, Ethics and Disciplinary Body on 21 February 2019.

The pitch invader was carrying a flag relating to the ongoing conflict between Armenia and Azerbaijan and attempted to approach Henrikh Mkhitaryan before being stopped by stewards.

An Arsenal spokesperson said, “All of the safety procedures at Emirates Stadium are regularly reviewed, and in light of Thursday night’s incident, we will be assessing whether we can make our pitch incursion procedures even more robust.

“It is extremely rare for anyone to get on the pitch at Emirates Stadium, as attempts are usually stopped by our many trained stewards on the track.”

The likely punishment is a fine of some kind.

Shame, it was the most exciting part of the match

The Armenia-Azerbaijan situation is really tough. Soldiers are still being killed every couple of weeks along the Frontline and they still bombard each others border villages with artillery strikes.. Not pleasant at all.

Still.. Good to keep politics away from football unless its necessary (like with the current discussion about racism and homophobia in the game).

A Different George
Reply to  Tim

I had no problem with the Pussy Riot “pitch invasion” in the World Cup final. Made an important and relevant political point–“you’re holding this event in a country that is locking up people for their opinions.”

Shame arsenal can’t then forward the fine to the idiot who decided to invade the pitch – it would certainly make people think twice about it!!

Wasn’t it Qarabag’s supporter and shouldn’t they be paying the fine?

It’s our job to make sure no pitch invasions happen, which we didn’t do.

Right then, no seats for their support next time they’re here, job done.

Qarabag should have to pay the fine; it was one of their idiot fans who invaded.

Disgraceful that UEFA would fine us for some geezer with a flag but turn a blind eye to the Azeri team failing to provide a secure environment for players of any nationality. Pathetic

What should UEFA do about the latter problem? Genuinely asking.

Request that their home games be held elsewhere on neutral ground, and certainly not allow them to host major finals.

Play on neutral soil maybe? The stakes were not high, but what if we make the finals of the EL and then it’s an issue for our Armenian player to play in Baku?

Piss off UEFA, you wank-hammers.

It’s very difficult to prevent an individual
that determined without the kind of
draconian measures that no one wants. Hopefully, the dicks at UEFA will take that into account.

Uefa officials probably got all giddy when it happened, knowing full well they would be able to (legitimately, for once..!) Sanction us.

Yes, let’s sanction Arsenal, divert some attention away from how UEFA ease the way for PSG and Man City to financially dope their competitions, great idea….

I only saw one man Enter the field and he was quickly withdrawn. One of the qarabag players was furious about the situation- he had to be calmed down by a few players