I was pretty down on Arsenal after the West Ham match, that made my confidence going into this match against Chelsea pretty low. Before kickoff I was really hoping to avoid an embarrassment and a repeat of the Liverpool beat down.

I was pleasantly surprised with this result and the performance the team put in.

Arsenal 2-0 Chelsea: By the graphs 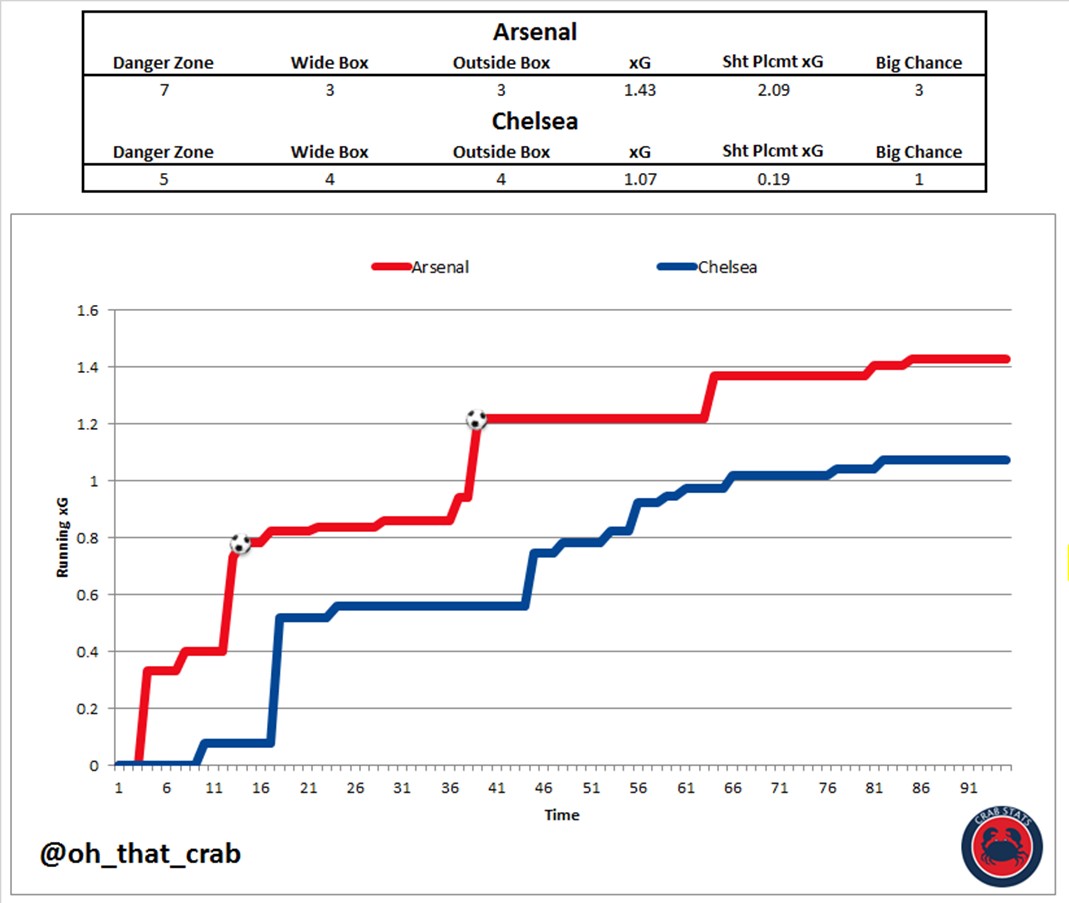 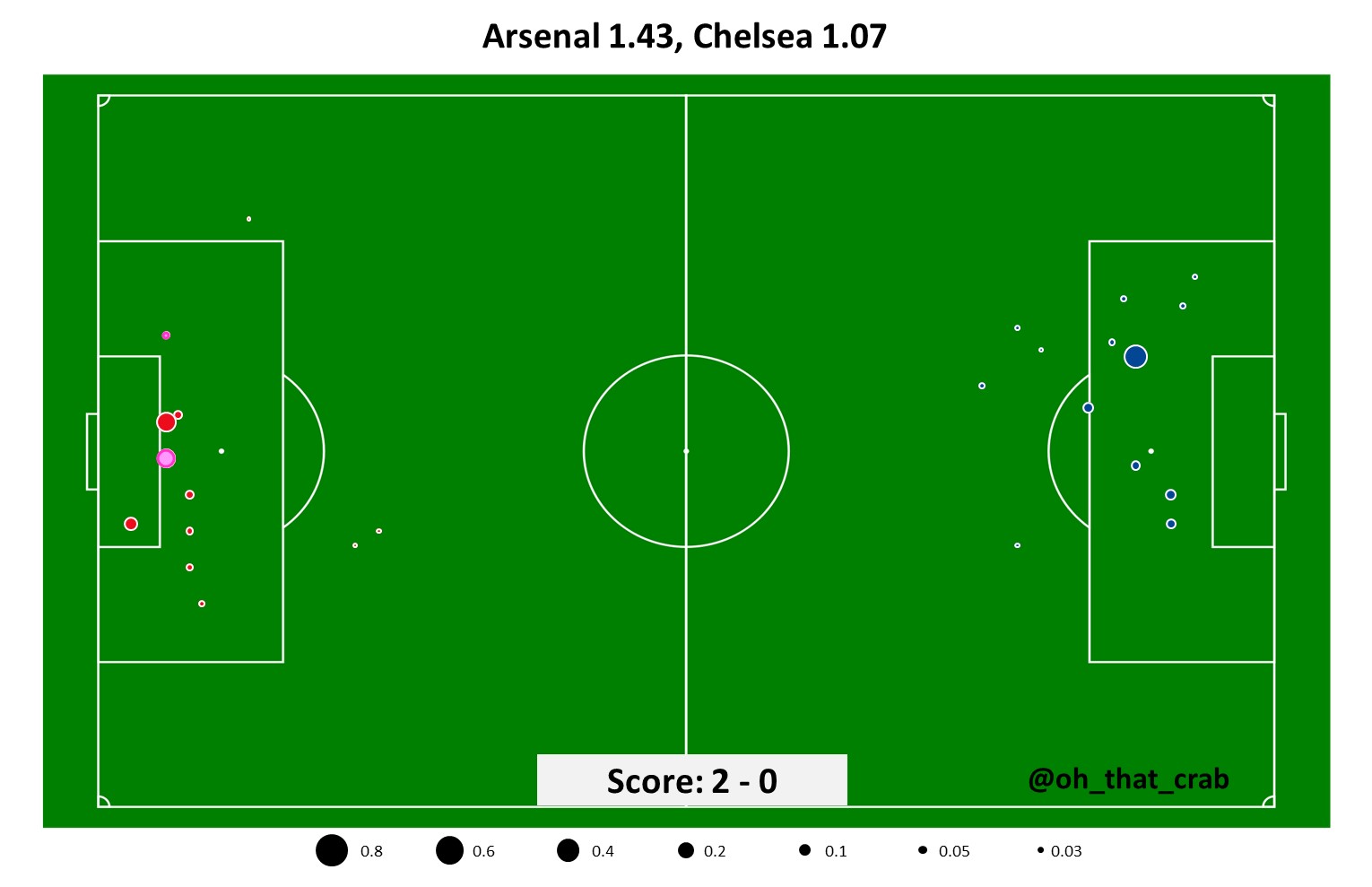 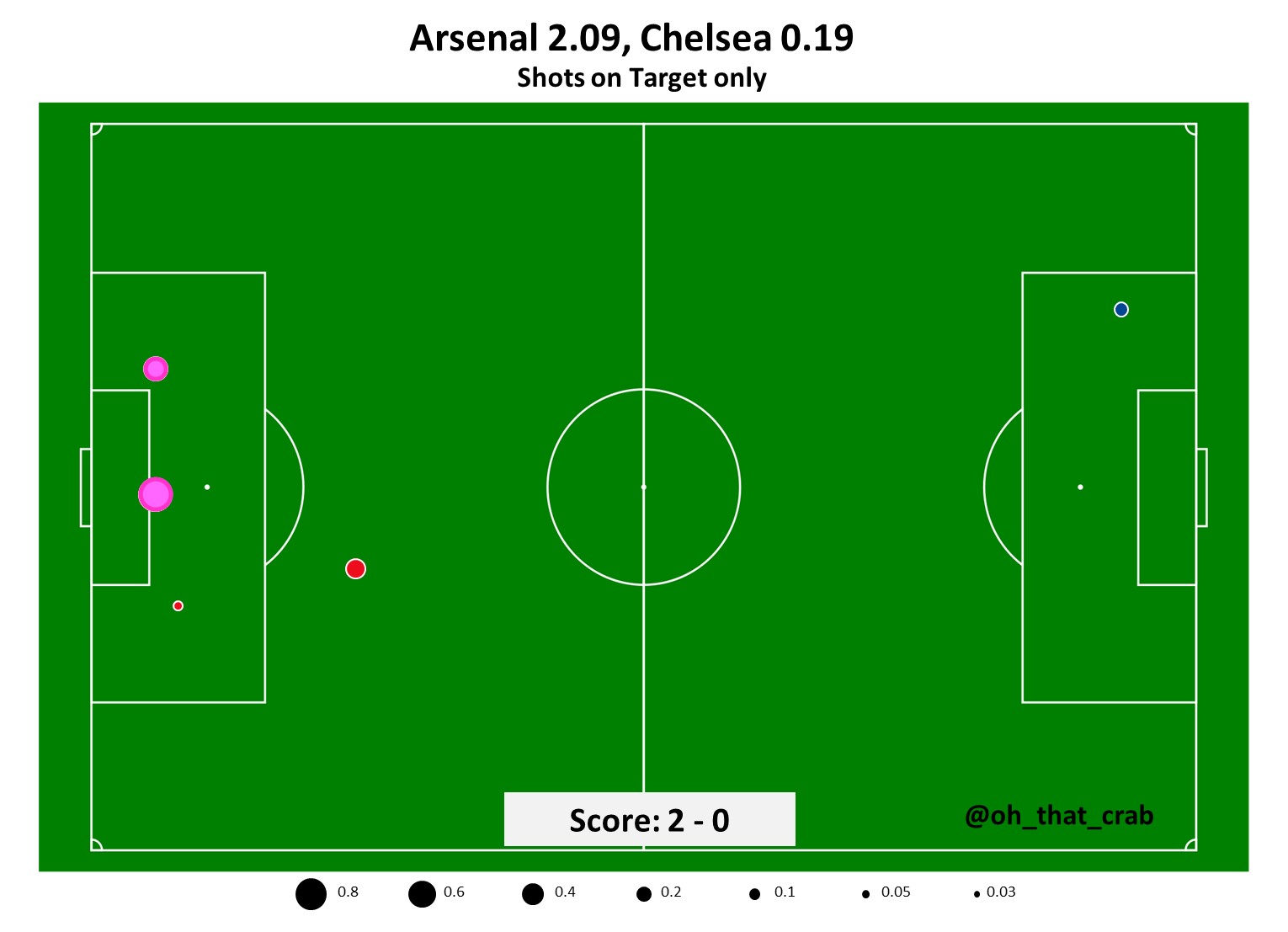 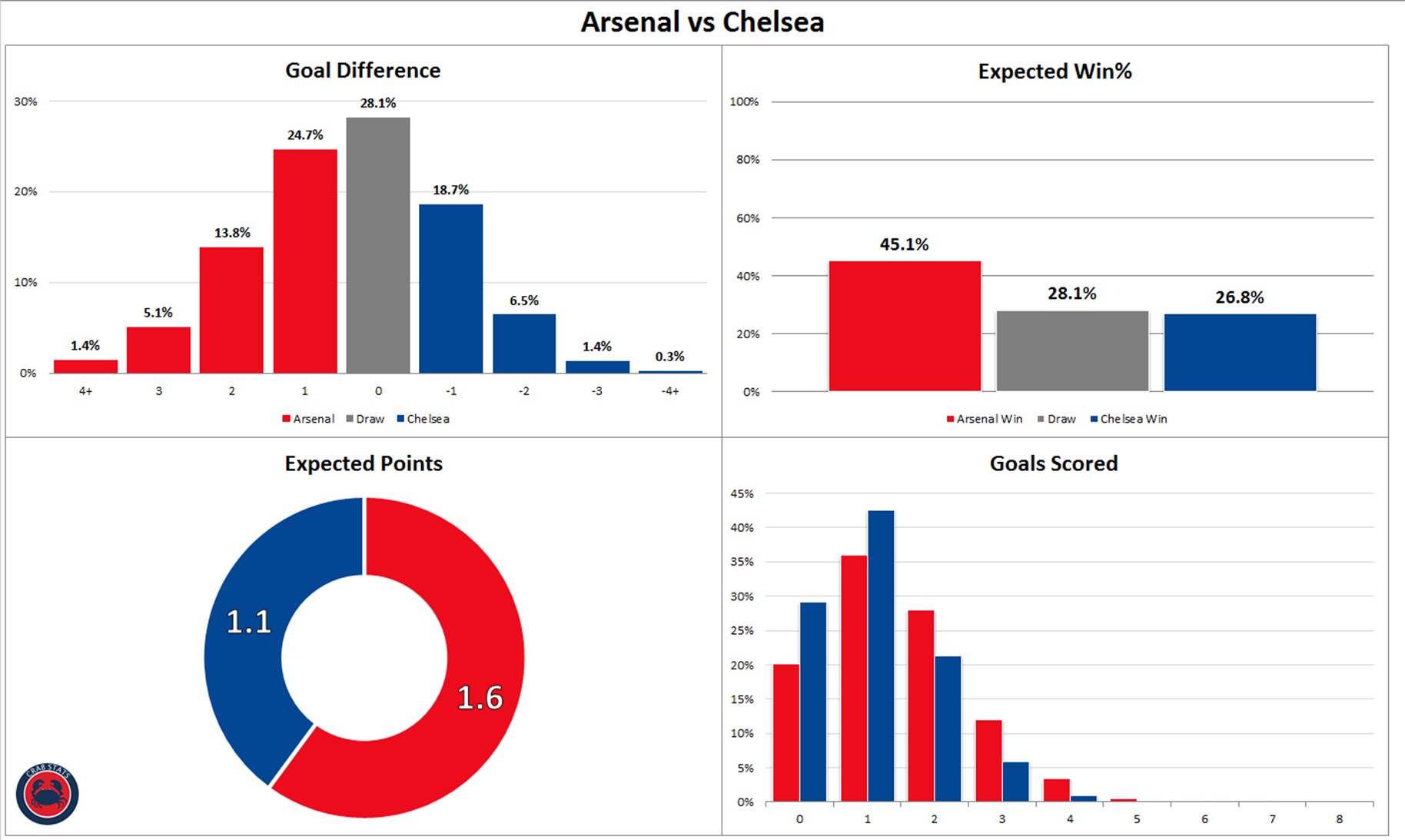 Arsenal 2-0 Chelsea: By the numbers

61 – Defensive Actions (tackles, interceptions, blocked passes and fouls) against Chelsea, the highest total for Arsenal this season and tied for 7th highest in the Premier League this season.

9 – Total tackles for Lucas Torreira in this match, leading all players.

13 – Clearances made by Laurent Koscielny in this match, leading all players.

39% – Chelsea’s pass completion on passes into the box, 26 completed of 66 attempted. For comparison Arsenal completed 55% of their 27 attempts.

43% – Chelsea’s percentage of their season average for shots classified as “Big Chances” in this match, (1 vs 2.3)

This was a very good defensive performance from Arsenal. The put up the highest defensive counting stats of the season and while Chelsea had a few moments of danger, the Arsenal defense was well in control of this match.

The thing that really stands out for me is how well Arsenal were able to blunt the Chelsea attack in the second half. Chelsea had nearly 70% of the ball, but were only able to manage 7 total shots, of which only 3 came from inside the box and only one from the central zones that I call the “Danger Zone.”

38 – Passes attempted, 3rd most on Arsenal

After suffering an injury that sidelined him for the Holiday schedule it was very nice to have Bellerin back in the team, if only to not have to see Stephan Lichtsteiner on a regular basis anymore.

This hasn’t been the greatest season from Bellerin but of all the players that Arsenal could afford to lose for a long time the difference between the starter and the back up is probably the largest gap in talent. 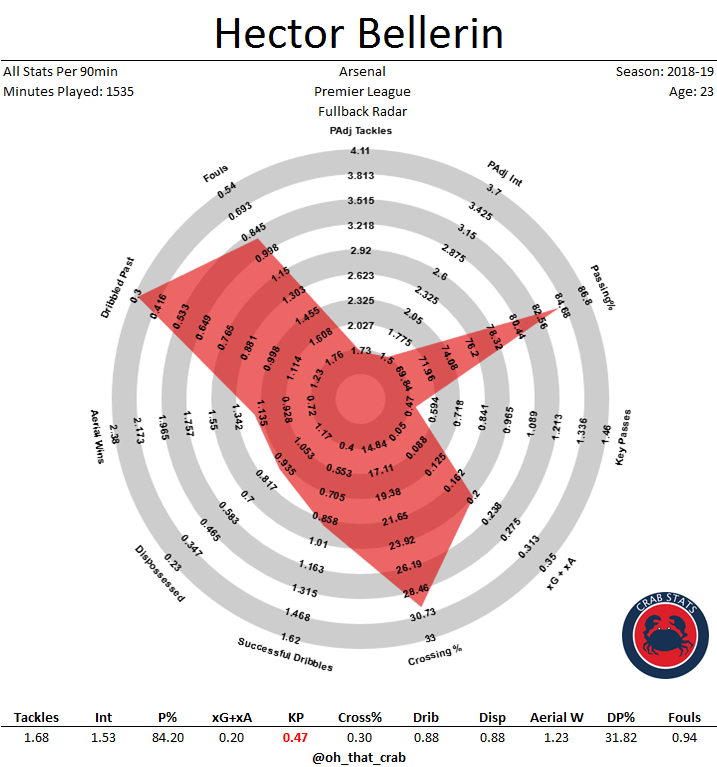 I was hopeful that as the season went on Bellerin would grow into his role because in Unai Emery’s system the fullbacks carry a large attacking role and I think that suited Bellerin’s skills. I hope that he heals as quick as possible and that he can come back even better after this injury. Ainsley Maitland-Niles, Lichtsteiner and Carl Jenkinson will have big shoes to fill.

Bring me more of these three man midfields

21 – Ball recoveries made the Arsenal three, led by 11 for Granit Xhaka.

5 – Fouls committed by Granit Xhaka in this match, leading all players. I actually didn’t mind these fouls as many of them were the cynical variety to break up Chelsea attacks. He also was able to escape without a booking which is even more impressive.

2 – Times dispossessed by the Arsenal three

11 – Times dispossessed by the Chelsea three

15 – Tackles for the Arsenal three

5 – Tackles by the Chelsea three

0.5 – xG Assisted by the Arsenal three

Going to a midfield three in front of a back four seems to produce much better results for Arsenal. The three players that Arsenal have seem to compliment each other well and in this match against one of the strongest midfields in all of football the trio more than held their own.

Bring me more of this and I will be a happy stats collector and soccer watcher.

Sources: Opta via whoscored, StatsZone and my own data base

Always a great read!
This info always enlughtens some part of the result; and yes the midfield three were amazing, but a big shoutout to our cb pairing. Sokratis and lolo showed big character and lots of experience to nullify the chelsea attack

Also, how many clear chances has auna missed so far… he has a very good tally, but could already be in the 20’s
That finish from laca though

247 – the number of times Pedro went to his arse without being touched. (Estimated)

I think at times emery is a bit too defensive tactically . And therein lies his greatest strength and weakness as well. It will work against most of the top five sides because we are right now the underdogs, and top teams are more likely to take the game to arsenal and attack us every time we meet. And emery being tactically good knows how to prepare the side defensively and win against them. But this will likely change against weaker teams and gradually against top five sides as arsenal becomes stronger against them.

And if suppose if the opposition team is good enough and manages to find a way through our defence then we will spectacularly fail. Because the nature of emerys plan is such that defence comes first, attack later. This is what happened to psg against barcelona in the second leg. With good lead in the first half emery just ceded posession and try to defend their lead instead of using the advantage and taking the game to them. And this gave barcelona a chance to come back, and come back they did.

I see your point and this is where flat track bullying cN really help. I prefer we be great against the rest of the league, as opposed to performing against the top sides and then failing when the weaker teams arrive. There are more weaker teams in the league, so if we are able to beat those, it would mean more points.

Performing against top sides has only yielded 8 points all season from a possible 21. But, we won and that’s 3 points in the bag. Its even better because it cam with a good perfomance.

Last season we got only 6 points within top 6

Not a hardcore Ramsey fan but I don’t have hesitation to admit that he really loves Arsenal. He was so happy when we scored. He is showing true professionalism and giving his best in every match even when we all know he will leave coming summer. Many players might not risk as injury might hamper their new deal. All the best to him.

What it means these stats?

I dont understand these..

What is numbers in bracket??

81% – Chelsea’s percentage of their season average for shots from the “Danger Zone” in this match, (5 vs 6)

Forget the stats, just look at the pretty pictures.

15.4 is Chelsea’s season average. They managed to get 14 shots against Arsenal. (The same goes for the second stat).

So in other words we battered them ?

Thanks Scott – always interesting and enlightening

I am a bit surprised that you were worried that Chelsea would embarrass us, like Liverpool. I like reading the statistics column, which gives me insights I did not see on my own, but you simply can’t ignore the most important statistical difference for us. We currently have the third-best record at home, behind Man City and Liverpool. We are eighth on the road, behind Watford and level with Wolves. I was worried that we would draw with Chelsea, or perhaps lose narrowly. I am not surprised at all that we beat them.

I am naturally pessimistic and expect the worst about the teams I follow. I find it makes defeat easier and wins feel better.