THE LOWDOWN
Arsenal prepare for the visit of Chelsea on Sunday in what is, arguably, their biggest match of the season so far. City’s slip up at Bristol last weekend has given the Gunners a 2 point lead at the top of the WSL with a game in hand. They will be keen to cement that advantage with victory over in form Chelsea.

A victory in this game would both maintain Arsenal’s advantage of the top, completely eliminate Chelsea from the title race and give the team a huge psychological boost. But that will be easier said than done. Chelsea are a very different beast to the team the Gunners dismantled 5-0 at Kingsmeadow back in October.

Emma Hayes’ side have won their last 10 games without conceding and haven’t lost since that chastening defeat to Arsenal. The Blues trail Arsenal by 5 points having played a game more, a victory puts them back in the title picture, defeat almost certainly takes them out. This is a very high stakes game.

Arsenal endured a draining win over Birmingham on Wednesday night in the Conti Cup, with late goals from Danielle van de Donk and Vivianne Miedema overturning a 1-0 deficit in the dying minutes. Chelsea meanwhile, were dishing out a comfortable 4-0 thrashing of Reading. With Jordan Nobbs still injured and Kim Little feeling her way back in still, you might argue that Chelsea are slight favourites.

Arsenal’s results have been sound, bar a 2-0 defeat at 2nd placed Manchester City last month, but they are not playing at the level they were prior to Jordan Nobbs’ injury. But if the Gunners can come through this, they can earn a precious psychological boost and they have a relatively winnable run of games until the visit to Birmingham in late March. Game on.

His side are two points clear at the top.

TEAM NEWS
Arsenal are still without Jordan Nobbs, Dan Carter, Jess Samuelsson, Tabea Kemme and Viki Schanderbeck. But Danish winger is available to make her WSL debut having played for 70 minutes in the Conti Cup on Wednesday evening. Emma Mitchell has completed her recuperation and is also in line to start.

Joe Montemurro endured a stressful few minutes on Wednesday when Vivianne Miedema appeared to turn an ankle and spent some time in visible discomfort. But she completed the game, scoring a stoppage time winner, and ought to be fit for this game. Montemurro has rotated his goalkeepers this season and must decide between Sari van Veenendaal and Pauline Peyraud Magnin, after van Veenendaal’s excellent penalty save on Wednesday.

We are a round behind on some of these, but I didn't want that to stop me from tweeting out some @FAWSL radars.

LAST TIME OUT
Arsenal thrashed Chelsea 5-0 at Kingsmeadow back in October with two goals each for Miedema and Nobbs and a Kim Little penalty. When the sides met at Meadow Park last season, the sides drew 1-1, with Beth Mead scoring a superb solo equaliser to rescue a point back in April.

PLAYER TO WATCH
Kim Little is still feeling her way back into full fitness after a broken leg in October, courtesy of an over-zealous challenge from Drew Spence in the reverse fixture. She has played all but 2 minutes in the last two matches and has clearly been slightly below her best in each. But with 178 minutes under her belt, she should be moving closer to full rhythm and Arsenal will need her to be at her best.

Back in October, her probing passes from midfield caused Chelsea’s defence all sorts of chaos and with Jordan Nobbs sidelined, Little’s role is very large. She will look to pick up pockets of space between the lines to try to feed Miedema and van de Donk, but just as important will be what she does in deeper positions. Arsenal need to control the game in midfield against the Blues’ counter attacking style and a fully firing Kim Little is one of the best players in the world for that job. 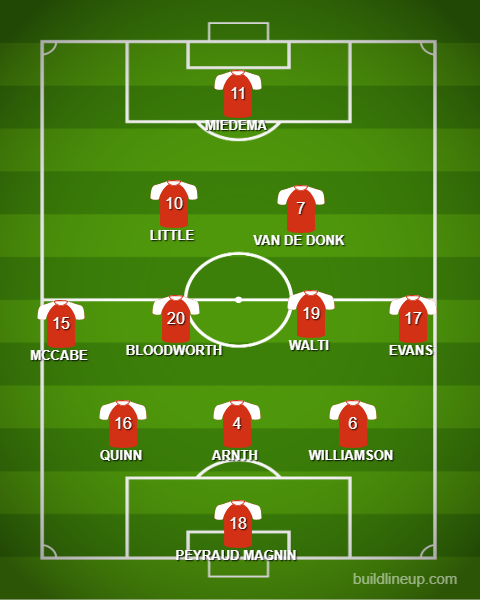 HOW TO CATCH THE GAME
The match will be screened live on BT Sport 1. (If you’re not in the UK, I am sure you will be able to find a stream!) The game kicks off at 1230pm. But if you can get to Meadow Park on Sunday, please do. This is a huge game between two excellent teams. It’s £10 adults and £5 concessions on the gate. I guarantee value for money and I know the players would love to see a big crowd cheering them on.

A *BIG* Sunday in store for #FAWSL, with key clashes at each end of the table…

COMING UP
We’ll have exclusive player reaction on the site on Sunday shortly after the game. Next week will see our January feature interview on the site too.

Big plus if Mitchell is fit. Yes, we have had to work hard, but we all thought Croatia would be knackered facing England in the WC semifinals, didn’t we? And the Birmingham game is better preparation for a match like this than a cakewalk, I reckon.
I thought we did well in this fixture last season – I remember Beth Mead was felled in the box and an absolutely stonewall penalty was not given.
I’m backing us to win by the odd goal.
Happily take a draw, of course!

I have only just seen the winner against Birmingham. That is a great piece of preditory finishing, but what a brilliantly weighed through ball by McCabe!
Despite the injuries I think we still have the quality to beat Chelsea.

Realistically speaking, a draw would suffice for us with a game in hand. But I would love if we can actually get a win here. Whether its grinding one out, off the back of a dubious decision or an absolute mauling. The injuries make it difficult but a win would be absolutely huge for us from a psychological point of view. Defeating one of the best teams in the country who are on an incredible winning run, who’ve gotten the better of us in recent seasons, while we are really stretched thin squad wise? There is more at stake here… Read more »

COYG… 3 POINTS ON SUNDAY. I WILL BE WATCHING