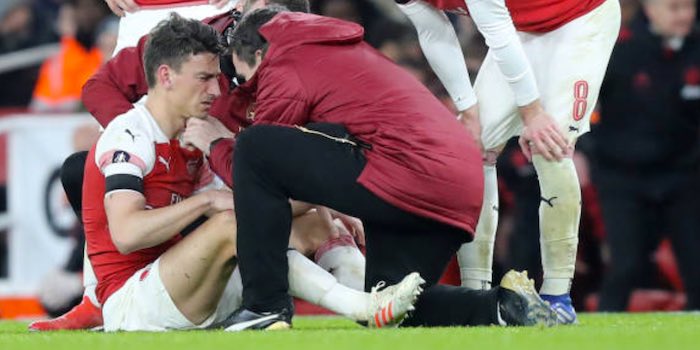 Unai Emery fears that Laurent Koscielny may have suffered a broken jaw in this evening’s 3-1 FA Cup defeat to Manchester United.

The Frenchman was caught by the trailing boot of Romelu Lukaku and required lengthy treatment on the pitch before being substituted.

Speaking afterwards, the Arsenal boss said, “I think Koscielny will go to the hospital”, with the initial diagnosis suggesting a break on top of the cut that was apparent as he lay stricken on the pitch.

It would be a huge blow for the player, who was just returned from a 7 month absence due to an Achilles injury, and for the team. Not least because fellow centre-half Sokratis was taken off midway through the first half with ankle problem, although Emery sounded more positive about that.

“I don’t think it’s a big injury for Sokratis,” he said, but we’ll have to wait and see what the tests show.

With Rob Holding and Hector Bellerin already sidelined, the last thing we need is another defensive injury, and if the worst is confirmed for Koscielny, it’s likely to rule him out for a considerable period of time.

Whether that means we’ll be forced into the market remains to be seen.

Trump is a total cunt

So is Phil Neville

Did you notice during the tv piece on how good Petr’s career has been following his announcement to retire, Phil Neville finishes the segment by saying that Cech “isn’t the player he once was”. What a guy

Trump and kroenke are cousins and they both are horrible idiots.

Yep the number of downvotes is quite depressing

Depressing how many people have downvoted this comment. If an actor starred in a movie as the POTUS, and acted the same way Trump’s acted for two years, every single person would walk out of the theater hating him and calling him a cunt.

Yes, I think we are only going to see more of the youngsters.

The club hierarchy wouldn’t pull their fingers out, much less the check book / internet password out.

Sigh…..if it wasn’t for bad luck, we’d have no luck at all

FFS Get well soon Kos. Hopefully this forces the club to spend some cash at centre half. We must have an emergency ‘do not break glass’ fund for 4 injured first team defenders surely! Less than 40% of ball against Chelsea More than 60% tonight. But two different outcomes. Just goes to show how important that first goal is. We played into their hands tactically after conceding. Definitely should have made more of attacks down the left, should have flashed the ball across goal more often. Frustrating. On Ozil, I’m an Ozil fan but Emery is not gonna build his… Read more »

Ozil was not to blame for anything bad tonight, but I think sometimes a reminder is always needed. Arsenal fans have a habit of doing this; elevating the status of an unavailable player as the answer to our needs, from Jeck and Diaby to now Ozil. Everytime he doesn’t play and we struggle, his status elevates to “Creative Messiah, parting of defences like the red sea” and how on the pitch he would create all the chances we need. Forgetting he’s also adept at not doing much if a defence is resolute.

Ozil is Ozil, nothing more, nothing less.

Were we talking about Özil here?

I was responding to a poster’s comment on the section of Ozil. Is that allowed, Topic Gestapo sir?

We’re not getting the luck at the moment. Least of all koz,. Get well soon guys. For sure, good days ahead for us.

I hope so my man

We are fast getting through defenders this season and it is very depressing to see Koscielny ruled out for a length of time at his age.

You have to say the problem at Arsenal is a coaching issue though. We continue to be niaive in committing so many players forward at 0-0. Nothing seems to have changed in that regard since Wenger.

We need to be asking serious questions of Steve Bould at this point. Could there not be a proven defensive coach who can coaching these fuckwits in a manner they could understand? I would like to believe there is and we need to be looking into that appointment.

No amount of money can fix our luck. We need a voodoo priest. Something is wrong at Arsenal. ?

What is it with us losing important players just before or during a big match? So frustrating.

a voodoo priest and an exorcist

I’m no doctor but how could it not be broken? The force of it was horrible to watch.

Scum it’s, I absolutely HATE that team!!! We lose holding in a match against that dross and now Kos!!! Why don’t they just get a gun a shoot players? They’d probably get away with it that BLEEPS!!!!

Fortune smiles on us again

Yeah, peachy, it’s all fine. We won’t sign any one, you know, coz 6th place is not worth the effort.
Newsflash: In case you all haven’t noticed, 6th place is the club’s target this season. I have no shred of doubt of about that.
But they have to announce it’s the 4th place. The want to fill the stadium and sell merchandise after all.

As someone who went through the pain of a badly broken jaw a year ago, it majorly sucks. Was out of action from work and pretty much everything else for 8-10 weeks due to the pain and healing process; and then there’s the whole eating through a straw thing during that period as well… Hopefully it’s not a bad break and he’s not out that long

I’m so sorry for Lolo, and I’m so sick of the way we send teams out unable to cope with manure’s predictable and frankly (because i’m bored of our inability to cope with pressing/counter-attacking tactics) boring attack. Smarten up. How many years will we suffer it? I know we’re fresh out of Wenger and Emery needs time, but this manner of defeat HURTS.

I agree. In addition to that why have we lost the art of counter attacking? Too many passes going sideways and backwards. Also too many players afraid of using their weaker foot and thus slowing things down while they take an extra touch.

Agreed on the extra touches, it’s killing us.

Hope he is OK.

Very nasty injury, didn’t look like there was malice in it as Lukaku was trying to balance himself but the weight of the bloke on your jaw, was surprised Koscielny stood up even.

What are the odds Arsenal loses two Cbacks in one match?

Can’t he play with the Dark Vador face armor that we see from time to time ?

As soon as I saw that Koscielny had to cover on Lukaku for Kolasinac, I knew he would get injured. I mean look at the monster !

I feel tactics weren’t on point today ; had poor shape in attack and cutbacks weren’t doing any great. We need to penetrate more areas of the pitch than the left flank.

Yes, Ole didn’t have to be a genius to figure out what to defend from us.

This might be slightly simplified, but Ramsey tracks from back right to forward left, Kolasinac overlaps to the end line, Iwobi carries up the sideline then a 45 degree angle into the box corner, off the ball Laca follows the line straight at center goal or near (usually left) post. Auba mixes it up a bit more in both arrival timing and position, which might explain how he gets open and scores more.

I thought Lukaku had ripped his ear lobe off at first.