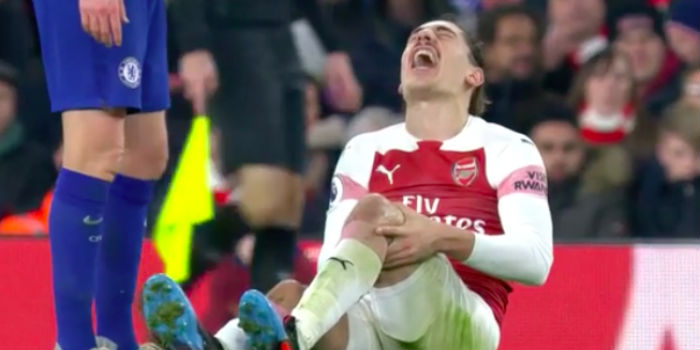 Hector Bellerin will spend up to nine months out after Arsenal confirmed the Spaniard has ruptured the anterior cruciate ligament of his left knee.

The right-back, who had only just returned from a calf problem, went down in agony during the second half of Saturday’s 2-0 win over Chelsea and immediately required medical attention. He was stretchered off leading Unai Emery to admit he feared a ‘big’ injury.

He was right to fear the worst. A statement from the club says:

“Further to the injury sustained during our match against Chelsea on Saturday, we can confirm that Hector has ruptured the anterior cruciate ligament of his left knee.

“Hector will undergo surgery to repair this in the coming days. The rehabilitation process is expected to take between six to nine months and therefore rules Hector out of action for the remainder of this season.

“Everyone at the club will now be working as hard as we can to ensure Hector is back on the pitch as soon as possible next season.”

It’s the club’s third big injury of the season. Rob Holding also ruptured his ACL at Manchester United while Danny Welbeck broke his ankle in our home game with Sporting Lisbon.

We’re devastated for Hector and wish him all the best with his recovery.

True dat. If not brilliant, he was having a very good season.

I’m truly upset, he’s my fav player in the squad and one of the few who has a strong identification with the club.

You know it could get even spudier if this makes him lose a bit of his pace. I think he already lost some of that Flash-like speed from an injury during Wenger’s management. I hope that’s not the case though

Get well soon Hector, and come back stronger!!

He’s got a way to go to get anywhere near seamans tache!

Let him grow his own pornstache

Hope Jenko gets a run in. Wish you speedy recovery flash

All the best wishes to Hector

Such shit luck we’ve had 2 cruciate ligament injuries in 1 season, both to young players. Get well soon 🙁

Davey
Reply to  Ya gooner

I’m 30 and I did mine in last year… Managed to come back to playing within 9 months or so.

I’m sure at his age and with the medical team Arsenal have he will be as good as new within around the same time frame.

You’re right it is bad luck, but better to happen when younger than older.

Do you play right back and are free up to June?

Probably can’t do any worse than the Lich tbh.
Davey in!

Really sad about this. Love Hector, not just as a player but as a person he seems like a good lad, and embodies the current conscious, forthright and active spirit of the younger generation. Hope he recovers well.

God, he will be missed.

Do the increased number of injuries have anything to do with our new playing style, which asks our players to run harder, faster and for longer.

I was wondering that. Also, is it down to different training methods too?

It could. Would take the bodies time to readjust. Perhaps this is why Managers like Carlo don’t push so much in training. His teams manage to keep a pretty healthy team through a season. Injuries to Ancelotti’s teams are usually down to impact during matches. There was of course Alexandre Pato at Milan

Pained to right! The moment he clutched his quadrecep muscles my heart sunk. Oh well, I guess supporting either Litchstenier or AMN is the way to go now… COYG!!!

I thought he clutched his knee.

What strikes me: a real top club would search for a replacement immediateley. Lichtsteiner is out of contract at the end of the season, so we need a second right back anymay. Of course, it´s difficult in january. But you could at least try.

yes but we are a europa level club..

We need to stop using that as a blueprint for being able to get players in January. Aubameyang wanted to leave Dortmund.

Cannot agree. A real top club would have a legit academy and young players – and the all too sought after “depth.” Arsenal has that. Bellerin is one of the best right backs in england, possibly europe. He’ll get healthy and be back next season, and probably sooner than we all think. Why by a first class replacement? Do fans boys want shot of Bellerin…already writing off his career? That makes ZERO sense. There are times to be frustrated w/the club’s lack of investment and Stan (of the creepy mustache) Kroenke’s lack of investment. This situation with Bellerin is NOT… Read more »

Spot on Homer. We have Maitland Niles and his confidence is growing. Why not give him a spot and have Jenko as back up? If we need someone in midfield where AMN could feature, there is always Mo Elneny

Get well soon Hector! So gutted for him and for us! I’m no athlete or physio…is there something that could help prevent this type of injury from a prep, warm up, gym work point of view? Seems terrible luck to lose 2 in one season.

if there were, you’d have to assume every professional team and athlete would be doing those measures. All the football and training that younger players put on their bodies from such an incredibly young age seems a likely factor, imho.

Off topic: nice, well put together read by Lewis Ambrose. Top marks.
Check it out.

I think at this point the A in ACL stands for Arsenal. Terrible news. Hopefully he can come up with even worse outfits during his time away.

I devastated for Hector, but the club must take some responsibility here I feel. Once again we have a young talented player who was played non-stop for three years (we are now in the third consecutive season where he is the only premier league quality right back at the club) and as we have seen with Wilshere and others, players need breaks. It’s a testament to Hector’s fitness and professionalism that he avoided significant injury as long as he did.

Real shame. He just came back into the squad.

AMN has been decent if he doesn’t get too adventurous going forward. He has plenty of strength and recovery pace.

BUT Hector is still ahead in terms of balance going forward and defensive awareness.

Hope AMN stays fit for rest of season and can build on the opportunity to improve further.

Beyond him, the prospects are scary with the over the hill Lichsteiner and the frankly piss poor Jenkinson whom we can’t even off load to Championship.

Waiting for the inevitable “Arsenal out for remainder of season” headline.