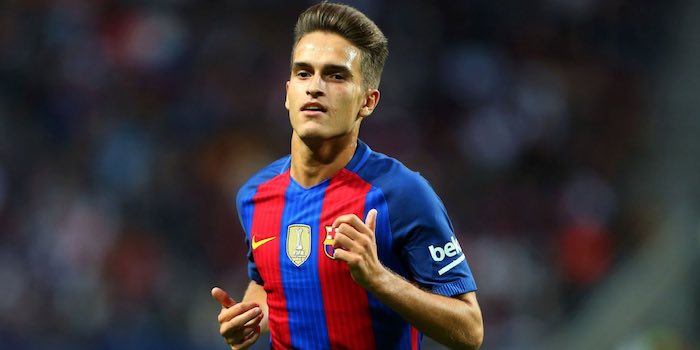 Unai Emery has reaffirmed that Arsenal are working to sign new players this month but, unsurprisingly, he was unwilling to talk specifics when quizzed in today’s press conference ahead of Friday’s FA Cup fourth round tie with Manchester United.

With a week to go until the transfer window closes, the Gunners are yet to get a deal over the line. Unlike last year when we heralded the arrival of Pierre-Emerick Aubameyang and Henrikh Mkhitaryan, the club has made it clear we’re only looking to recruit players on loan.

Barcelona’s Denis Suarez has been the subject of many back page headlines, although if you believe last night’s twist, that deal could be dead.

“The club continues to work on that,” said Emery when asked about the club’s ambitions on the transfer front.

“It’s difficult, you know, but I am working with our players and I think we need – and we can – sign some players to help after our injuries like Rob Holding, like Welbeck, like Hector Bellerin.

“But we can play with the players we have now and the same message is to you and every supporter, we only want to sign one or two players who can really help us with good performances.

“The club is working. They know our intentions, our possibilities for signing players that can help us, but they work and also with communication to us.”

Asked specifically about Suarez, he went on: “I don’t want to speak about each player. I know the club is working with different players.”

Whilst Emery stopped short of using the classic Wengerism “like a new signing”, the boss did suggest that Dinos Mavropanos, who got some minutes at the back end of last season, may feature in the coming games.

“The idea is firstly to find the quality and this quality can help us,” he said.

“We need, if he can come here, a winger for the right or left or some players also at centre back. But now, Dinos Mavropanos is coming back after his injuries and I think I can use him in the next matches.”

One rumoured late move was an apparent loan bid for out-of-favour Manchester United centre back Eric Bailly. This always seemed ambitious, as even though the Mourinho-Wenger feud no longer affects the two clubs, it’s unlikely United would simply loan us anyone, and it appears that Manchester United rejected the bid.

It’s possible that any potential January moves may be hampered by the recent announcement that head of recruitment Sven Mislintat will be leaving the club in February.

You know what it’s like when you’re set to leave your job, you basically just sit around eating biscuits, don’t you?

Mslintat and the transfer team has been poor toi average for some time now. As Wenger says, “everyone thinks he has the prettiest wife” We have not found solution for wide player for 3 seasons (Since Wenger was in charge) We had opportunity to properly address this last January when Mahrez wanted out at Leicester and preferred a move to London. Instead Mslintat sells Alexis to the one remaining bidder United laying us prey to Raiolla’s dictate and forcing us to take Mhkitaryan. We have also not sufficiently addressed Cback. Sure Sokratis has been decent coming in but he is… Read more »

How many more times are you going to regurgitate your views on Torreira?

Santori pretty much posts the same stuff over and over again. Nobody really knows why, he never engages in any discussion after posting his rants.. It’s getting quite annoying after a while.

Time to move on from that one.

He few seasons ago he was dropping his spunk for Flamini. FFS

Nobody reads your comments anymore because you insist on writing a fucking novel everytime where you re-hash over the same shit you have said a billion times before.

We get it, you like Mahrez. Time to move on.

Amen! He may not be offering a popular opinion with everyone, but the slating the guy is getting for being passionate and ardent about the club he loves (as I assume we all do) is childish and fairly idiotic IMO.

If you don’t like what he writes then simply don’t read it.

I almost wasted 15 minutes attempting to respond explaining that some of his points are incorrect. Sorry, Anders, but I appreciate the criticism of Santoris comment.

Considering how central full backs are to our play, that we sign a right back which brings in qualities of Bellerin.

This sounds to me like a confirmation that AMN will be the bellerin replacement.
Asking for a cb when we have 4 available, and 2 wide defenders able to cover seems to me like emery might look to go with a back 3 a fair few times for the rest of the season.

Also suggests to me that ramsey is staying until the summer.

He will want the option of a back 3. We cannot assume to use the same back 4 through the season as well since Koscielny will not be able to sustain through. Its just being realistic. 4 Cbacks is minimal. Considering Mavropanos is largely untested, we really only have 3 senior Cbacks in Mustafi, Koscielny and Sokratis. But Monreal can play tucked in as can Lichsteiner (albeit with much risk to us) So it is unlikely we will add at Cback. Fullbacks as I mentioned it beggars belief some people still say AMN has to play in his’Natural position” What… Read more »

As long as we keep Lichtsteiner as far from the pitch as possible I think we’ll manage.
We do need a backup for Hector in the summer though.
AMN really needs to take his chance now, his defense will hopefully improve quicker now that he’ll probably get to stick to one position for a while.

“You know what it’s like when you’re set to leave your job, you basically just sit around eating biscuits, don’t you?”

You know what it’s like when you’re set to leave your job, you basically just sit around eating biscuits, don’t you?

Sven has it even better, he will sit around and play Championship Manager

wouldn’t it be funny if he actually was sitting around playing championship manager, and he was really really bad at it? “this game is nothing like real life!!”

I don’t get this over arching concern for effing toothless FFP. Considering if we should let Ramsey off to Juve now, we free up 110 K per week, then if we sell Mhkitaryan (since we won’t likely find someone to take Ozil)we can add an additional 120K. Elneny (if we can flog him off) is another 55k. That’s 285K freed off the wage bill surely. Enough to bring in Suarez, Carassco and maybe even one other even. I don’t think the Transfer team know how to sell still. And that has got nothing to do with Wenger or Dick Law.… Read more »

Oh Santi taking on your own blogsite again. I’m afraid your first entry was too long to read, the others have at least been shorter.

At least you use paragraphs better than some.

He’s allowed his opinion, even if it results in numerous thumbs down!

Amen! He may not be offering a popular opinion with everyone, but the slating the guy is getting for being passionate and ardent about the club he loves (as I assume we all do) is childish and fairly idiotic IMO.

If you don’t like what he writes then simply don’t read it.

If our views are never challenged how are we to judge our own views as right?

“Accommodate Ozil’s defensive faults”, Santori? It isn’t going to happen – he has to change and play defense too. Can you remember the last time that Ozil tackled an opposing player? I can’t remember it happening since he arrived.

That’s why Emery never selects him for the squad. It’s up to Ozil to please the manager with his play. How he played before is irrelevant.

Our squad is crying out for an injection of real quality. We can get into the top 4 but this window is crucial for fixing our weaknesses.

ManU had an issue with their toxic manager and corrected it.

Chelsea didn’t have a player who could score and they’ve gone for Higuain.

We have a small squad that lacks defensive stability and midfield creativity – hopefully we’ll act. If we get these 2 decent signings, I think we’ll get top 4 and have a much better chance in Europe too.

A new signing will bring a much needed spark

That’s it. Arsenal are becoming a 2nd rate epl club not worthy
of the status of 6th richest team in the world fishing for scraps and
cast offs.
It s no doubt club is run on sound business principles but on the pitch
its performance aint impressive .
I don’t know perhaps a heavy beating by Mu will finally awaken the
US owner . I hope I am wrong .
However the rd are due a blip and why not. You cant be winning all the time.

we arent the 6th richest team in the world, its the value of the club, been highly valuable doesnt mean we have shit lot of money to spend the last 4 season we have wasted too much money on transfer buying player who have no sale value and very little value on the pitch. and lets not forget we have fuck up player contract getting nothing in return . ho yea contract (many below par player getting high wages) that the poison our club finance look at pool, they build a top team by selling their best player 3 year… Read more »

i dont know about you guys but it would be an absolute miss if we were to lose out on denis suarez. as a winger he is better than iwobi, and iwobi gets to start at arsenal. denis’ technique on the ball even surpasses ramsey’s. it’s beyond me how the club is still haggling over a €20m compulsory fee in the summer over denis. so say he comes n gets injured…our players get injured all the time and recover from it. lets be real, we have players who spend at least 1/3 of the season injured still on our payroll.… Read more »

Denis Suarez looks better than Iwobi in the following;

a – Better speed while dribbling the ball..
b – much better passer.
c – better field awareness, ie. passes without having to spend as much time looking around.

But not as strong a body, and not as good a tackler as Iwobi.

Good 10 minute highlight tape – he’s #6. But unable to assess his involvement over a 90 minute period.