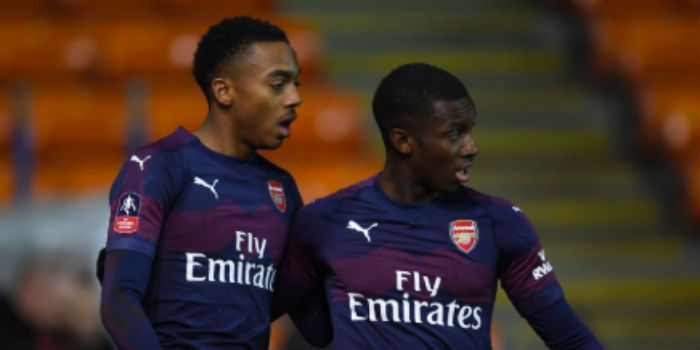 Unai Emery says he was proud of the way the younger members of his Arsenal squad played in the FA Cup third round victory over Blackpool.

A brace from 19-year-old midfielder Joe Willock eased the Gunners to a two-goal advantage at the break and Alex Iwobi rounded off a solid performance with a late third.

The win might have been even more comprehensive had Eddie Nketiah not missed a hat-trick of great chances in the first half.

Despite failing to find the back of the net, the boss was encouraged by the performance of the England under-21 international.

“I am very happy with Willock and also with Eddie,” he told his post-game press conference.

“Eddie had three good chances to score, but the most important is to create these chances. Willock scored and I think it’s good for them and for us.”

He added: “We need every player with the commitment. And with the preparation, when the team needs it, they can help us. The opportunity is coming in some matches like today for example.

“We mixed the experienced players in the squad and in the first 11 with some young players like Willock, like Eddie Nketiah and also Ainsley and I think it’s a good combination, because they can show us they are progressing with the team.

“The most important is with the passions, they work hard and be concentrated when they need to help again today.”

The late introduction of Bukayo Saka and Zech Medley meant that a total of four teenagers got game time at Bloomfield Road. Two more, Matteo Guendouzi and Emile Smith Rowe, were on the bench.

While the quartet who played have plenty of work to do if they are to convince the manager that they have a long-term future at the club, it certainly reflects well on the academy that so many youngsters are being given the responsibility of wearing the first team shirt.

Hopefully it doesn’t knock his confidence too much. Downside of being a fringe player is that it may be a while before he gets another chance. All being well in the in the same way that the highs of Norwich game didn’t carry, the disappointment of yesterday will fade.

We are not winning with large scores enough for Unai to remove Auba for the last 10 mn and put Eddie. There will also be the idea of helping Auba remain league leader in terms of goals meaning letting him play full time.

Nketiah will get goals. His movement is superb. Great dribbler too…he needs more chances. I was pissed that Emery subbed him. There was no need to get Lacazette on especially since we were winning.
Hope to see more of him

Lacazette is lacking goals and confidence. Our next game is a week from now. It’s good for him to get a run out.

I thought it was a little weird too. If you keep subbing him off to protect him in EPL games, why risk him in a tie we’re winning against weak opposition.

We were starting to lose control. Eddie was tiring. I thought it was the right decision.
I would have loved to see Saka get a few more minutes than he got. The kid barely got a touch in.

But I get it, he’s just 17 and he’ll get a few chances before he can go the Jeff way.

i think it was tactical. We weren’t keeping the ball in their half very well. I think Laca was brought on for his hold up play. Blackpool’s backline were all way way bigger than Nketiah.

We need to consider if the youngsters are really that good, without sentiment.
If the goal is to compete with the likes Liverpool & City, then we need them to be much better.
I must be alone when I say I’m underwhelmed by most of our youth. But it never hurts to be wishful..

Bitter truth. Our “successful” youth products in recent years – iwobi and bellerin – are a far cry from the days we produced Cole, fabregas, or even Tex.

Why do people mention Cesc as an academy graduate? What are you guys on?
He came from La Masia and straight into our first team, only playing a few games to begin with for the U23s for climatization. He joined the first team as soon as he arrived.

You want them to be new Messi and Ronaldo to be happy ?

You are not alone. But Wenger spoiled us in the past, so we hang our hopes on them, as the first team doesn’t provide any… I’ve seen now a lot of comments, that we should go back to Project Youth and it made me think of the miracle Wenger produced between 2005 – 2015 or so. I think things fell apart once the pressure of winning became too great, as Wenger personally changed his approach to the game more to be about style and personal/player development and not titles… It’s kind of funny, that what “destroyed” the club and will… Read more »

Fairly sure they’d be underwhelmed by you.

His all round game looks good and his movement is very good. I imagine once he gets a goal the flood gates will open becuase he gets in a lot of positions, he just looks frustrated and over eager to impress right now

Find it utterly bizarre hw much of a pasting Eddie get from fans on twitter yesterday (yes, I know. twitter).
What’s the point in even playing for arsenal? Fans will right you off with just a few games if you don’t look like Messi.

I’m convinced if we still had Harry Kane at Arsenal, fans would’ve deemed him not good enough and demand he be sold (he had an Eddie-like goal scoring rate for Spurs academy at all levels, but struggled initially when in the first team and for all his loan spells).

Even Auba the league leader has missed a couple of easy goals lately.

Auba misses a hell of a lot

When Eddie missed the target with the second of his chances, I chucked my glasses at nothing in particular.
Guess I was so happy to see him playing from the start and based on his cameos up to now I was looking forward to a goal fest from Eddie.
Guess it doesn’t work like that, but I’m still backing him to come good.

just imagine you are in a team, where your main competitors are a £50m and a £60m striker. You can see, that he is not playing with the carefree/relaxed attitude you need as a striker. Hopefully, with a few goals and more chances he will believe more in himself, but I think 2-3 years of loans will be the next step.

Three years is a third of his career. He’s served his apprenticeship. He may need to gain a few pounds of muscle but that’ll come naturally enough over the next few months. Eddie’s confidence is not an issue.

oi, Andrew, you cunt, why don’t you post my comments

The internet is a funny place.

Bad xmas? Not hugged enough as a child?

Henry mutual come in and get Eddie until end of the season.

The jury remains out on Eddie. Yesterday he played like Welbeck. We don’t need more Welbecks. Three very good chances spurned against lower league opposition in a 3rd round tie at nearly 20 does not full me with confidence

Great hold up play from Eddie. Thought he got into good positions too. Great future ahead for him.