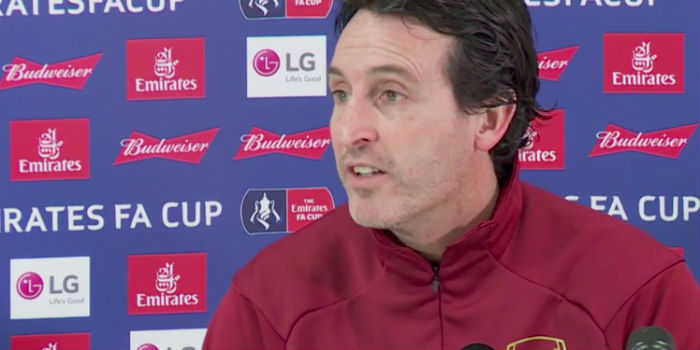 Since sacking Jose Mourinho in mid-December, the Red Devils have won seven games on the bounce scoring 19 goals; a run that has reignited a season that threatened to be a damp squib.

Having earned a creditable draw with Liverpool and seen off both Sp*rs and Chelsea at the Emirates this season, the boss is wary of the visitors, but not scared.

“It’s a different team,” noted Emery when asked what he’s expecting under the lights tomorrow evening.

“It’s the same players [at United] but they’re playing with a big performance now. I was watching their last matches and each player has a lot of confidence, with big performances, and now they are very dangerous.

“For us, it’s good because it’s a very big test for us in this competition. Manchester United and us have played 20 finals in the FA Cup, and we’ve won 13 and they’ve won 12. For this competition, it’s the best match to play.

“We are looking forward to playing this match on Friday because it’s at our stadium, the Emirates, in front of our supporters.

“We feel very well in front of them and we want to create a new atmosphere over 90 minutes on Friday, together with our supporters.”

The Gunners come into the match off the back of a clean sheet – a rarity this season – and Emery is eager for his side to continue taking collective responsibility for their defensive work.

“Yes, it was very important [not conceding against Chelsea],” he said.

“It’s our challenge in every match. But I think against West Ham we can work better defensively also and we conceded one goal but we still didn’t concede a lot of chances. The last two matches I think we have been better defensively.

“Against Manchester United against big and great players, we do the same work. We can be defensively strong and I think we need every player to defend, not only the defensive players, the attacking players can help us too.

“Defensively in the last match against Chelsea every player worked hard offensively and defensively with good spirit. We pressed against them and I think we can do the same on Friday and our objective on Friday is to keep another clean sheet against Manchester United.”

Unai may be excited by the prospect but I would have preferred an easier draw at this stage with the current injury list.
At least if we go through this round there should be no one else to fear in the competition

Wouldn’t fancy us away at City but other than that I think you’re right. Certainly a good shot at number 14. I’m quietly hopeful about an FA Cup/ Europa double.. Not because we’re particularly great but because nobody else really is! Think we’ll look a different team now everyone’s had a rest, they looked out on their feet at the end of that December run (especially Torreira who’s obviously so important). Anyway, I’ll try not to start thinking like that for at least another month..

FA Cup/ Europa double??? Lets take it one step at a time and get into the top 4 first. Not sure we are anywhere close to winning anything with our defense and ridicules long term injuries.

BTW Napoli and Inter Milan are now in the Europa League!

Personally think both of those trophies are easier prospects than top 4. And neither of those teams scare me particularly. Chelsea are our biggest rival in the Europa by a distance.

unless top dogs drop down from the champion’s league like last year. Last year should have been ours if only Athletico played better in the group stages…

That’s already happened I think, no? That’s how inter and psv are there- former in spurs’ group and the latter in with City?

only inter dropped down both were in spuds group

Meh, why not get an exciting game. at home we are a match for most teams and I fancy us to win.

Normally, the fourth round would have been a Jenkinson/Elneny job, but now we are probably starting the full first team (maybe with Čech instead of Berndt and Özil for Ramsey).

I will be interesting. Both managers are very clever tacticians and good motivators. Both teams have better attacks than defences. Probably, marginal qualities of the big players will decide: The decisive pass from Pogba, that impossible shot from Lacazette.

Skill + Motivation = Victory. Home turf is important for the latter, and my tip is an Arsenal win.

Hope we have the same atmosphere and intensity at the Emirates like when we won Spurs 4-2. That was an awesome day

Didn’t you hear him? He wanted a NEW atmoshere. ?

I would certainly play the same 11 that started against Chelsea, but with Maitland Niles in for Bellerin.

Probably out of contention for the league gold, the cup is important for both teams. But a CL spot means £60 millions in extra income, so I guess both managers will have next week’s PL games very much in mind and rest a couple of players if at all possible.

Please God we have to win this one, wouldn’t be able to deal with the annoying United fans if we lose. COYG!!!

I guess Ozil won.t be starting then

Defense is as a unit not just the back line.

Our midfield has to remain vigilant and watch runners into our box.

If we can play two up top again and get at their Cbacks, force mistakes higher up, then the only thing is we need to be very sharp with chances gain authority early on and deflate them before they can gain confidence.

May see Ozil this game I think. Ramsey may leave this window so he might get protection as we come into business end of transfers (if any of course).

Unless Juve feel like they want to be generous and send a small truck of money over to us, Ramsey’s not going anywhere this window.

Alex Scott….its how we defend as a unit that is key.

Plus with Hector out, our need for a wide player on the right (unfulfilled for several seasons now) is even greater.

Perhaps we should get Alex Scott out of retirement. She’ll make a better Bellerin cover than Lichsteiner!

can we teach him another word rather than performance please