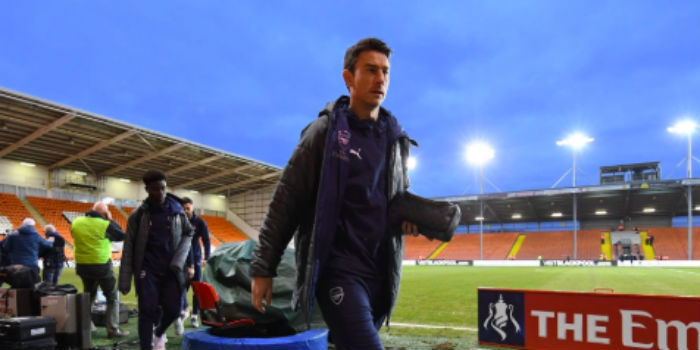 Unai Emery has confirmed that Laurent Koscielny pulled out of this evening’s FA Cup third round tie with Blackpool due to a back injury suffered in the warm-up.

The Frenchman, only recently back from a long-term achilles injury, had been named in the starting lineup but was replaced at the last minute by Carl Jenkinson.

The switch necessitated formation change with Jenkinson playing at right-back and Stephan Lichtsteiner joining Sokratis in the middle of a back four. They went on to keep a clean sheet as the Gunner secured safe passage to the next round with a comfortable 3-0 victory.

Having lost Rob Holding for the rest of the season and with Shkodran Mustafi, Nacho Monreal and Hector Bellerin all working their way back to fitness, Emery is hoping that Koscielny’s problem is not serious.

“Yes [it’s a back problem],” he told his post-game press conference.  “I hope it’s not bad. He has one week to rest and to work, thinking about the next match against West Ham.

“I hope he’s going to be OK for the next matches but before the match, he felt some pain in his back.

“We decided it was better for him to not play. At the moment, with our problems at centre back, it meant we were able to look at different players in different positions.

“Today that was Lichtsteiner, who played with very good commitment and concentration to help us at centre back with Sokratis. ”

As Emery mentioned, we face a rejuvenated West Ham at the London Stadium next weekend and then Chelsea the Emirates. It’s possible that the defence will be strengthened by a new recruit now that the transfer window is open, although who that will be is anyone’s guess right now.

Lol he wont say it but surely he knows Lich is D.U.N lol.

Lichsteiner looks like he panics now whenever he has the ball. Just goes to show the speed of the premiership

Özil’s wages and body language on the pitch make him someone unexcusable. It’s unfair and harsh, but it is what it is.

I am not an Ozil fan in the sense that I haven’t been satisfied with his overall performance for the club at all. However I think the accusation of fake illness is fake itself.

Jenkinson is a better option to Lichtsteiner at right back, neither are the answer but the Swiss man is beginning to resemble Hans Moleman

Not playing well at all at Munich

I don’t think we will see a Cback unless maybe that player Calero from Zaragoza who is under 13m euros. Emery has been careful sheperding his assets in Mustafi, Koscielny both of whom will be first choice now next to Sokratis in back 3. But too many changes at the back (forced mostly by wear and tear) has been the issue. We held well (if with shaky moments) for a long stretch with HOlding, Mustafi and Sokratis. Adding a new player into the mix may be difficult considering we are half way point of season. Probably best to retain familiarity… Read more »