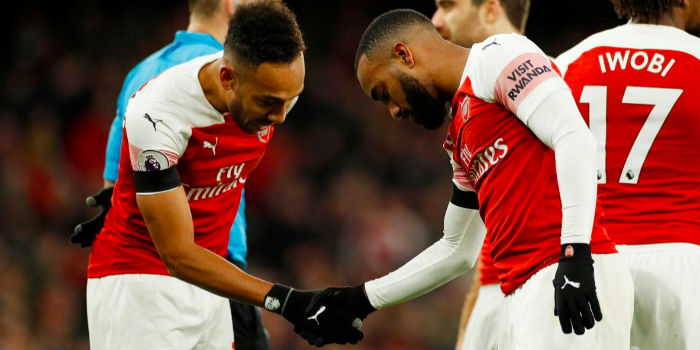 Unai Emery was pleased with Arsenal’s ‘needed’ 4-1 win over Fulham and explained his decision to take off goalscorer Alex Lacazette was a tactical reaction to counter Fulham’s introduction Jean Michael Seri.

A large portion of the Emirates crowd booed the Spaniard’s decision to replace the French striker, who initially reacted with frustration at once again being given the hook.

Lacazette soon cheered up as he accepted a standing ovation and was later seen celebrating with Pierre-Emerick Aubameyang on the touchline after the Gabon international sealed the win with a strike seven minutes from time.

“We spoke before in the dressing room about today being one day where we can be consistent here with our results.

“We are behind the first four teams in the table, but we want to continue to be close and maybe in the future we can be in the top four if we take our opportunities.”

Emery went on to defend his decision to substitute Lacazette.  “I understand the supporters,” he said.

“I need to do my work. Tactically, we are thinking that in this moment we needed to change to get more balance.

“Above all else, we know Seri very well and we needed to get a player close to him, to not let him play with the ball very easily.

“When Aaron Ramsey came onto the pitch, he could do that and can also help us in attacking moments and he scored.

“The reason for the decision was this and I need to do my work. Every supporter can think different things tactically, but for me today, Lacazette worked very well today, scored and he helped us. His reaction was very positive.”

The busy festive schedule may be over, but with games coming up in the FA Cup against Blackpool and then tricky encounters with West Ham and Chelsea, Emery knows his side must continue to focus on improving.

“Our challenge now is to improve defensively,” added the boss.

“What’s the reason? Maybe different things. First, not with every player, we need to defend more than we did today with different injuries.

“Today’s the first time we could play with Koscielny, Sokratis and Mustafi – and the injury to Mustafi in the first half meant we had to change to four at the back in the second half. But we are very happy with the attacking players scoring lots of goals like today, but we need to take more balance defensively and to improve.

The best bit today was when the crowd sang “Sign him up” after Ramsey scored.

Criticism of Ozil … is nothing objective. Just flavor of the month.

We went fro 2-1 to 4-1 after the substitution so it worked out well for Emery, good decision.

Great to hear the rational behind Laca’s substitution. I like it when Emery does a bit of pedagogy, hope this will help some people understand his schemes….

That is a refreshing response. Good to see our manager paying attention to opposition players. Hope our cunty owner and our board allow him to make a couple of signings.

When will Kroenke go from is to was?

Credit to Emery, putting Ramsey on worked well. One of the biggest things it did was get movement off the ball happening and others started pressing better.

I do feel for Lacazette though, and hope he gets his shot at some of the late game increases in goal opportunities we seem to have a pattern for.

*movement off the ball in midfield and between the lines…
Damn tablet (or my clumsy fingers) cut out half a sentence.

I feel for Lacca, but it’s really sad how quickly the fans are already turning and questioning Emery’s decisions.

We’ve been asking for a more tactical and flexible modern coach for a while now, yet as soon as we get one, we’re questioning and booing his decisions (even before they’ve played out) halfway through the season. That’s some real patience. /rolleyes

Yeah, he’ll sometimes get it wrong, but it took quite a few years for the boo-boys to fully stand up against Wenger. Barely 6 months and they’ve already started.

Most fans are fair weather and frankly if you listen to most of the people on say AFTV, you’d lose brain cells. But for BHA and Liverpool, the gaffer has got every line up right and MOST of his subs have been timely (unlike Wenger) and made IMPACT if not scored. He tactically set up with 3 up top as I expected partly bc of lack of resource but partly bc it plays to the strength of certain players. He took out Mustafi for precautionary reasons (Unlike what some fans would prefer to imagine) but also partly to add an… Read more »

The Manager Out Section never sleeps. It just goes quiet during certain periods but it’s always there waiting to come out at any given opportunity.

Our fans have been embarrassing more than once this season. I really think this should be way more discussed than it actually is. They’ve complained about Wenger and the fact that we havent changed things over the years and now wher they have what they wanted (more changes within a year than I can remember any other club going through in such a short time) and there still complaining and creating bad atmosphere when they’re not 100% convinced by the managers decisions. If other players see how Iwobi, Maitland-Niles and Ramsey( 2 academy products and a player who’s with us… Read more »

We know there will be a bit of doubt in the minds of some players following last defeat.

We know we’re coming through a tricky spell of games close to each other with impact to a squad already thinned out by injuries before.

Sure we aren’t fluent today and certain players were not on others’ wavelength.

BUT support the team FFS.

And yes we laboured, looked tragic at the back at times (even without Mustafi)..conspired to miss more opportunities (Auba) but hey it’s 4 goals to 1!

Laca played well today as he has been for a while. I thik he brings a lot of benefit to the team and he took his goal well. BUT the gaffer is absolutely right to change things around. With a fragile lead, the last thing he would want would be to thin out midfield (elneny is mediocre, Torreira has been off par in recent games) So it would be either Auba or Laca making way. With Auba still leading the charts, of course Laca had to give way. In any case correct decision exploiting the lose marking Fulham exhibited in… Read more »

Remember one time Seri had time on the ball bc we did not close him down, he put a ball in that almost led to a goal (Mitrovic) but for it being called offside.

Mustafi injured again. Could mean that our experienced (and somewhat brittle) centre backs have to play even more. Would have preferred a young team against Blackpool…

The Gunners subreddit is cancerous. “Kroenke wanted a finish 5th league in europa manager expert so he got one” (overlooking taking a terrible vlanecia side to third)

“He just tinkers, He’ll end up fulham manager like ranieri”

Why can’t lacazette get a run of games now and be our front man. Sub Auba instead now, been missing easy chances and doesnt do as much as Laca does with the ball, in terms of technical quality and allowing others around him to play off him. Laca also works hiss ass off, he should start from now on.

maybe because Pierre is the top scorer and Unai needs to do some squad management. I feel for Lacazette, too, but something’s gotta give. A bit of patience and team work is required, not only from Laca but the whole squad and even the fans. every player wants a needs to be managed (differently) so I would guess finding the right balance between the importance of matches, player fittnes and form and tactical adjustments make it a rather ungrateful job for Emery. Add every fan’s own opinion –> no way he will ever get it “right”. I for one support… Read more »

This doesn’t make sense. Why couldn’t he ask Lacazette to get on Seri or ask one of Guendozi or Xhaka to do that job. Lacazette brings so much to the team; he unsettles the defence and wins the ball in dangerous positions. None of our other forwards do that. It’s what makes Liverpool so dangerous – Firmino and Mane hound defenders and DMs to win the ball before springing that quick counterattack. Taking out Lacazette while leaving some untouchable players on the pitch just doesn’t make sense. I applaud Lacazette for his reaction but Emery is stoking fires of frustration.

Sorry to burst the bubble, but only thing Emery brings to Arsenal is luck.
We should have been 2-0 down, before our first goal. And Fulham had enough opportunities to score at least 2 more goals afterwards.
Yes, we could have scored 7-8 ourselves, but thats is always expected.
The only thing Emery had to do was to improve the defence, but it looks beyond his capabilities now.

Yes, it was lucky that he had the tactical nous to put Ramsey on…
It’s lucky that he’s within top 4 contention, has us in the Europa league having won it 3 consecutive lucky times.

Perhaps you would like to present your insight on what he should doo differently, and what it is he’s doing wrong?

So what’s the verdict on Mustafi? What sort of injury did he sustain?