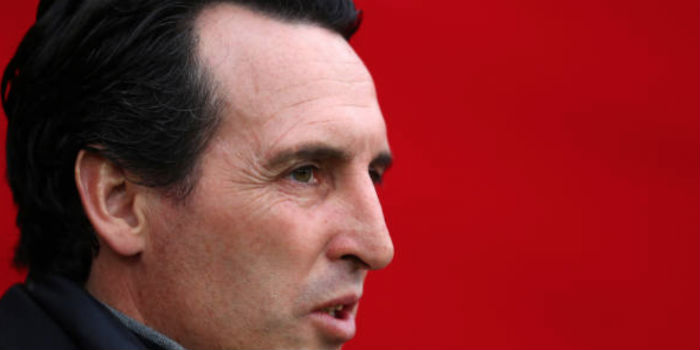 Arsenal take on Blackpool in the third round of the FA Cup tomorrow, with Unai Emery looking to start the journey to another success in the great old competition.

The Gunners have lifted the famous trophy 13 times, more than any other club, and the Spaniard says that although he’s likely to use some fringe and youth players, his team selection will respect the cup and tomorrow’s opposition.

Speaking ahead of the game, the Spaniard said, “It’s a title and it’s a possibility for us to do something important.

“We are going to start that at Blackpool. We know them because we played against them and we have the respect. We’ll prepare for the match with this respect for them, but also respect for this competition.

“It’s a way to win a title. We want to play and have positive things with our supporters in this way.

“I want to take a team with the players being competitive. The team for Saturday is the same.

“Maybe we can share with some players who are playing less, or some young players, but thinking above all of finding a big performance there with our players.

“This is our idea at the beginning.”

The teams did meet earlier in the season, with Arsenal running out 2-1 winners in a Carabao Cup clash in October.

It’s likely to be a strange atmosphere tomorrow, with home fans continuing a long-running boycott in opposition to the club’s owners and they’ve sold just 2,500 tickets at this point. The away fans allocation of 5,000 has completely sold out.

For more on that situation, check out today’s brand new Arsecast below.

Ah,Let Rambo destroy them as he owns this cup, but give the tired ones some rest. FA should be lowest prio after Europa and Top 4. Look at what we lost in the last pointless Europa League game.

I just felt like it was me doing a pre match dressing room in football manager.

The Blackpool fans boycotting their dodgy owner have my utmost support.

Here’s hoping that Jenkinsson scores, even better if it’s twice. The kneeslide it would result in brings tears to my eyes.

Would probably bring an injury too knowing our luck!

While I and probably the rest of us are not happy with having Kroenke as owner, it could always be worse. Just ask the Blackpool fans about the Oystons (or whomever it is now?).

Hmm less intimidating atmosphere I guess if no one’s there?

A Different George
Reply to  Jack

Not sure Blackpool would be super intimidating even for our young players. At least there will be some there–every player I have heard interviewed hates playing in a genuinely empty stadium (when a team is ordered to close the stadium as a punishment for fan misbehavior).

Completely 2 off topic thoughts
– yesterday’s game intensity was crazy and reminds us the gap that seperates us from the top of the league. I’m sure Emery is working on it and hope he will have KSE support…..
– ONE invincibles, there’s only ONE Invincibles….??

Weirdly – I mentioned him in a comment on another post two days ago. And then he scores a brace yesterday!!! Watch his first… If only we had a midfiedler who finished like that (with EITHER foot!!)

We do play with great intensity at times. We just do not do it enough.

Well we saw that intensity from our lads in the game against Tottenham. I watched the game yesterday and it was pacey at certain times and then again the centerbacks on both teams made a lot of passes to eachother. It has taken both Pep and Klopp a few years and hundreds of millions to work out a system that everybody on the team knows and carries out.

A Different George
Reply to  Runzac

To be fair, as Klopp said afterwards, neither team played their best, precisely because their opponents prevented that.

A long-running boycott in opposition to the club’s owners? Now there’s an idea…

Would never happen at Arsenal. There’s too many other fans and football tourists willing to take others’ seats at the ground.

I know. Even if we all stopped going to the stadium, commercial revenue from around the world would probably still make Stan a profit. Our ownership situation is a tragedy really.

Not true. It was last season’s virtual boycott (i.e. apathetic supporters not bothering to turn up) that drove out Wenger. If our form continues to deteriorate and we drop out of top-four contention by say the end of March then watch the crowds disappear. Nobody is interested in watching us scrap for fifth or sixth place. You don’t actually need a boycott. The skinny latte-drinkers will simply decided that they’d rather go to the theatre that watch a mediocre, mid-table Arsenal side. Then maybe Stan will wake up and smell the coffee. Without proper investment his “asset” will turn into… Read more »

Agree, that’s the reason Wenger was let go. Not because Gazidis and Kroenke wanted to win the title.

No, its really not an idea. Its fucking idiotic. Blogs – blathers about the club supporting the manager in January transfer window – as if that will happen. Arsenal is a self-sustaining club. Many of us like it that way. The new manager has 2 new defenders (Licthsteiner and Sokratis – 3 if you count Torriera) this campaign. Kos is back playing (rusty, and not the player he was, but back). There will be no January buying. Blogs – blathers on about Ozil, as if he knows anything about what’s going on behind the scenes. And, if he does, why… Read more »

If you count Torreira as a defender then you know a whole lot about the club to be pretending what you wrote above.

A win in the fa cup coupled with the fact we dont have to listen to liverpool players talking about going the season unbeaten would make for a great weekend.

What were that lot smoking over there at anfield.

I never thought I’d ever say this but fuck the FA Cup. Emery must use the Blackpool game to rest as many first-team players as possible. We absolutely can’t afford to injure any of our remaining defenders in this game; and the likes of Iwobi, Auba and Laca all need rests after a hectic Christmas schedule. We are in a massive dogfight with the Chavs and Manure for that fourth spot and don’t need this distraction. The only cup competition that really matters now is the Europa League: win that and we’re back in the Champions League, where we belong.… Read more »

I think Smith-Rowe might still be injured, unfortunately. I’m sure some of the 2nd string will get a run-out, but there’s not that many of them, so there will still be a few of the 1st team having to start.

I thougt Arsenal vs. tottenham was as good, even better. Auba played every minute but I think Laca would relish to complete a full game.

I have no love for City, but it is quite remarkable that no one mentions that they have played all season without De Bruyne, probably the second-most important player in the league last season. Imagine Liverpool without Salah (or Van Dijk); imagine Chelsea without Hazard.

Elbon
Reply to  A Different George

Different. City have at least 2, probably four players close to De Bryune’s level. Neither Chelsea nor liverpool(Mané, maybe) have another player close to those levels of Salah or Hazard

Sadly i think we will have to do a similar boycott in the near future if we want our club to be a top club again.
Kronke the leech has to leave for us to be successful.
We must realize this and drive him out, like they did at Liverpool and turned their fortunes around.

I think Emery wants to keep Rambo till summer given we have paucity of resources at the moment. Hope to see him played. Also probably have to give one of the mids a break. Torreira last 3 matches hasn’t been quite as sprightly and been robbed of the ball (leading to goals) 3 times. Elneny as limited as he may be might have to be cycled in. At very least we do get hard work from the Egyptian and it is Blackpool with no disrespects. But we need to take this one seriously. If we let our guard down, we… Read more »

while we sit around worried about ozils little pussy feelings and rambos greed the team are get the job done. Its time to get rid of these get players in that want to play for this top club called arsenal. Theres plenty players quality that would sweat blood to play for arsenal . Rambo can go earn 300k a week at juventus and be injured half his career like wilshere and ozil can go play in turkey. They seem to live hom there

We slowly loosing laca a world class striker while we talk about useless overpaid ozil and injury proned greedy ramsy. Give me Douglas costa and il even take drinkwater ahead of ozil