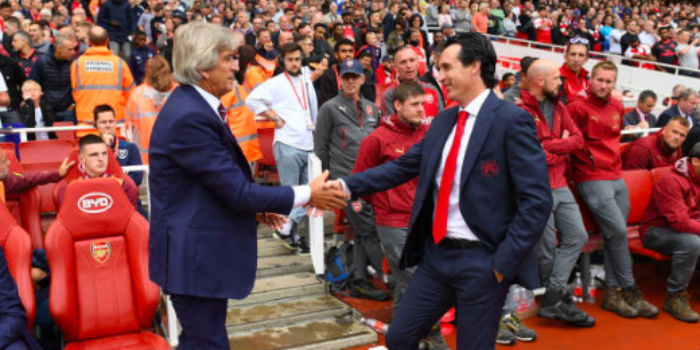 The two men know each other well from their La Liga days with the boss, in charge of Valencia at the time, tackling the Chilean’s sides at Villarreal, Real Madrid and Malaga.

The duo also came together when Sevilla played Manchester City in the Champions League in 2015 and in August when the Gunners won 3-1 at the Emirates on an afternoon of fraught action that could have gone either way.

Ahead of tomorrow’s clash, Emery played up Pellegrini’s qualities.

“He was the coach at Villarreal and Real Madrid when I was at Valencia. We know each other very well.

“I know he needs time to create his idea with the team. I think they are improving and they also have good individual players with quality, like Anderson, like Arnautovic – who are very good players.

“Usually [Pellegrini has] very offensive teams. They usually play matches with a balance tactically but above all with technical, offensive players.

“I know that Saturday will be a difficult match because we need to impose our ideas but also for 90 minutes, we need to control their players and their tactical ideas. The respect for us to them is very, very big.”

On tomorrow’s test, Emery, who is able to call upon six players returning from injury, added: “I think it will be a difficult game for us and the most important thing for us is that the starting XI and the squad are concentrated on this match.

“What’s most important is the quality of the players on the pitch imposing our ideas against them.

He went on: “We want to find our best performance with the players. Some players can recover their positions in the squad and in the first XI, and some of them we need their performances now.

“Above all, we are going to have one mix of the players that have been playing and helping us with good performances and adapt against West Ham, imposing our idea on the pitch.

“That’s the mix [we need] for Saturday. It’s good news that we can have more players available.”

Tough match. If we defend like we have been most of the season, they’ll score goals past us. Then it would depend whether we stop fannying on with the ball in midfield and get the service to Auba and or Laca quickly. This is a big test. Lose it and we’re in for a rough month, especially with Chelsea and City to play soon.

We need to make sure we keep possession and deny service to Felipe Anderson and Arnautovic. Gutted we weren’t in for Anderson when he left Lazio.

Agreed. Quality player. Could have sold Ramsey and Welbz to get him in..he covers both positions well..and turned a tidy profit

The unpopular opinion which I am not afraid to espouse is we lost goals to Soton, BHA and Liverpool not bc of Mustafi. Torreira lost ball control in midfield 5 times in those matches 3 of which led directly to goals against us. Had it been Granit, this would have been a huge topic for “discussion”. And this isn’t to criticise Torreira who has been largely excellent but I think some people need to adopt a more balance opinion instead of electing to see what they want at convenience. Likely Torreira has either hit the wall (physically) or opponents have… Read more »

With regard Hammers, we have thankfully defensive players coming back in. Which likely means we will not be going out in market to buy yet another Cback. Frankly why we let Chambers out on loan to barely feature at Fulham is beyond me. Mavropanos whom some want to imagine otherwise, is largely untried. Lichsteiner was a waste of time band aid brought in by Mslintat. But we still have Koscielny, Sokratis and Mustafi (plus Monreal working back in) I feel Koscielny struggled naturally in first few games but is coming back to sharpness. That left side of the back 3… Read more »

Wary of Pellegrini’s ‘Hammers’? If we’re on about Arnautovic I’d not give him the benefit of regarding him a ‘hammer’, I’d say he’s more of a ‘wedge’… for they are the simplest of all tools…

Twatsloch
Reply to  Leno me, I’ll be your friend

Shame Holding isn’t there to break his other arm. Arnautivoc needs targeting tomorrow. The thug cunt!

Hey we aren’t stoke ! ? Although I won’t mind some shithousary from Sokratis.That’ll do just fine I believe ?

Arnautovic drew first blood. If anyone brutalises him, tough. Fuck him!

Hopefully Arnautovic will have his mind on the China deal.

The good thing about him playing at the Olympic stadium is that he can’t produce his party trick of pushing players into hoarding. Debuchy never recovered.

If he’s off to China it would be nice if he went there with a broken leg.

Hoping for an attacking lineup tomorrow, I’m at peace with the current personnel not being able to defend, (It is what it is……) Let’s just go on the offensive and blow these fuckers away.

Odds on Samir Nasri scoring and playing back to his 2008 form against us?

Sammy your a clown. Before the watershed version.

Our fans will abuse of Samir and be sure he will try to fight back by scoring against us.

Of course,he should be.They are our direct rivals this season,so a really good team.we must be cautious.Now that they have got Nasri in their team we should be extremely careful of their front four.This can get really ugly if we try to play attack.park the bus,send long balls and we’ll have a decent chance of getting something.Personally I think it’ll be a very welcome point for us if we can manage to hold them off ?

Come off it, West Ham are pants, mid table mediocrity, only won 4 out of 11 home games. Even conceded more goals than we have. No chance The Arsenal go there to park the bus. We got Ozil and Bellerin back in the squad, let’s go there and make a statement and win 3-0.

thank you richie for the laugh, you read in-between the lines and got exactly what he was saying without even realising it ??. people need to lighten up (sarcasm) ??

Why would a Spurs troll be called Tas_Gunner

Spurs troll? I said “this season” they are our direct rival.aren’t they? what,ae you expecting us to win the PL this year? GEt your head out of your arse and see facts.west ham terrorized us regularly away from him.whats wrong with thinking cautiously? oh but yeah,gotta bang every team 10-0 cause WE ARE THE BLOODY ARSENAL and whoever thinks otherwise is a snowflake or a troll,gotcha ?

Emery English still generally sucks. Not hating, it’s funny too. This is one question for the player, one mix, big personality, he is giving good work.

I love his interviews though. What he lacks in clarity he makes up for with passion.

We’ve had a week to recuperate. Defenders have come back into the squad. Mids can renew proper function (Granit) I’m guessing 3 at the back Koscielny-Sokratis-Mustafi. Both wingbacks Kolasinac and Bellerin. AMN also potential should Bellerin still need one more match. Then Granit-Torreira axis in midfield. Torreira hopefully better rested and back to his best. UP top probably Auba and Laca with either of Ozil or Ramsey supporting or Laca or Auba striker with Iwobi left wide and either of Ramsey or Ozil other side or even Auba Do lets get those goals, not be wasteful and put it out… Read more »

Santi – looking for your own blog page? 3 posts already!

Saw Bellerin with his “fashionable” hangers on down Brick Lane the other day. Was quite the site to behold. Last time I saw him in person (in a non-football way) was on a flight back from Barcelona and he had a short back and sides. Still, if his improvement continues I don’t give a shit what he wears as long as it’s not a rival team’s shirt.

Abit off topic, im tired of seeing articles about fabregas on this website. He is not an arsenal player nor a legend. Please stop showing anything about that traitor.

We haven’t done a single article about Cesc Fabregas.

Fabregas was a great player for us who a lot of fans took to their hearts. Fair enough if you think he is a traitor but personally I.m happy enough to read about him still and think of him fondly. He, like RvP, and others got out while they could still win something in their careers. And hindsight shows they were probably correct to. The Wenger boat was sinking.

Actually I would say statistically he is an Arsenal legend, in terms of assists to minutes ratio, he has to be up there amongst the best in our history, if not the very best.

Exactly, and while we are at it, I’m tired of reading about Nasri every five minutes on this website. I don’t care whether you use words or not, I still don’t want to read it! He is not an Arsenal player nor a legend nor nor a human. Please stop live-streaming anything about that flatulent cretin.

And how is he a traitor? He moved back to his hometown club, which is of course understandable, was offered back to Arsenal in 2014 and Wenger said no cause we already had Ramsey, Cazorla, Arteta, Rosicky, Chamberlain, Wilshire.

Where’s Jack today? Is he off injured again?