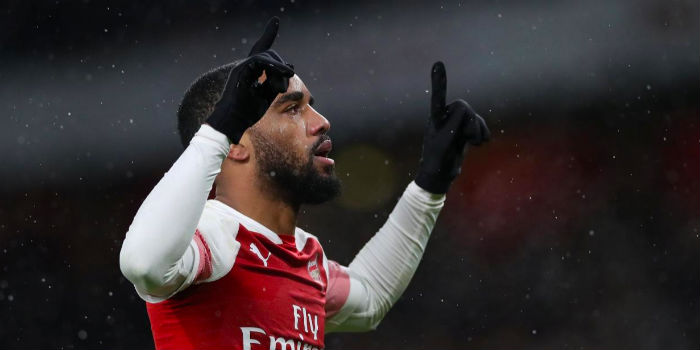 Unai Emery says he was pleased his players did enough to seal three points but admits Arsenal struggled on the way to a 2-1 win over Cardiff City.

Pierre-Emerick Aubameyang’s penalty, awarded for a foul on Sead Kolasinac, and Alex Lacazette’s solo effort put the Gunners in a commanding position before Nathaniel Mendez-Laing pulled one back for the visitors in added time.

The win keeps Arsenal within touching distance of the top four ahead of a tough trip to Manchester City on Sunday.

Facing the BBC cameras after the game, the Spaniard reflected: “We are happy. In the first half we didn’t deserve to go in winning and in the second half we played better, controlled the match better and created more chances.

“We started well in the first 10 minutes then I was not surprised with the performance as Cardiff worked very well.

“We struggled a lot in the match but it’s very important to get the three points. We know each match is difficult and we are happy – the difference is small details.”

Arsenal will have to improve on Sunday if they’re to take anything away from a trip to Manchester City. Pep Guardiola’s title-chasing side lost 2-1 at Newcastle and will know they can’t afford to drop further points. It’s going to be a tall order, but at least we head there with two wins on the bounce in the league.

I have a feeling we will get a result at man city, not sure why, but I don’t feel the sense of dread that I did with Liverpool away

Arsenal lost the three last matches against them 3-0. With our defence, I cannot spot a viable plan. We will certainly not keep a clean sheet. Hence, we have to make 2-3 goals to win.

I feel the dame sense of dread that I did with Liverpool away.
But even in that game, we started the game right, then as usual shot ourselves in the foot and never recovered.
Against City, if we play conservatively and defend as a group and avoid unforced errors, maybe we’ll get something out of it.

Well that’s what you get for having most of your defenders injured and starting with Mesut Ozil. For gods sake, is there anyway we can keep Ramsay and get rid of Ozil?? Over the last month especially, the difference between Ramsay being on the pitch and Ozil being off it has been collassal.

Wrong, thanks for your Trump impression rewriting the narrative to fit your agenda. Our dip coincides with Mhki’s absence. SO long…

Ozil being off the pitch also coincided with our two biggest wins of the season by far. I think it’s fair to say that whether we win or lose depends on much more than one player. But it’s also fair to say he had a decidedly average game tonight.

A fair assessment. Frankly I’m tired of the pro and anti-Ozil agenda. Anyone with eyes and common sense can see that Emery is trying to build a team that can attack and defend together. If you fit into that mold then all is good, if not…

Correlation does not equal causation.
That’s like pointing out our best performances (Fulham away, Spurs at home, Chelsea at home) have all happened without Ozil, ergo….

FYI I’m not saying that’s the case, but that such loose correlations don’t say much of anything.

And over the start of the season? And over the latest seasons? Btw it’s 3 tackles for Özil today, more than anyone else.
Ramsey against United was still 2-1 and for us…

So you think he worked harder defensively than Torreira, Guendouzi or Lacazette?

I just quote stats. Whether you like it or not.

Brainwashed tbh.I used to get the hate and demanding more from him during the past month or so but guy without any support dominated most of our stats tonight and put on a real shift.and people are still slagging him.Its fine though,majority hates him now so one or two counter opinion wont matter.I want Arsenal to do well above all else so I hope whatever the hierarchy devides to do with him,it pans out well.

Also don’t forget the #standwithozil shit.took a whole of 1 month into the season for fans to forget all the stuff during the summer and to compare their own pocket money with ozil’s wage and sob and rage.good stuff.

What is the point of this comment?
Are you butthurt that he’s not producing for your fantasy team?

Its called Arsenal Football Club. Club … that means togetherness, backing your players, and not being a numpty.

The more I think about it, the dumber you comment really is. Supporters comparing their “Pocket money” whateverthefuck that supposed to mean, to an elite footballer’s? Are you high?

Özil made his 500th goal scoring chance today, that’s quite good, I’ll never understand the hate towards the guy. The other thing I don’t understand is the Man U wank fest going on for drawing 2-2 with a billion dollar squad against Burnley, but when we draw against lower teams we are cunts?

We perform wankfests after youngsters bang twice against lower league opposition in mickey mouse cup and supposed prodigy’s have one average game vs relegation fodders.our bar is far lower tbh.

most of these stats are incorrect.

Yes he was amazing we all saw that! including Emery that’s why he kept him on the pitch.

If there’s one player that has contributed to our drop in form it would be Holding’s injury.

Holding and Welbeck…in fact if we hadn’t had such devastating injuries all season I think we would have made top 4 comfortably. (I swear I haven’t been drinking)

For a long time I haven’t felt this confident when we play the big teams. Bring on City. COYG

First half was dire. Started OK but soon lost invention. I believe Emery opted for caution (and rest on some players ahead of City) so he played Elneny in the holding role but he sat so deep it was a back 3. That effectively took out some of our invention going forward bc Granit in similar position would have been able to release us quicker to the wings where Elneny struggled to send forward balls. We ended up back peddling as usual and passes around the back did not help. One of the reasons why I feel Emery is keen… Read more »

Pressure is on City. They have to win against us to stay alive in the title chase (unless Liverpool fail to take their chance tomorrow to extend the lead!) so i think if there ever was a chance to get a result at the Etihad, next match is it! Alternately, they could handle pressure and batter us :O

We won, that’s all that mattered

I’ve just returned from having watched Valencia give Getafe a well deserved beating in the Cope Del Rey. The atmosphere at the Mestalla was just incredible. All the better for seeing both Flamini and Gabriel of course. Gabriel was really good tonight.

Forgive me but Arsenal playing tonight slipped my mind as I’m on holiday. Seeing the same old misery here though and the contrast between that and what I just returned from couldn’t be bigger.

Fucking hell, some of you lighten up!

I fear for us on Sunday. After that shock defeat Tonight City know that they absolutely must beat us. And we look as vulnerable as hell at the back.

I didn’t see our game tonight but I’ve heard that Cardiff were the better side for an hour. That’s worrying.

Somewhat like during that early season run of wins, opposition could/should have had 3 goals but finishing was awful. Stadium only two thirds full but reasonable atmosphere on cold sleety night.

My view was that our forwards have forgotten how to make the runs for Ozil passes although Cardiff worked very hard and offered no time on the ball for anyone all night.

if we watch the game we can see what ozil is about. his passes and movements are very intelligent. the passes and flicks opens up teams, increases tempo, keeps the ball moving intelligently for our build up play. playing 3 DMs behind might be excessive though. i’m thinking if we could have ozil and iwobi play behind laca and auba, and have torreira and guendouzi to do the dirty work behind them it’ll be quite balanced for the team.

We are ordinary. The squad needs to be flipped and this will take some time. Till then we will beat up small teams at home, win the occasional big game at home and lose to smaller teams away.
Nothing can be done about it till we change the make up of the squad. So I guess we need to be patient!

Laca, Auba, Ozil, Leno, Monreal, Holding, Torriera … these are anything but ordinary footballers. I’d throw Mhky, Bellerin, and Ramsey in that group as well.

Ramsay and Ozil are going anyway. Id argue Leno is mediocre, as is Mhyky and Monreal is a legend but approaching 33. So that leaves 5 decent players and a need to flip half the team. I dont dislike the remainder of the squad, but they arent going to allow us to challenge for the premiership. We need to improve our average quality and just feel we will get more of the same for a couple of transfer windows. Liverpool did it when Klopp arrived, Spurs with Poch and its our turn now. Will keep cheering us on with blind… Read more »

This time I spent time to watch in detail our defending or lack of. There’s a reason for letting a relegation team have 19 shots during the game. We do basically two major errors, the defenders do not close down the opponents when they get the ball. They stand their about two -three meters away and try to block or whatever they’re thinking.( assuming that they’re thinking..). It gives to opposition ample time to either shoot or try a dribble. Aguero would have an easy hattrick yesterday. The second observation is our midfielders inability to close down players in the… Read more »