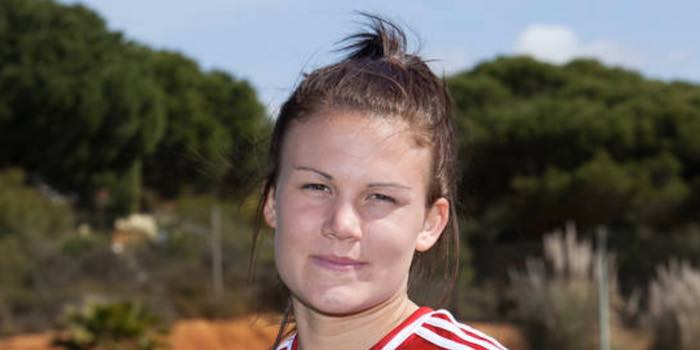 Arsenal Women confirmed the signing of Danish international Katrine Veje from Montpellier this week. I spoke to Scandinavian women’s football expert Katja Kragelund about her career so far and what Arsenal fans can expect.

1. Let’s start with the basics, which positions can Katrine play in? (We know Joe likes a versatile player!)

She’s best as a left winger, but she has also been used as a fullback and has played there on a couple of occasions for the Danish National team.

2. How would you characterise Katrine? What are her strengths and weaknesses?

I think there’s two parts to this, when she plays a LW and when she plays as a LB. As a LW her strengths are her technique and her abilities one on one. Her weakness is that she can go missing in games. She could also be more decisive and contribute more in terms of goalscoring.

As an LB, which is not her natural position, her strength is her speed and she has often been utilised as an Lb when the opposition has a fast winger. Her weakness is that she isn’t schooled as a defender, and that she first and foremost is an attacker. This means that she has problems with positioning and awareness.

She’s also vastly experienced, which is always a strength.

3. A lot of people say Katrine can be quite inconsistent, how is she seen in Denmark?

She can be, but I do think it has gotten better over the years. She’s considered as someone who is very skilful and good one on one, but she can also become too easy to read at times. You can’t put a finger on her work rate though – she never stops running.

4. Can you say anything about how her spell at Montpellier went and why it was brought to a premature end?

From memory I think it started off relatively well, but a change in tactics meant she no longer fitted into the system and the style of play. It’s been obvious for a while that she wasn’t favoured and was on her way out. Obviously, it’s hard to say whether other factors where in play.

Interesting article with a good insight into Vejes life at Montpellier and why she had to leave. https://t.co/APKcrG4iBE

5. What are the things you think Arsenal fans will realise very quickly about Katrine?

I think they’ll quite quickly see that even if it isn’t her day out on the field, she’ll never stop fighting. She isn’t one to stop if she loses the ball, she’ll do everything to win it back.

6. Danes don’t tend to have trouble acclimatising in England, but it is notable that her two spells outside of Scandinavia- in the US and in France- were quite short. Will that present an issue for her in England in your opinion?

She did cite homesickness, and not sporting reasons, as a reason to leave Seattle. However, England is just a tad bit closer to Denmark than the US ;). Homesickness was something that was also an “issue” when she was a youth player, and she has stated she needs to be comfortable outside of the field to play well. I think Arsenal is a good match in that regard.

In terms of Montpellier, it was unfortunate that seemingly a change in style ultimately meant she wasn’t favoured. From the outside it seemed like she had settled in well with the squad – especially with the other Scandinavians.

7. She was part of the Denmark squad that made it to the Euro 2017 final, how did she play in that tournament and more generally, how has she played for Denmark over the years?

She started in every single game and had a good tournament. She showed some good defensive qualities, and she was the one that scored the goal against Norway in the final group game that secured Denmark a quarterfinal spot. She fought very hard for the team, never stopped running and she helped her defenders when needed. She showed at times how good she can be offensively, but there were games where it didn’t quite work out and she didn’t challenge the defense enough. She also missed some good chances. She shone in the final, where we saw the best of Katrine Veje: good defensively, played with confidence when she went forward and she challenged her direct opponent – and often succeeded.

I think that tournament summed up quite well how she normally plays for Denmark – There’s a lot of good, but also stuff to work on.

8.Are there any curiosities or ‘fun facts’ we should know about Katrine?

When she was a youth player she used to play on the same team as Rasmus Falk (FC Copenhagen) and, perhaps more interestingly, Tottenham’s Christian Eriksen.

Arsenal women seem more effective in terms of transfers than the men side.

Arsenal WFC are in a different position. We are bigger, relatively – think of the WFC as equivalent to Man United men’s team in terms of our stature in the women’s game – and because the salaries are so much smaller and transfer fees barely exist (though that is changing), no-one can outspend us.

As a Dane this makes me happy

Down to Joe now to get the best out of her.

In other news, great to see Kim Little is back in training.

Welcome on board. COYG