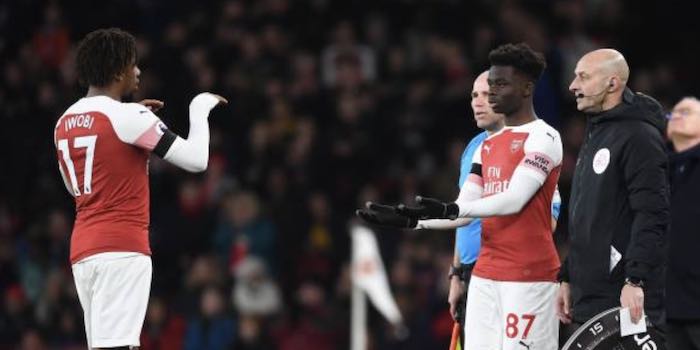 The 17 year old is another exciting talent to emerge from the academy, and following on from his Europa League bow last month, the winger took to the pitch in domestic competition for the first time.

The stats show he didn’t manage to touch the ball in that time, it was actually a Fulham defender who stabbed the ball to Sokratis to set up Pierre-Emerick Aubameyang for the Gunners fourth goal, but the youngster was just delighted to play his first Premier League minutes and is keen for more.

Speaking to the official website afterwards, he said, “Right now I’m feeling so happy. I feel blessed to have made my debut and get minutes on the pitch. I just want to thank my family, my friends and everyone at the club who’s helped me to get to this stage.

“It’s been a tough stage, a long stage, but through hard work and determination I managed to get here.

“I’m not stopping now. I’m very hungry. I just want to work hard with every chance I get.

“In training I just want to impress the coach so I can get back on the pitch.”

With Danny Welbeck out long-term and Henrikh Mkhitaryan sidelined for another month at least, he may well see more of him in the weeks ahead.

Arsenal 4-1 Fulham: Gunners start the new year with a bang

Saka in full training ahead of City clash

We’ll have a very youthful wing setup next year if he keeps up his progress with Iwobi (turning only 23 in May), Nelson and Saka. A bit of trickery and pace waiting to happen – exciting!

There was a young man named Saka, who looks like a tricky attacker, he cuts in from the right and sounds up for the fight, but for hunger try eating moussaka

And Bellerin and Holding are both just 23, possibly Nketiah too if he can push on

He’s been threatening to break through for a few weeks now, and I think barring our bad run, would’ve featured earlier.

He has a very unique alignment right now; both incredibly talented and also in a situation where the club is both kinda broke and in dire need of someone of his skillset (a fast, direct, left-footed dribbler winger).
Then on top his defensive endeavour (can play as a Left-back) makes him in interesting fit for Emery.

Hoping to se him start against Blackpool.

I think he needs to eat more to keep his energy levels high, being very hungry isn’t good.

COYG. More success this year and beyond

It looks like we’re going to have to rely on more of our academy players making the grade, Along with picking up rough diamonds from elsewhere. I can see Maitland Niles becoming a regular starter, I think we’ll likely persist with Iwobi providing he can add more end product. I can see Guendouzi becoming a world beater, he’s got real ability, drive, belief and character on the pitch, he’s got the aura and presence that the real top players posses. Emery is going to need time and patience to work, unfortunately time and patience is not something out fan base… Read more »

Anyone else having trouble to load the new articles in the android app since yesterday?
Even on Facebook I didn’t see the post match stuff until this morning…
Would be nice to get some feedback.
Cheers!

Yep, having the same issues. Reinstalling hasn’t helped either…

Was too lazy to even try that but seems to be working again….

Looks very promising indeed with promising homegrown youngsters ( Smith Rowe, Saka, Iwobi, Guendouzi, Naitland – Miles, Nketiah) and non- home gown ( Guendouzi, Torreira, Bellerin) BUT are there any top class young centre backs at the club. Great teams / clubs like Barca with Cavi & Inneista do not buy an entire team but homegrow the core and buy say genuine 4 world class others. Rich is right though fans must be patient with Emery. It will take 3-4 more seasons.

Spot on mate, our biggest problem is Centre Backs… That Medley looks promising but we need to spend 70-80 mil on a world class centre half… My preference would be Rafa Varane, but with no Champs League carrot getting someone of that calibre will be almost impossible. So 3-4 seasons with a nice cash injection for players…

Varane will not leave Real for Arsenal. Also, he is injury prone

He looks a great prospect for the future Saka. Can’t remember if he is one these young players Wenger made a bid for some time back. We have a lot of promise on the wings with Nelson looking sharp in Germany. Problem is I’m not sure what the thinking has been affording him out on loan when clearly we have need for such a player now even if he’s 19yrs. What it seems is the decision is made by Mslintat and Emery having just come in wisely did not exercise too much influence on it. Ditto the decision to sign… Read more »

As far as potential wide players is concern, Nicholas Pepe purportedly on the radar looks sharp. There was also Christian Pavon but we don’t know if he may hold on till summer to see if any of the Spanish big 2 may come in with interest. Pepe remains one of few players available not cup tied I believe. At Lyon Houssem Aouar is a tidy player in midfield but may also have potential further forward. They are packed with talent going forward at Lyon with Fekir also still in market albeit probably will command a premium price. But he’s the… Read more »

How tough and long can it have been at 17?