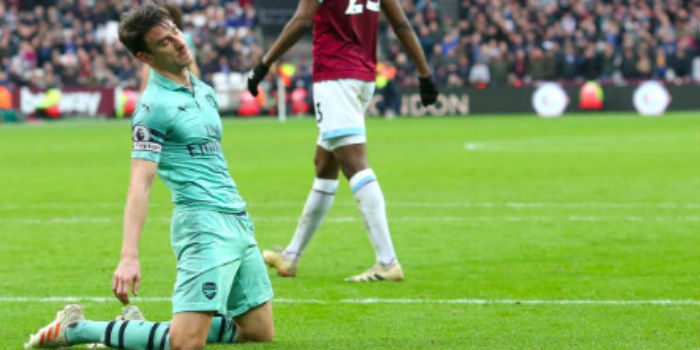 Laurent Koscielny blamed a lack of calm in the final third as West Ham took advantage of a lacklustre performance to win 1-0 at the London Stadium.

Despite a bright start to the game, the Gunners struggled throughout to create chances in attack, falling into a pattern of pointless possession that was reminiscent of the worst performances of last season.

In the end, Declan Rice’s goal, scored three minutes after the break, was enough to condemn us to our fifth Premier League defeat of the season and our third in four away games.

“I think in the final third we needed to keep more calm and not try to find the final ball and to continue to play with movement,” Koscielny told Sky Sports.

“In the second half we didn’t stop but conceded the goal early. We had some chances and we didn’t score. It is difficult to win if you don’t score. We need to keep our ambition and our game. We can come back.

“We needed to be clean with the ball and we weren’t. In football if you give a small chance to your opponent you pay and today we did.

“When you are arriving towards Christmas you know it is a big period and it is hard to compete at the same level.

“We started the new year with a win and we prepared for this game and came here with ambition for three points but we need to keep calm and focused on how we want to play.”

There’s a possibility that we could fall six points adrift of the top four if Chelsea beat Newcastle United this afternoon. We face the Blues next weekend knowing we’ll have to win if we’re to retain an outside chance of finishing in the Champions League places.

“It is a home game against an opponent in the top four,” noted Koscielny. “We know what we need to do. We need to prepare all week for this important team.”

Its difficult to win when you are shyte across the pitch.

Difficult to score when nobody creates chances.

To create chances, we need to buy a world class midfielder. Or do we have one already?

Yes but he’s leaving for juventus

Difficult to win when you only pass to Sokratis, he passes back to Leno, Leno kicks it up the pitch and the other team get possession on an endless cycle.

If your implying koscieleny did that all game then you are very wrong. He was our best ball playing centre back today, in the 1st half in particular he made numerous incisive forward passes into our midfield

It was difficult to watch….?

What about if someone scores an own goal?

Sad times when you have to depend on “Own Goal” as your main striker.

Own Goal did pretty great today, i’d take him as our main striker

To be fair, that seemed to work for Burnley yesterday.

It’s not difficult to win when you don’t score , it’s IMPOSSIBLE , we have too many brain dead players

That was a game of fine margins.. it could have been 3-0.

Where is Owen Goales when you need him?

Lacca and Auba was terrible today, £100mil and create nothing, defense not to blame for that.

No Wingers. We play from flanks where we have absolutely zer0 creative wingers.
How stupid is that?!

Kolasanic had been very good on the left flank. Maitland-Niles on the right flank though, well, let’s just say I don’t think his future is on the wing, he constantly appears out of his depth. I get he’s still a kid but he seems more comfortable in the middle.

I am not saying our strikers performed well but I think a bigger issue is the service they receive from others in the team. Too many passes go backwards.

if only we had a creative number 10 who could unlock defenses. tactical decision is like hearing Wenger say we live in a world….

iwobi is not always great, often times he’s average and while he can have his moments he’s never world class.

But continue not playing ozil. see where that gets us.

Play him and see little or no difference

Then fair enough, emery would be justified. But performances aren’t improving since the honeymoon period of 22 unbeaten games.
After Rob got injured and the papers started telling their tales of injury crisis at the back, teams weren’t as afraid of us anymore and we lost confidence in our selves.

can this trash talkers shut the f up…we were scoring 2’s and 3’s amd still losing forsake.if u dont score atleast u dont concede and gain a point..Our defenders have ball sized brains for sure.

“Koscielny: It is difficult to win if you don’t score”

Please tell me he didn’t actually say that. That’s Michael Owen level stupidity. Of all the fucking people not Kos. Say it isn’t so!

Did anyone else think think, they were going score? Painful afternoon. Now the weekend is screwed.

Looks like Jan is going to be a long one.

Obviously, shortly before or after half time always seems the most likely/easiest time to score against us. I thought they would score even earlier after Mustafi’s stupid foul resulted in the free-kick which, in the end, led to the corner where they scored from because Xhaka was doing Sunday League stuff again…

The stupid foul was because Guendouzi couldn’t control the ball. That foul is the type I expect my center half to make. Mustafi was actually the best player defensively today until he was substituted.

I agree. It is so easy to continue to criticise Mustafi. My reading of the mustafi foul is that the referee should have penalised west ham a second earlier for a foul on Guendouzi. In my view any handling of an opponent is a foul. Its not rugby. The clue is in the name – football. All players are guilty at times. Referees should award free kicks every time. They don’t because it is such a feature of modern football that we have reached the ridiculous situation that TV pundits start discussing the degree of holding/shirt pulling etc. Crazy. If… Read more »

Are you Michael Owen in disguise?

I’d like to know our win-rate for early kick-offs. I have a feeling it’s absolutely shit.

This article reminds me of arseblog’s 2015 article, “The wisdom of Michael Owen”. https://arseblog.news/2015/08/the-wisdom-of-michael-owen/. Can’t believe that Koscielny has gone down to such levels

I was worried about that until I read the bit at the end of the linked article.
A genuine “wisdom of Michael Owen” piece would be a blank page and a short one at that.

Difficult to win when you leak goals like us too. How many clean sheets do we have in the league this season?

There are no ball carrying midfield players something we lack without ozil. Looks like emery likes more of wing play but we have no natural wingers and there has to be an extra body in the box when a cross is being made, a play Ramsey did it perfectly a few seasons ago popping up in the box. The players playing forward do have to realise they will have to go towards the ball than wait for the ball to come towards them. Arsene had a luxury of ball carrying players rosicky, wilshere cazorla, nasri, fabregas. But if wing play… Read more »

The passing in this game was awful due to brilliant defending from both teams. Intensity was great though..
We did it this season as well, against Liverpool and Spurs at home. Something we managed to do under Arsene from time to time too…
It doesn’t feel different at all with Emery.

I agree. As well as the players you mention I would add Walcott. I know the generally held opinion says his passing wasn’t always good I think he was underrated in this regard. Van Persie often benefited from Walcott’s passes and crosses. I also believe Bellerin enjoyed linking with Walcott. (In addition Walcott did manage to score more goals at the Emirates than any other player apart from Van Persie).

Koscielny is being sarcastic to Emery not playing Ozil

It’s difficult to win when you’ve barely kept a clean sheet all season too. I don’t think any Arsenal defender should be be blaming the attackers when our defending is an absoute joke

Kos channeling his inner Michael Owen and stating the obvious.

We need new centre backs this koscielny is old

We need to stop with the constant rotation of players and systems.
It’ impossible for any player to be in form as his position on the pitch and the job he’s asked to do changes from game to game.

We can’t expect players to be consistent when the manager isn’t.