THE LOWDOWN
Arsenal Women travel to Wycombe to take on Reading Women in the WSL on Sunday, fresh from a short international break which did not, at first glance, seem to deplete an injury ravaged team further. The Gunners are now 2nd in the table, albeit with a game in hand over Manchester City. Defeat at home to Chelsea a fortnight ago has damaged the title bid a little, but Arsenal’s fate is in their own hands. If they win all of their games, they will be champions.

That task is easier said than done though and Reading provide very stern opposition more often than not. Montemurro’s side battled out a 0-0 draw in this fixture almost exactly a year ago. The Royals rarely give you an inch, especially on home soil. Arsenal are still missing some key attackers and have lacked fluency since Jordan Nobbs’ cruciate ligament injury in November.

They’ve had the attacking quality, in Vivianne Miedema, to see off the lesser sides, but are playing a long way short of their early season form. That said, Reading have not quite managed to recapture last season’s form, they were beaten 4-0 by Chelsea the last time they played and have also suffered defeats to Birmingham and Liverpool since their last victory 5 games ago.

Arsenal need a result first and foremost, but they also need to try and regain their early season rhythm. With Reading, Manchester United, Liverpool and Yeovil on the horizon, the Gunners will be favourites to win all of those games and they could use some momentum to try and carry them over the line, particularly as the injury situation starts to ease in the next few weeks.

TEAM NEWS
Danielle van de Donk misses this game with a thigh strain. The Dutch international is likely to be out until the middle of February. Beth Mead withdrew from England’s training camp in Qatar last week because of a knee injury obtained in the defeat to Chelsea, but has been in full training this week and should be in contention to play.

Jordan Nobbs (knee), Danielle Carter (knee), Jess Samuelsson (foot), Tabea Kemme (knee) and Viki Schnaderback (knee) on the sidelines. Kemme, Schanderbeck and Carter have stepped up their respective rehabilitations, but are unlikely to feature in February. Arsenal’s academy game against Bristol on Sunday has been called off, so the bench will likely be filled out with U-21 players on this occasion.

As she nears a return from a serious knee injury, @DanielleCarter shares some helpful advice from an @Arsenal team-mate…

…@PetrCech, who today announced he is to retire, is a legend of the game ? #TuesdayThoughts pic.twitter.com/YLixhvr69v

LAST TIME OUT
The Gunners were held to a 0-0 draw in this fixture last season, but earlier in the season, the Gunners made short work of The Royals at Boreham Wood with a resounding 6-0 victory. Vivianne Miedema hit a hat trick that afternoon, with further goals from Beth Mead, Danielle van de Donk and Jordan Nobbs. The identity of three of those goalscorers illustrates why Montemurro’s team are unlikely to repeat that score this time around.

PLAYER TO WATCH
Arsenal’s supply line to Vivianne Miedema has been impeccable this season. Jordan Nobbs sets the tempo with her boundless energy and third person runs, Kim Little makes the play from deep and Danielle van de Donk stands in spaces that pull defenders out of position. Without Nobbs and van de Donk, a large burden falls on Kim Little to play judge, jury and executioner.

The Scot has taken some time to rediscover her rhythm after ten weeks out with a broken leg. But her assist for Miedema against Chelsea provided a shaft of light. Chelsea managed to crowd Little out in the midfield to prevent her from finding Miedema in the manner that she did in the 5-0 victory over Hayes’ side in October.

? @VivianneMiedema's 15th of the season on Sunday equalled @ellsbells89's record for goals in a #FAWSL campaign…

? How many will the @ArsenalWFC ? have by the end of the season? pic.twitter.com/SjyGzMGElk

In the final quarter of the Chelsea defeat, Little began to drift wide in search of pockets of space usually occupied by van de Donk. If Kim can provide Miedema with the bullets, the Dutch striker will find the net. But Reading will know they can concentrate a lot of resource on Little without her partners in crime available. If the Scot can overcome this obstacle, Arsenal should win. 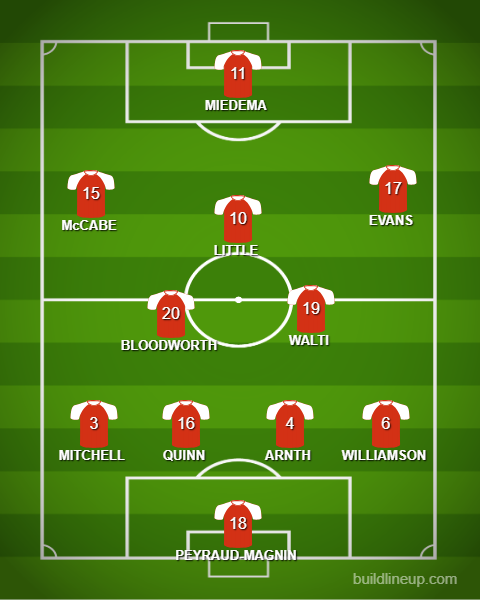 HOW TO CATCH THE GAME
The match takes place at Wycombe Wanderers’ Adams Park on Sunday, with the match kicking off at 1230pm. Tickets are available online or at the gate at £6 adults and £3 concessions. Alternatively, the match is being shown live on BBC Online and the Red Button.

You won't want to miss this one…

MATCH TRIVIA
– If Vivianne Miedema scores on Sunday, she will break the WSL goal scoring record for a season. She is currently equal to Ellen White’s 2016 total of 15 goals.
– Miedema has 15 goals in 11 WSL games this season. Last season she played a total of 11 WSL games, scoring 4 times.
– Chelsea have conceded 6 goals in the WSL this season- all of them to Arsenal.
– Reading have a total of 5 ex-Arsenal players in their squad; Fara Williams, Lauren Bruton, Gemma Davison, Jo Potter and Jade Bailey, who joined on loan from Chelsea in the January window.

The WSL stats are in the inbox – but this one in particular is staggering pic.twitter.com/JkzFpvYI4u

COMING UP
We’ll have exclusive player reaction on the site shortly after the game, as well as the usual weekly round up on Monday. Our January feature interview will focus on one of the squad’s off pitch charity efforts, that will go up on Wednesday afternoon. We’ll also have a full match preview for next weekend’s FA Cup tie against fourth tier Crawley Wasps on Friday afternoon too.

Please excuse my ignorance on this one, but how many games are played in the WSL? I am guessing it is 20 matched based on the fact that there are 11 teams?

Correct, it is just that the odd number of teams leads to the peculiar situation where one team has to sit out each round of games as they have no opponents which is why you often find teams have games in hand especially if they are on cup runs too like the Gunners!