Well, that was bad.

I dread these early kickoffs, first in general they seem to be lower quality matches than the typical Premier League match and second it involves setting my alarm for 4:20 am and if the match doesn’t go well it leads to me questioning my life choices. That isn’t fun and today’s performance made things even worse.

Arsenal are currently in 5th place, 3 points (likely 6 by the time this is published as Chelsea are beating Newcastle currently) off of 4th place, on pace for just under 71 points. Dropping 3 points today puts a the hopes of earning a top four spot through the League on life support and with Manchester United freed of the cancer of Jose Mourinho it isn’t out of the question that Arsenal slip into a battle to hold on to fifth place.

It was always going to be a tough year with Arsene Wenger leaving, but I had really hoped that the top four fight would survive into the Spring, and that sure doesn’t look likely.

West Ham 1-0 Arsenal: By the graphs 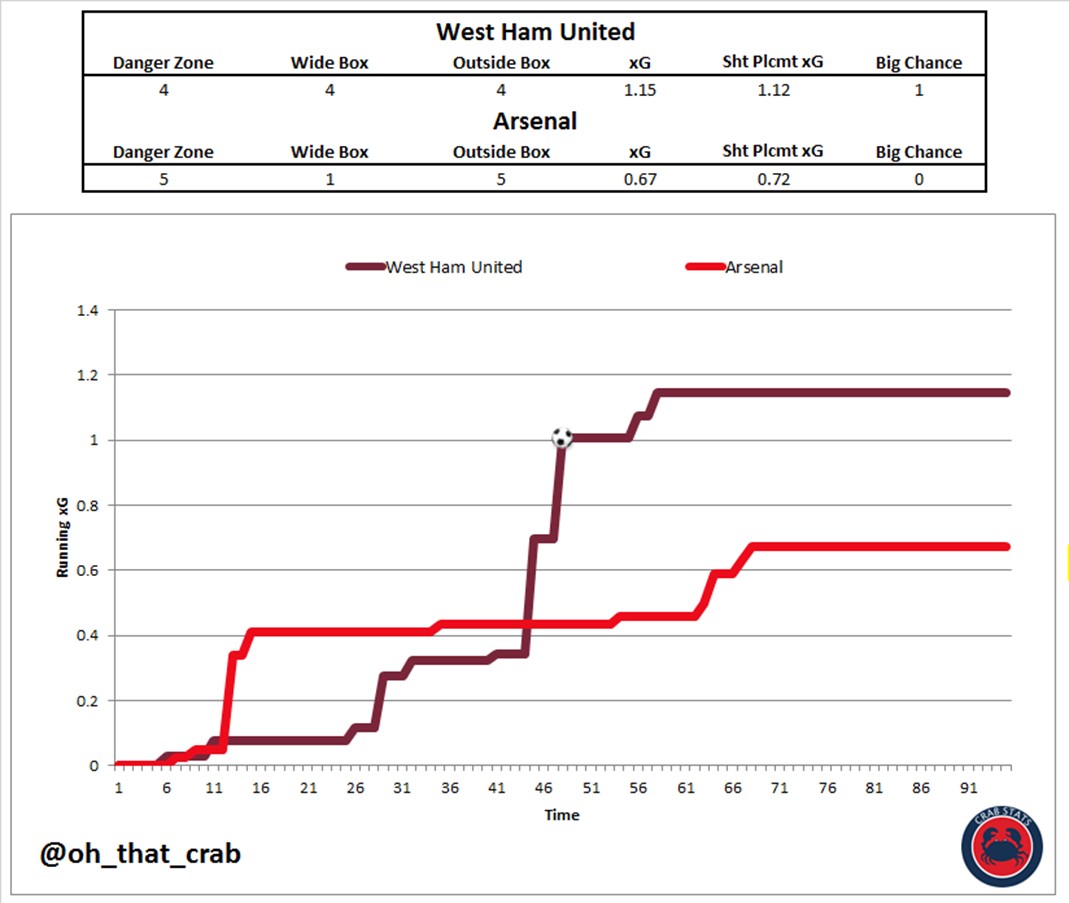 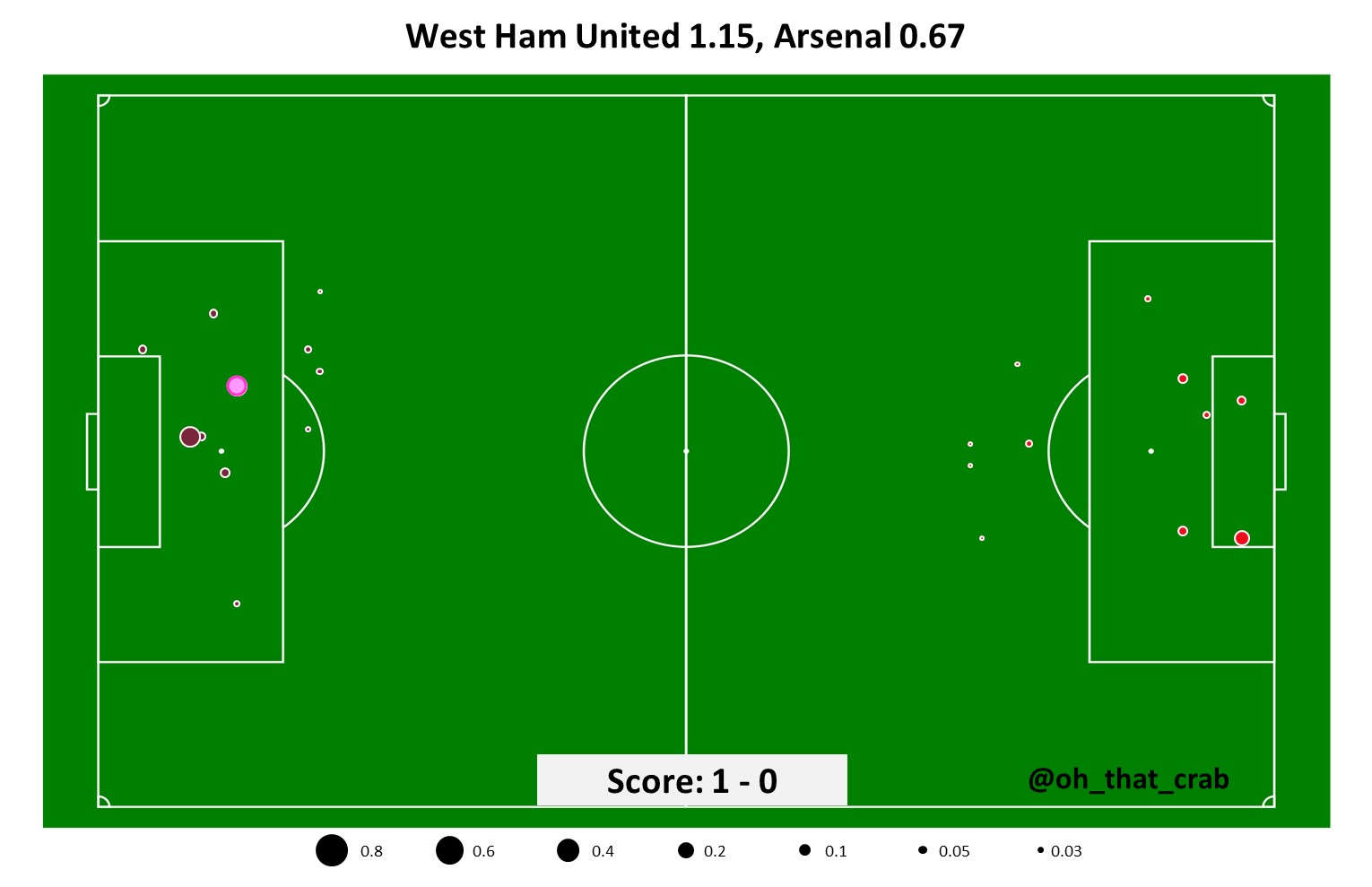 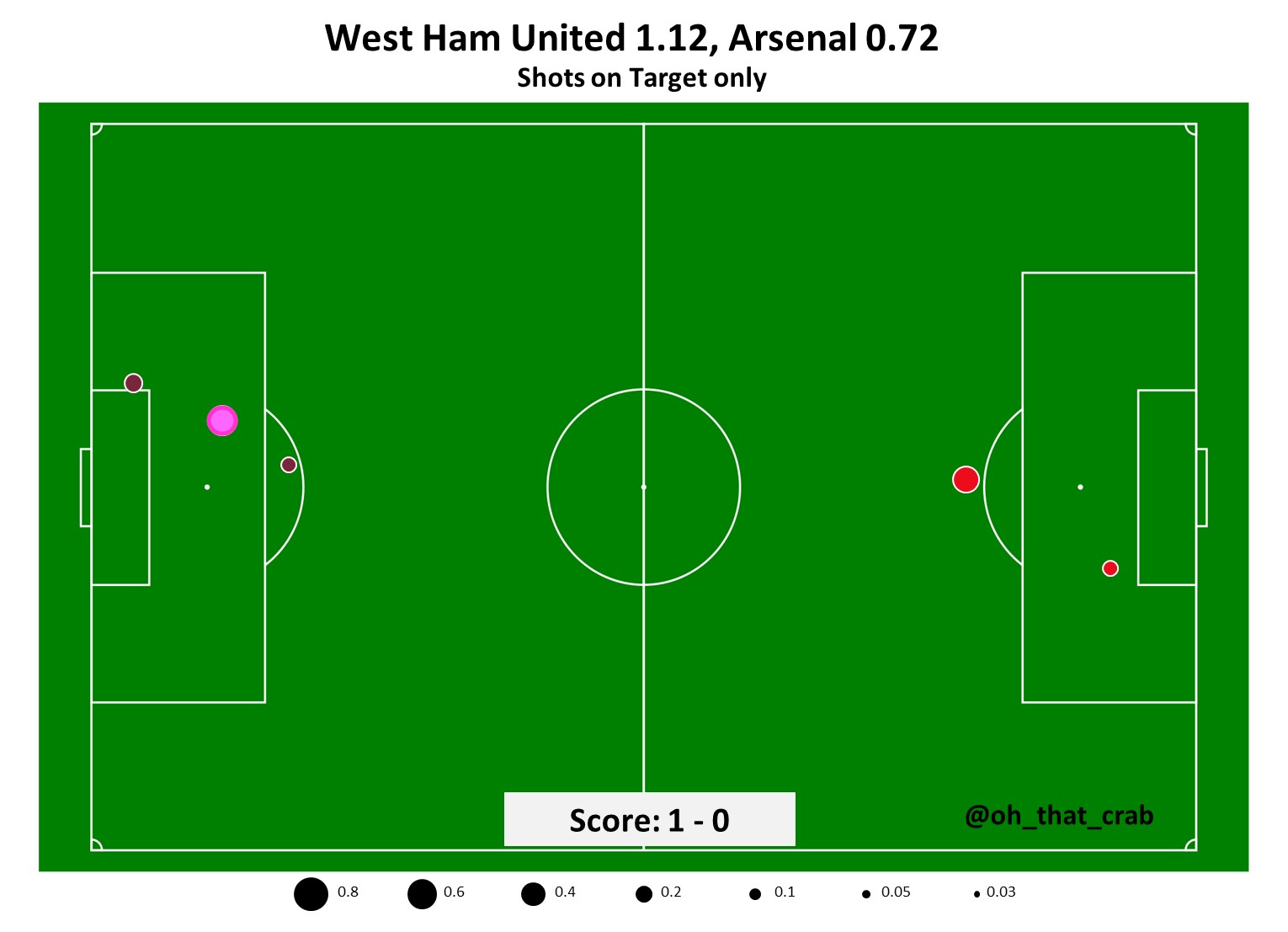 Simulated Match Result Based on the Shots 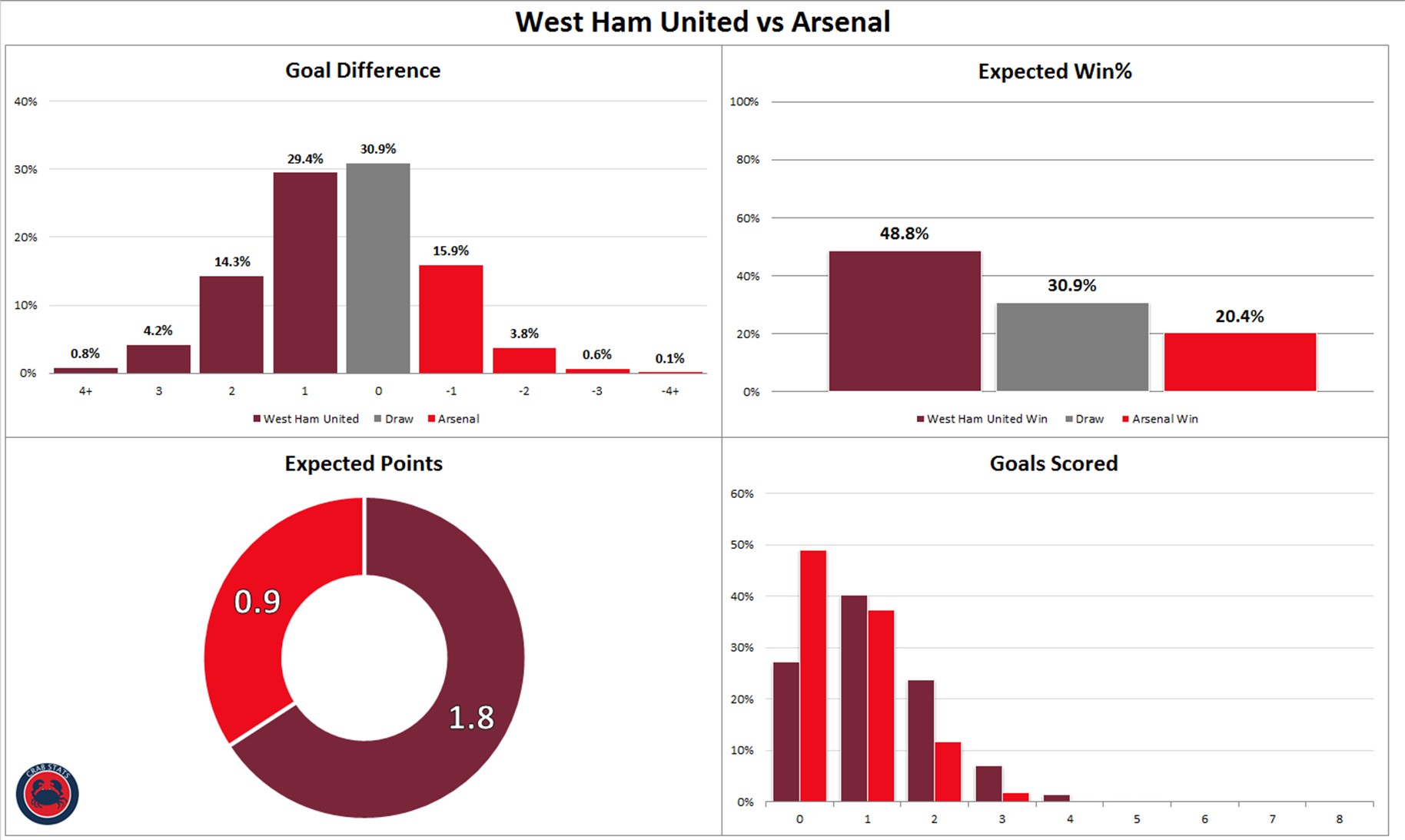 West Ham 1-0 Arsenal: By the numbers

0.7 – Arsenal’s xG created in this match, the second lowest total for a match this season (behind City at home) and the third lowest total over the last two seasons (at City last season).

11 – Total shots for Arsenal in this match, the 5th lowest total for a League match this season.

5 – Shots Arsenal took in the 41+ minutes after falling behind.

10 – Touches in the box for the Arsenal front three, lead by Alexandre Lacazette with 6

20 – Touches in the box for Arsenal as a team

72 – Touches in the final third for the Arsenal front three, lead by Alex Iwobi with 33

19 – Touches in the box for the West Ham front four, lead by Felipe Anderson with 8

99 – Touches in the final third for the West Ham front four, lead by Felipe Anderson with 41

I think that most fans can understand that Arsenal might not be a great defensive team. Most reasonable people can look at the roster and see that there are quite a few needed upgrades that will need to be taken care of over the next few transfer windows. What I think that most people will have trouble with, and what I really have trouble with is how bad Arsenal have been at creating shots let alone good scoring chances.

Arsenal spent over 40 minutes behind in this match and still really struggled to create much and then created zero over the last 20+ minutes of the match. Some credit needs to go to West Ham who played well defensively but there is plenty of blame to go around for the Arsenal players and the manager.

This is going to be a long running story, especially with Arsenal’s highest paid player left out of the match day squad. This has also been a long running concern, even when Arsenal were winning matches, they were doing it with mediocre underlying statistics that suggested that things were not going as well as they looked from the points collected.

9.2 – Chances created for Arsenal this season, down from 11.7 last season.

1.3 – Chances created from the zone right outside the “D” of the 18 yard box last season from open play.

0.8 – Chances created from the zone right outside the “D” of the 18 yard box this season from open play.

One of the more notable changes this season is that Arsenal are focusing their creativity into the wide areas and half spaces. The number of cutback attempts have gone up significantly under Emery (not that Arsene Wenger’s teams didn’t attack these spaces as well). Arsenal have created the second most chances from the deep half spaces this season, just behind Manchester City.

The issue is that this increase has come with a correspondingly larger drop from areas just outside the 18 yard box (aka the Mesut Özil area) and especially in the central location where very dangerous passes can be played. If Arsenal aren’t winning, and not playing their highest paid player these kinds of issues are hard to ignore and are worrying.

This wasn’t the greatest defensive match for Laurent Koscielny but this did show to me how much Arsenal have missed his passing from center back. On a day that Arsenal really struggled connecting midfield and the final third, Koscielny was one of the few players for Arsenal who could progress the ball consistently. As Arsenal start looking for long term center back replacements, a player with the passing skills of Koscielny will be very important.

Sources: Opta via WhoScored, StatsZone, and my own database

Thank you for this enlightening post. It shows just what Mesut Ozil brings to the pitch and why it is extremely foolish of Unai Emery to shut him out citing “tactical reasons”. Unless shutting out Ozil is part of their own master plan – and it may well be – the authorities at Arsenal need to have very strong words with their manager.

Ozil wouldn’t have changed anything like he hasn’t changed anything for the past 2 and a half years. The manager needs time and trust from fans and the board. The attacking options from the bench were poor yesterday, since Mikhi has been injured we lack bite and composure in transition.

The only thing that makes sense for me is if Ozil is partly on a performance-based pay packet, and by him not playing we don’t have to pay him as much. Otherwise, leaving a £350k/week player on the bench is a ridiculous thing to do that, honestly, there is no justifiable reason for.

‘Leaving him on the bench’ considering him only good enough for Plan B would have been considered ridiculous.
Leaving him out of the matchday squad altogether is another level altogether.

You may be right. Otherwise if you want to sell him, you need to play to put him back in the window as Ozil s stock is rather low at the moment. By UE answer its clear that he’s not injured.

Of course he’s not on performance related pay – no agent would agree to that and how would you measure it. You don’t pick someone because they are earning £350K, you pick someone if they deserve to be in the team. Ozil doesn’t deserve to be in the team because he is a parasite. Unless you work hard and give 100% you cheat yourself, your teammates and the fans. That is what Ozil does every game. The prerequisite of a footballer is to give your all and no one should accept that a talented player doesn’t have to. How hard… Read more »

Funny, all the players speak well of him and what he brings to the team. Where is your evidence for all of your accusations of him being a parasite or not working hard?

Can’t believe you put Kane in the same breath as Messi and Ronaldo.

That’s just about the work ethic.

He is not a football player, it is a contact sport and he refuses contact, people are blinded by the fact he came from real Madrid and does a Hollywood pass every 5 games. Let the manager do his job. He has correctly identified Ozil and Ramsey as surplus of requirement.

Yeah, we did a bang up job without them at West Ham.

The game plan is tofocus the play in areas that Mesut unfortunately doesn’t play in. Our style just doesn’t go through the areas he frequents the most. Tried playing him wide to get him more involved but he is not a wide player, and his stats took a nose dive. Mesut is an amazing player but in Unai’s system, a number 10 is redundant. Maybe the style is wrong and doesn’t get the most out of our players, but Emery can’t change to a method he doesn’t know. So he is either the right fit or not, and as a… Read more »

So Emery only knows one method of coaching. Ok, now, let’s fight for the 6th place.

If the dude has played Banega, he can accommodate a number 10 in his team.

In possession, Ozil can easily do what Ramsey shown yesterday.

The fact that we came to rely on Guendouzi long shots is just absurd to me. The boy wasn’t tracking back as well.

Emery must find a better balance between his methods and our squad to reach an acceptable level of performance.

The “boy”was everywhere. DOn’t let your emotion crowd your judgement. he has some Steven Gerrard in him!

*cloud but crowd works as well

Run araaaahnd a bit, eh? Everywhere and yet nowhere. We had no control of the midfield. All action, no plan doesn’t control a match. It will come with him, but he’s raw yet.

The reason we’re a more composed and controlled midfield with Xhaka / Torreira is because they are better at smart positioning and managing tempo.

The lack of shots generally is a concern, the fact that we can be losing a game and not even try a shot is a major worry. It does seem our whole play idea is for cutbacks because no-one is capable of slick passing into the box. This in turn leads to a lack of desire to make those darts into the box which means – vicious circle – there is no-one to hit the short pass to. With results like these, there is no doubt that Ozil must play – it can’t be any worse even if he doesn’t… Read more »

Emery is Wenger in disguise. His pass and pass is the same as the fm.
When confronted by a wall of defenders,a quick break through can be fatal .It
has happened so many times before.
Me thinks the gunners better not qualify for the cl. Its just to fill the coffers.
Gooner fans are paying the highest priced tickets and shd vote with their feet
until the US owner knows football is not a business but a game where trophies
are given to winners.

Arsenal are taking a long time to shoot similar to Wenger’s time.The gunners like to play apossession game based on patience. This has back fired because it gives defences time to regroup and all gaps in front of goal are sealed 98%.
Emery may have won the Europa league but the epl is a different beast.
For starters epl refs will look kindly on robust tackles but not the cl and ul refs.
I don’t know why when the gunner players are tackled vigorousl y why cant
we dish out similar tackles.You must fire with fire to win.

He leaving ozil out for tactical reason on shows e is tactically bereft of ideas. Even Mourinho will never do such. Emery should make hay while the sun shines.

We are but 2 points better than this stage last season.

Sell Ozil sure but who will buy him? And pay 350K a week??? I feel a lot of this is manufactured by people who want to believe this well happen. We have 3 players who basically perform similar function. Ozil, Ramsey Mhki all do the same task. Meanwhile Iwobi (with Nelson inexplicably loaned out) attracts criticism from certain people but practically is the only player who can come close to beating opponents on one on ones and was one of our busier players on the pitch. More likely we would sell Ramsey although considering his age and Brexit potential issues,… Read more »