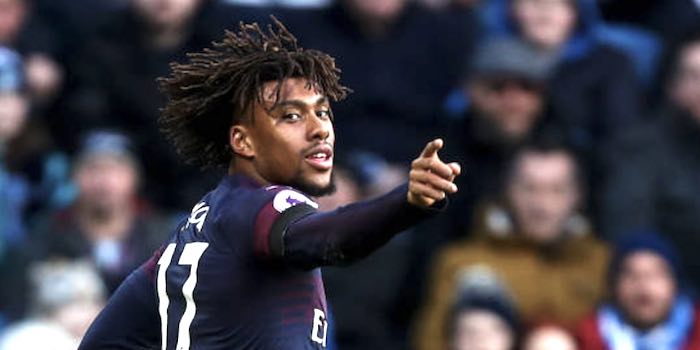 Alex Iwobi says that the Gunners second goal against Huddersfield was the consequence of training ground drills in which Unai Emery looks for his team to transition quickly in the opposition half.

Iwobi picked up a pass from Laurent Koscielny, fed Henrikh Mkhitaryan in space before he in turn picked out Ainsley Maitland-Niles whose low, hard cross was turned into the back of the net by Alexandre Lacazette for his 12th goal of the campaign.

Speaking afterwards, the 22 year old was quick to credit the head coach for the work they’ve been doing.

“We’ve been working a lot on transitioning when we get the ball, to counter-attack and attack with speed,” he said.

“So when the goal went in it was a great team move and I was also happy for Laca to get the goal as well.”

Iwobi also had words of encouragement for Maitland-Niles who had an up and down game, but the Nigerian is hopeful the assist will boost his confidence.

“Ainsley did well today,” he said. “He’s an attacking threat. You can see that he can get up and down, he’s got a lot of stamina.

“It’ll do him a lot of good and hopefully he continues this run of form.”

For more on Iwobi, Maitland-Niles, and Huddersfield check out the new Arsecast Extra ?

Glad for the win, hopefully we can use it and others to play less conservatively and more freely (not 3 at the back).

i hope they continue working to improve those drills because even if this one instance of it came off, it is still quite evident the players aren’t well drilled. movements and automatism is kinda lacking when we counter more often than not.

The manager has a style of play all his teams follow. Our players, through injury and age, and perhaps because it is a big adjustment from how we were playing under Wenger, aren’t quite up to it, on the whole. They rush their passes and miss them on a regular basis, turning the ball over on 90% of our attacks. Most often its the second pass after we have got the ball back under our control. On the attack most other PL teams, including “only” Huddersfield, seem to flow against us, their one-twos work, their flick-ons go where they are… Read more »

I’ve just had a look at our fixtures: can’t see us finishing top four if our dismal away form continues.

Question: should Emery forget about the PL and just put all his eggs in the EL basket?

He will most likely keep playing for both. Dangerous to put all your eggs in one basket.

Though we only have one top six side left to play home or away. My own feeling is that, barring Spurs totally Spursing it up, a top four finish is dependent on ManU’s form until the end of the season.

Scratch that – I just realise we also have to play ManUre. Though it’s at the Emirates. So that could be a bit of a crunch match. I’m also concerned that our lack of clean sheets is going to affect our goal difference. I have a feeling it might be that close.

It’s popular to bash Fatgooner but he has a point. That point about us only having to play 2 ‘Big 6’ teams is a bit of a red herring.

We’ve still got to go to Wolves, Leicester, Watford, Burnley and Everton, none of which seem particularly palatable at this point. If we can’t keep a clean sheet at Huddersfield I don’t fancy our chances of winning every one of those (realistically we need to be aiming for as much to get top 4).

Exactly. Our recent away form stinks. The home games should be fruitful, and I have the feeling we’ll beat Manure, but can’t see us getting much away.

The chavs are struggling but United are more consistent. That’s why we’ll finish no higher than 5th

Probably end up fifth given the form MUFC are in. Looking at investments and “on the paper” our squad shouldn´t be in the top four. My assessment is that we have the sixth strongest squad of the so called top six in PL

United form will not last forever.

We need to get ourselves a good form so we can ignore Man U’s form.

People said that in the 1990-91 season. Lasted a fair while that time.

Things change so quicky. A few weeks back everyone was saying Liverpool will run away with the title and City had thrown it away, what happened next? Man Utd were written off on top 4, where are they now? Chelsea were considered title challengers with their amazing start, where are they now? At the moment United look like world beaters, don’t bet on them keeping that form throughout the season. A lot could happen. Spurs could still crumble, United as well. We could go on a run. Chelsea could rise up. It’s all there to play for. On our part… Read more »

We’d be absolutely brilliant if only we could sack Mourinho and get Bergkamp in.

There’s a considerable amount of luck involved in ManU’s run. They’re still playing MourinhoBall for lengthy periods of every game. Only difference is that it is mixed with a bit of attacking freedom and high pressing.
At any rate, they’re luck will run out.

That’s a lot of eggs to put in a very patchy basket. The PL is our safest route in and should be our number 1 priority.

I know the game wasn’t the greatest, but we only managed a 1-0 at home against them & a 1-0 away there last season… So with all the players who were missing I was happy!
Seeing as we’re out of the FA cup now, I hope we field a strong team on Thursday (& next thursday) COYG

How about practicing shooting and scoring on one on one situations???

I expect they do.

Not enough – Iwobi is the worst shot on goal I’ve seen.

He’s still learning. This is a season for giving him the chance to develop. He is obviously trying to do that.

I think crashing out of the FA cup and carabao cup is a blessing in disguise.
It will give our players some much need rest and with Miki, Xhaka, Auba, Denis Suarez, Ramsey, Sokratis all coming back or soon to come back we will have a full strength squad come march and April. Added bonus will be Welb’s return towards the tail end of the season.

I’m so glad that there is finally someone talking with optimism.

Really looking forward to Welbz coming back! He seems exactly the sort of hard-working player to link the defence and attack that we could really do with. Hope he can get a good run of games later on in the season. Would give Iwobi a break too, so he can keep improving without the bullshit abuse he seems to be getting. I will never understand why people are so hard on him, he’s Arsenal through and through and works his socks off to support the teams balance.

Leave the kids alone! Iwobi is one of our outstanding performer this year. Only 22 ! His goal was gutsy and technically hard to execute. Yes he can improve but give him space and your support. Ozil is not coming back lets support the team that are on the edge of delivering what was promised: CHAMPIONS LEAGUE FOOTBALL. COYG

Slightly off topic and maybe controversial, but Andrew talked in today’s blog about the personal abuse and criticism levelled at Iwobi and AMN recently. Does anyone think this is influenced by race? I don’t remember any of the white English youngsters having the same level of abuse/criticism when they were breaking into the team (like Holding, Chambers and Jenko). They have all struggled for form at times and been criticised (which is normal and perfectly fine) but as far as I remember it was never over the top or too personal and there was an acceptance that young players need… Read more »

Wilshire, Ramsey, Jenks. Most of our young players cop it at some stage. We have some rubbish supporters in the mix.

We are not Chelsea, the answer is no. Annoys me you’re mind goes there tbh

Not controversial at all…we know

Iwobi scored a cracker and gets abuse!!! Were they booing the fact that he got substituted? That is the only logical reason for any chuntering!!!

The abuse directed at Iwobi and AMN does not bear much scrutiny. These are young players and clearly they make mistakes. But as I mentioned before everything that is GOOD in our attack is coming out from our left at the moment. No surprise Iwobi was involved in two key passes leading to goals in previous 2 matches plus the goal (ironically from right) last match. So what’s the complain? He’s about the ONLY natural wide player we have at the moment able to engage and take in opponents, pull them out of position. AMN made his fair share of… Read more »

That bit about switching him from one side to the other is a bit of fuzzy logic.

I don’t care no more of the good games beautiful football. What I care is the 3 points. Play bad but get the full points, we don’t need possession but the points that can take u to champions league.

All hatters off Iwobi should leave Arsenal, the young player always gave his best and at the city game he was played out of position to help Lichtsteiner which failed but he tried his best.so many strickers shots off target so why criticizing Iwobi? Support all the young players give them chance they will improve look at Dortmund with Sancho.most of the goals Arsenal score is from the left for the combination of Kolasinac and Iwobi. Arsenal is more dangerous on left than right. I understand the coach and watch what Arsenal will do on Sunday going to be attacking… Read more »

Said it on here a couple of time but the stick Iwobi (and to a certain extent, AMN) get is totally out of order for academy products of their age. It’s embarrassing as an Arsenal fan to see the abuse that’s thrown their way, often times on here but now apparently in the stands. Hopefully they can rise above it and kick on under Emery’s guidance.

There’s been a massive drop in class amongst Gooners. Mind you, I think its a society thing and not just happening to us.

Don’t worry though, Global Warming will make PL football obsolete in a few years when the seas are unsailable, aircraft fall from the stormy skies regularly, and the internet and inter-continental TV stops working because of all the atmospheric upheaval.

Oh, and the Emirates is only 31 metres above sea level, but Central London will already be awash years before the sea reaches it.

Chelsea v Fulham in the waterpolo final. Hazard will still be diving.