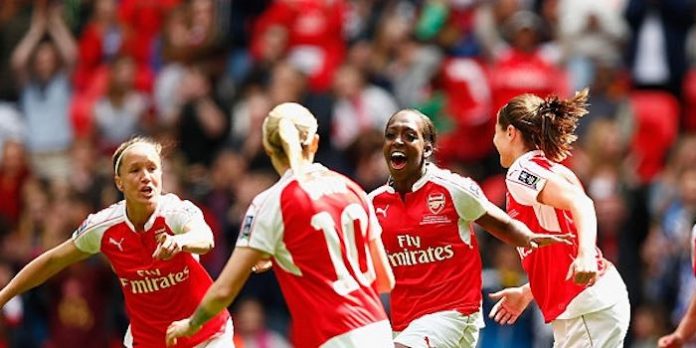 Arsenal Women have been handed a tough away tie at Chelsea in the 5th Round of the Women’s FA Cup. Montemurro’s side will travel to Kingsmeadow on February 17th in a repeat of last year’s final at Wembley, which Chelsea won 3-1. The Gunners defeated the Blues in the 2016 final, however.

Arsenal vanquished 4th tier Crawley Wasps on Sunday with a consummate 4-0 win in the 4th Round, while Chelsea won 2-0 at Everton. Chelsea and Arsenal are both involved in the Conti Cup semi-finals this week, with Emma Hayes’ side taking on Manchester City on Wednesday, before Arsenal face Manchester United on Thursday evening at Boreham Wood.

The Gunners thrashed Chelsea 5-0 at Kingsmeadow when the teams met in the WSL back in October, a result that caused ripples throughout the division. It is highly unlikely that such a score can be repeated with Chelsea in far superior form now, having defeated Arsenal at Boreham Wood just over a fortnight ago.

We’ll have full coverage of the cup tie on Arseblog News with the usual full match preview and player reaction after the game.

This is very annoying. I would love a tie like this but much prefer it a round or two later – none of our currently injured players will be back and I worry that the match could derail our season if – win or lose – they kick more of our players into the injury room and we have no experienced replacements.

Sorry to be such a wet blanket. On a football level I would feel quite confident.

I agree with you mate. This is a 5th round replay of last season’s final. I’d prefer to leave this to a semi, or get lucky and have a Birmingham or Everton knock them out and not have to face them at all.

Could have been an easier tie but to win the cup you have to play the top teams somewhere along the line.
If you consider the two WSL meetings this season we are winning 3 – 0 and those 3 goals were scored away from home!