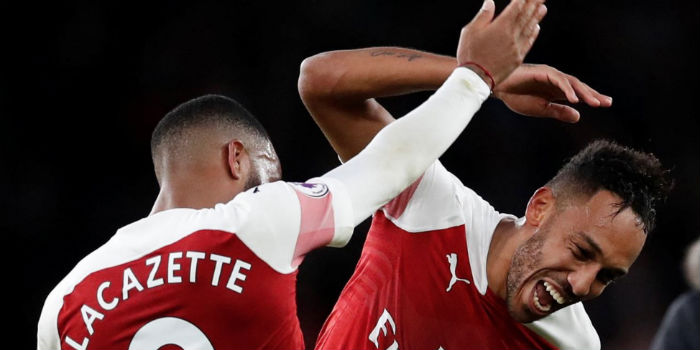 Pierre-Emerick Aubameyang says a shared vision about the way football should be played has been the foundation of his friendship with Alex Lacazette.

Arsene Wenger broke Arsenal’s transfer record in two consecutive transfer windows to bring the forwards together and they’ve gone on to strike up a close relationship both on and off the pitch in the last 12 months.

Having spent the early days of their careers on either side of the fierce Saint Etienne-Lyon rivalry, the relationship wasn’t one Auba was expecting when he arrived from Borussia Dortmund.

“We were rivals before in France, I was not expecting for him to be my friend, but today is different,” he told Sky Sports.

“At first when I came here, he gave me a lot of confidence, because we spoke straight.

“We have the same vision about football, which is a good point between us, and that’s the point that started this friendship.

“When one comes to the ball, the other goes deep. It’s about filling in. You lift your head up and see he is going into space, it’s about feeling as well. If we have to give the ball to a guy in better space, you have to give him the ball. That’s what happens between us.”

Both Aubameyang and Lacazette have netted 28 times for Arsenal with the former doing so in 25 fewer matches at a rate of a goal every 123 minutes. They’ve been jostling for the right to lead the line, although both have also proved themselves capable of being dangerous from a wider position.

While Aubameyang insists he’ll play wherever he’s asked, he insists that being up top in a central position is his preference.

“My favourite role is playing striker, in front,” he added. “I also like playing on the wing, but I think my best position is striker.

“I like to play with two up front, it’s nice because you can do some combinations with the other strikers.

“If the coach needs me on the right or on the left, it doesn’t matter, I go and I fight for the team, it’s no problem, it’s about feeling as well.

“If we have to give the ball to a guy in better space, you have to give him the ball. That’s what happens between us.”

This was really great to read about. I’m even happier with Aubameyang after reading that

What is the vision Auba? Is it to score lots and lots of goals for Arsenal. I like the vision. Very much.

I love Laca’s ability on and off the ball but I’m not a fan of having Auba out wide. Yes, he still manages to pop up with the goals, but he looks far more comfortable playing down the middle when he’s not involved in the build up. Hopefully Emery will have the link up in the attacking phase sorted soon, because I don’t think we’re completely playing to his strengths. We’ll need the boys to be calm in front of goal tomorrow and put their chances away. We waited a long time for a clinical striker and now I’d say… Read more »

this ! i still remember the days of giroud-sanogo..

Playing 2 midfielders against top PL teams is a recipe for disaster.

Lemme rephrase, playing only 2 central midfielders vs top 6 is not a good idea, especially if you want to not concede a lot of goals.
Best form of defending is controlling the match in midfield. Most teams play 3 CMs for a good reason.

It’s a diamond, Bro. The formation used against Chelsea at the Emirates this season. It’s not just 2 midfielders.

2 midfielders is a disaster but look we have four keepers

One man, one goal, one mission. One heart, one soul, just one solution… Just me that heard this from the headline?

So much for Auba having an attitude problem… I wonder what went wrong at Dortmund? Was it all down to Tuchel?

Emery in his press conference yesterday reiterated his desire for some wingers, he can’t have made his requirements anymore clear to the boardroom. Aubameyang isn’t a wide player, he’s got fantastic movement and he’s explosive over the first few yards, but against better opposition it unbalances us with him being out there. And when you play Ozil+Aubameyang together, your essentially playing with 2 impact players who go missing more large parts of the game. I can see Emery rotating Aubameyang+Lacazette for the rest of the season, particularly away from home, and he’ll go with two from Suarez, Iwobi, Mkhitaryan in… Read more »

Arsenal have no attacking problems with these two strikers in their side, Auba⚽Laca striking partnership in 4-4-2 diamond formation will be great.

Emery has done great job with this very unbalanced team till now.

Sorry, but i think our defense has improved over time before these injuries..perhaps from being weak to average..

We need both of Torriera-Xhaka, or Torriera-Guendouzi, or Xhaka-Guendouzi, in the midfield base more than anything. That is one place we’ve found a solution to after a long time, and I think we should stick to it. That also gives us the option of using a classic 4-4-2, with both Auba and Laca in top form, and since we now have two proper wide players in Iwobi and Suarez. This conundrum is also made slightly easier with Ozil’s bad current form, and Emery preferring the work rate of certain other players more than Ozil’s creativity in the middle. So all… Read more »

They certainly shared the same vision while paintballing! Shooting UE from about 5 yards!! Funny listening to UE talking about it on Soccer AM!
I love these guys… We’re so fortunate to have them both. I hope they both score tomorrow… COYG

The have respect for each other as professionals, which is a good thing.

The bromance is good for us but we need better midfield and defence to take advantage. Can we please sign Nabil Fekir in the summer?