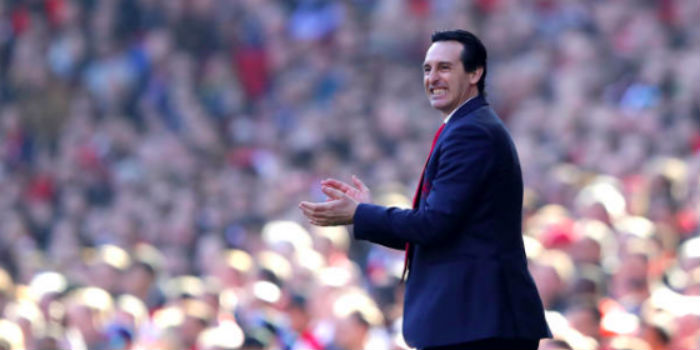 Unai Emery says squad rotation will be important this week as Arsenal look to build on their 2-0 win over Southampton with further positive results over Bournemouth and Sp*rs.

The Spaniard made six changes from the side that beat BATE Borisov 3-0 in the Europa League on Thursday but that didn’t upset his side’s rhythm as they comfortably defeated the Saints courtesy of first half strikes from Alex Lacazette and Henrikh Mkhitaryan.

After the game, the boss admitted he was pleased his side had climbed to fourth in the Premier League, but he made clear that his squad will have to work as a collective if the are to secure a Champions League place.

“For us it’s positive, but it’s not changing our idea or our way,” Emery told his post-game press conference.

“(We are taking things) game by game and Wednesday we want another three important points against Bournemouth.

“I think we can use these moments and different players to get good paces and fresh players with energy and quality.

“We need the mix to reserve some players for some matches, because we are going to play a lot of matches.

“We started Thursday, then today, Wednesday and after Saturday, so it’s important to play with a big performance like today when we can change some players in the first XI.”

He added: “We have the habit to play a lot of matches in one week. I think today I am happy because I said to them, Thursday I was very proud of them after how they worked in a very difficult match for the result.

“Also it was a dangerous match with the result of the first leg losing 1-0. Today we decided to do some changes in the squad and it’s very important to carry on with our intensity and performance with different players.

“We need to be together and we can feel stronger with every player, and the possibility of using different players in different matches with the intensity that we want to play.”

While the Europa League represents another viable route back to European football’s top table, the boss made clear that the 11 remaining Premier League games will continue to be a priority.

“For us the first competition is the Premier League because it’s giving us the possibility to be consistent,” he said.

“It’s the first target for us, but also the Europa League. The Premier League is giving us consistency and at the moment I think we are feeling strong at home.

“Away in the last match we won away at Huddersfield, but I think we need more consistency away. We know that.”

yen
Reply to  Stuart B

I’m so happy to witness that. Somehow the table is turning & we’re not the ones producing the most banter content!

That was just utterly absurd.

Adrian
Reply to  Stuart B

I love what is happening to them as rivals but as a football fan, it was disgusting. It is disrespectful to manager and now days, players have more power than managers.
End of the day, Sarri might be sacked and it will boost players position.

It was a weird situation, I’m pretty sure the ref could have done more to manage the situation

If Tots slip-up against Chelsea and we win against Bournemouth and the Tots, we would have cut their 10 point lead down to 2 (or even 1)!

Chelsea?After what just happened? Nah..even for their level of bottling that’s just too much.

Fully agree. However from our perspective, it would be good. It’s a derby Ofcourse, it would be ideal, if there are some handbags, a red card or two for each of the team.

I believe these next two matches are critical to a top 4 run for us. We need both wins. COYG!

If he’s fit and looking good in training, I’d give Jenko a chance.

We have some massive games coming up next, so Bournemouth at home might be as good as it gets.

Shows when Emery would prefer the security of Mustafi at Rback than playing Jenkinson. Jenko should be sold but no one wants him.

I know his game time this season was very limited, yet when he played – even if he didn’t set the world alight – I don’t remember him putting a foot wrong.

I’m also not saying he should be a starter from now on, but playing him in this fixture would allow us to rest other players.

On Saturday, it’s Mustafi at RB for me.

Emery put Mustafi at RB because Jenks wasn’t available! If Jenks had been on the bench I’m sure he would have gone in.

If jenko can’t even get in on Huddersfield what’s the odds of a “tough” Bournemouth?

Seems to me Unai figured out how to utilize Ozil and Ramsey’s magic wands to perfection.

Very optimistic there lol but I wouldn’t be surprised if Mhki was that missing link.

Man, what was that from Kepa in the EFL final! I think this is a defining moment of the effects of player power in today’s football. If that was an Arsenal goalie, I would have never expected to see them again in the red and white. As much as I hate Chelsea, and give two fucks about Sarri, I felt bad for that shit.

The manager’s situation is so bad in the EPL.

Especially, the media is circling around Sarri, very much like in the wild, see a prey about to collapse, ready to dine.

It’s these kind that Wenger fought all his time in the EPL, while the same media were eating out of Fergi’s hand!

Look at how many fans are routinely on here calling for Emery to be sacked less than 1 season in for not playing their favorite player or for not playing open attacking football with a trainwreck of a defense (some due to injuries, some down to players not being good enough).

We’ve reached an absurd level of impatience with managers as fans & with players understanding it’s cheaper to hire a new manager than replace a squad.

Yes you can tell when a manager isn’t good enough before 1 season. You don’t need some pre requisite 2 years to prove yourself

You mean like sir Alex who was in genuine danger of being fired at Man U in the early years? If the guy is genuinely out of his depth like Henry at Monaco then yes. Emery has us in 4th after not even being competitive lady year. Stupid to say you already know on him

Wrong, Sir Alex Ferguson was almost fired at Man u and also Anthonio Conte won the EPL in his first season but got the sacked following season

Thankfully the Arsenal board are not too stupid to haul off managers based on fan sentiment. Emery will see his tenure through and rightfully so.

It’s surprising that Sarri totally excused the player in his post-match interview, sayimg it was all just a misunderstanding as Kepa wasn’t injured and didn’t have cramp. I guess he wants to defuse the situation publicly, but it just undermines his authority more. It’s such a difficult anf humiliating situation for Sarri, I feel sorry for him.

My guess is that Kepa was faking his injury to wind down time, and that’s why he was so reluctant to come off. It’s obviously still inexcusable, though.

Or Sarri wanted Cabellero on for the penalty shoot-out as that’s what he is particularly good at….. but Kepa refused to be subbed. In any event inexcusable from Kepa.

Absolutely disgraceful and disrespectful to his manager and club.

Hopefully they will come apart at the seams. That would be one less challenger for top4 (and europa)

Also potentially with 11 matches to play for we have a good chance of catching Spurts to third. They have to play some big games yet.

Would be not unexpected if we pip them by a point.

I have felt depressed about the way we’ve been playing and the treatment of Ozil etc but today, particularly in the first half, we actually looked like an Arsenal team, moving the ball quickly, making lots of chances, missing some open goals. But it was worth traveling the 100 miles to be there.

For the next few weeks Emery is forced to start Auba in the EL and Laca in the prem. It’s perfect.

Should stick to the 4231, rotate Özil/Ramsey at CAM and rotate Xhaka/Guen/lucas in the pivot. Give Jenks a go at RB on wednesday and rotate Kola/Nacho at LB.

We had auba for the prem and laca for Europe last season, didn’t reach either of our targets then

Nothing is set in stone.

Depends on availability of assets and opponents we face.

There is no “should stick to”…

What does that mean? back 4 is more secure or Mustafi is better in back 4?

Regardless of system, we need better balance in midfield.

Granit has been excellent in both games, providing 2 assists to our Cbacks from corners against Bate and bossing midfield today/transitioning us quicker.

It was close to working so we don’t need to make out it was a disaster or that it’s a stupid idea. Sometimes “fate lends a hand” and even though Laca getting a 3 game ban is not ideal if it means he gets to start more games in the PL then that’s a good thing. I would always start with Laca who is generally able to press and defend better than Auba.

Absolutely right. In at Cback, we will need ALL of Mustafi, KOscielny and Sokratis rotating either through back 4 or (with Monreal also in the mix) in back 3. This particularly as with age, Koscielny is susceptable to knocks. In midfield, there is a reason Granit starts. He did well against Bate in both matches when you consider with Guendouzi-Torreira we struggled against bottom side Huddersfield. Again today with Torreira, Granit was the stand out player controlling our midfield. And with the engine room comes better opportunities in attack and better security in defense. Up top, Auba and Laca are… Read more »

Not disagreeing with all that but Auba
can play on the left in that system.
Less width and not as diligent defensively
but more of a goal threat.

The problem with Iwobi for me is inaccurate passes and not knowing when to hold on and when to pass.

Where is Rambling Pete? Through this whole period of shot football, he would have given us some good laughs.
Glad what seems like normal service has resumed for Emery and the team. Now for another 22 winning streak

Certainly different from Wenger’s tactics with regards to rotation. Wenger would rotate for cup competitions, but generally would stick with players whether playing well or not in the league matches, but Emery is a total wildcard, you never know what lineup he is going to play.