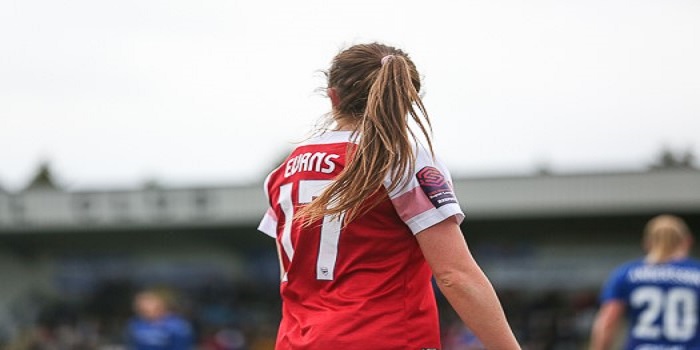 What Arsenal and Scotland winger Lisa Evans describes is fairly typical for the current generation of women’s footballers in their formative years. But with the growth of the women’s game and the increase in coverage of women’s football, Evans and many of her colleagues feel a responsibility to show the younger generation that a career as a professional sportswoman is a viable aspiration.

Lisa is one of UEFA’s official ambassadors for the #WePlayStrong campaign. “The aim is to promote women’s football as much as we can and to make people aware of women’s football, really,” Evans explains. “The ultimate goal is to make football the most played sport by females by 2020. So it’s a UEFA initiative to get more women and girls playing football, whether they want to be professional or not.”

The Scottish international will vlog regularly to promote the campaign, “The vlogs give an insight into my day to day life as a professional footballer. I want to give people a flavour of the life and what it takes to be at the top level of the women’s game. There is also some behind the scenes stuff about what I do off the pitch. We want to reach out to girls and show them that it’s possible to have a career in football and show them what it’s like to be a sportswoman.”

Her Gunners teammate Louise Quinn is involved in a similar initiative in Ireland, the 20×20 campaign. When I spoke to Louise about her ambassadorial roles in January, she used the phrase ‘becoming comfortable as a role-model,’ in reference to women’s footballers. Lisa says role-modelling comes naturally to a professional sports person, “You are always trying to present yourself in the best way that you can every day and maintaining a high level,” she reflects.

“So it’s a simple transition to reflect that back to young girls. It doesn’t take much adjustment, sportsmen and women have high standards, it’s just a case of showing that to young people.” Growing up, Evans did not have too many female footballers to draw inspiration from on her television screen. But she had a more immediate role-models at home. “I loved playing from a young age and my parents were really supportive.

“My older sister played too and that helped me a lot. She didn’t end up becoming professional, but she loved playing sports and so my mum and dad used to run our local football team as a result. It made it really easy for me to play and get involved. She kind of set that path for me. The women’s game has grown and grown, but I was always happy playing with the boys and being part of boy’s teams at school and at weekends. It all progressed from there and I never stopped playing, even when I got to high school. I was picked up by St. Johnstone and then I signed for Glasgow City when I was 16.”

Glasgow City were and are the dominant women’s team in Scotland. They were, however, thrashed 7-0 by German behemoths Turbine Potsdam in the Champions League in November 2011. But it was a match that would change Lisa’s life. Even in comprehensive defeat, her display on the wing drew attention from the opposition dugout. She was invited to a trial at Potsdam and the Perth born winger impressed sufficiently to be offered a contract.

“Moving away from my family when I was 18 or 19 was a huge thing for me, I was leaving my friends and family and I dropped out of my university degree to do it, so I had to make it work,” Lisa explains, her Scottish accent making that musical inflection, rolling the ‘r’ sound with such gusto that an extra half a syllable is created. “As a person I am quite sociable and I knew, for myself, I had to try and socialise with my teammates.

“Learning German was hugely important to me so I could understand what was said in training, but also so I could involve myself socially with the other girls. I wanted to make the effort to integrate so I started taking lessons straight away. After about a year I could understand everything and probably after 18 months to 2 years I could speak it fluently.”

Evans spent three years at Potsdam, before moving to Bayern Munich in 2015, where she won the Frauen Bundesliga in her first season playing alongside current Gunners teammate Vivianne Miedema. In 2017, she signed for Arsenal and has since convinced other players to join the club from Germany, with Lia Wälti and Tabea Kemme, signed from Potsdam, and Viki Schnaderback, signed from Bayern, all citing her influence upon joining.

What do our three most recent signings have in common? ?

With Scottish international teammates Emma Mitchell and Kim Little in the squad, Evans has plenty to remind her of home. But a small German speaking contingent in at London Colney has enabled her to keep her language skills honed. “I still speak a bit of German since I came to England, we’ve got lots of German speaking players at Arsenal and that’s given me the chance to keep it up.”

But the 26-year old is insistent that relationships in the squad are not divided along national lines. “The Scottish girls here are some of my best friends in the world and I’m really close to all of them. But we’re all very tight knit here, we don’t have cliques. The German speaking girls are really integrated and all of them speak great English.”

Evans’ raids down both flanks have been a key creative feature for Arsenal this season and the Scot signed a new contract with the club in December. Hopefully Evans’ stay with the Gunners will last long enough for her to add another string to her linguistic bow and for her accent to develop a cockney twang….

With thanks to Kunjan Malde for the header image.

Delighted to have committed my long term future to @ArsenalWFC ?❤️ pic.twitter.com/3N9o9HlB7t