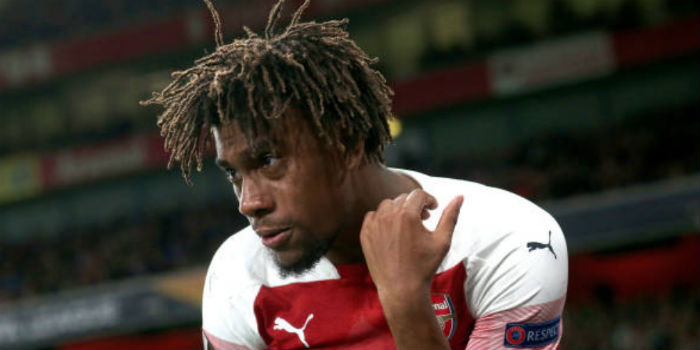 Alex Iwobi says that working this season with his own analyst has helped him improve his game, but he admits he needs to add more goals and assists.

The Nigerian international was caught out badly in the Man City game last weekend, losing possession on the edge of our box which allowed Sergio Aguero to open the scoring inside the first minute.

However, he has performed well at times this season in a team which hasn’t always allowed individuals to shine, and at 22 he still has plenty of time to improve on aspects of his game.

In particular he highlights the need to score more often, and to provide the final ball to his teammates.

“I would say each day I’m still growing and still learning, but negatives, obviously they’re always going to criticise me for my goals and assists, which I need to add to my game if I want to be compared with the people I’m playing with,” he told the official website.

“This season I feel much better and I feel like I’m in control, especially going forward in an attacking sense.

“I have an analyst now who is always trying to help me, which I didn’t have in seasons before, so he’s sending me clips and saying what I can do better.

“That’s helped me and I’d like to say I’ve been involved in a few goals this season, even it’s not the assist or the goal.

“I’ve been getting a few pre-assists which go unnoticed. But at the end of the day as long as the team does well, that’s my main concern.”

The Arsenal academy graduate is someone who divides opinion, but as a home grown player is valuable to the squad, and there’s no doubt that he has taken some steps forward this season.

Only Alexandre Lacazette (8) has more assists than Iwobi (7 – along with Aaron Ramsey), so he’s not unproductive, but if he can find a bit more in the final third that would obviously be very welcome.

He is only 22. He should improve physically and mentally over the next few years and, given he isn’t doing that badly if second for us on assists, will be a big player for Arsenal if he does.

Look forward to that happening.

No kidding!
Seriously though it’s bright he has a personal analyst. Kid’s serious about improving himself.
Irks to hear people especially here on this blog talk about how he’ll never be more than a good player….. because it’s set in stone huh

Would be a good sub next season when and if we buy quality wingers. Nothing else.

A few more goals please! You have that in the locker son. Love that guy’s attitude, hope he becomes a legend!!

Does he though? Compusure and decision making are his greatest flaws in the final third. I don’t know if that kind of “killer instinct” he needs to push on to a new level can just develop out of nowhere after this long.

Yeah but I mean, look at Raheem Sterling. He’s only just found that decisiveness in the final 3rd, and he’s still developing. I think this comes with more time & experience on the pitch.

I don’t think Iwobi compares favourably to Raheem Sterling at any point in time, different calibre of player altogether.

Erm no, a quick look on Wikipedia will tell you that’s bollocks.

He’s already on 12 this season.

True but Sterling is only 18 months older than Iwobi. Iwobi is nowhere near where Sterling was 18 months ago imo.

Lol is that all…you need a brain too

Sorry that was rude…not good enough please move on

I’ve never previously been convinced of Iwobi, but i’ve got a rule that I don’t criticise any of our players who are under the age of 24. Iwobi this season has begun to turn my opinion, he’s playing with much more purpose and aggression, and whilst he definitely needs to kick on further, there has been clear improvement within his game. The next 16 months of his development will determine whether we stick or twist, I’m certainly willing him to do it, and I think the odds of him succeeding at Arsenal have also reasonably increased, but the next step… Read more »

He needs to learn not to try and dribble past an attacking opponent in our own box and 30 seconds into a game vs the best team in England. I’d have thought someone might have told him that when he was 10 let alone 22! He is thick. Super thick.

You call that a dribble? he just shook his legs and watched the opp take the ball.

Also i don’t approve of calling him thick.

It was hopeless and just about sums him up IMO.

For the record, I don’t care what you do or don’t approve of.

Did you go / not go to the same school as him? That made about as much sense as his attempt to dribble the ball out vs Man City.

Lol. I’d start with the Mr Men books if I were you.

Leno me, I’ll be your friend
Reply to  Patrik Ljungberg

Shhh, Patrick! Sit back and just record what happens, take note of Attenborough’s best work and avoid interfering (unless they get stuck in a pool and need someone to build them steps…). If we intervene, we run the risk of disturbing their natural order. When one of them puffs out their chest and warbles the other will back off, just be patient…

Do one you mug

Leno me, I’ll be your friend
Reply to  James Sudbury

@Mr Sudbury
Dude, take a joke. Calling people mugs when it’s abundantly clear you’re thumbing up your own immature responses is, well, a tad muggish ? Think you might be on the wrong webpage, pal.

Watch that again! Iwobi was feeling cold and looked like he was not ready to play! I doubt whether he will be a hit with Arsenal

I love how everyone is disliking these comments for stating facts. Lol.

You’re right guys. Iwobi did well at the edge of our box.

Iwobi needs to take less touches, pass more, release it quicker and stop losing possession cheaply. He needs to do all these things before he thinks about scoring goals. Against City he confirmed he’s not good enough to play in a title challenging team. Arsenal need to get shot of these players to het back to where we belong.

I think he just needs to be calm in front of goal and he should be alright. Most games he gets into good positions but scuffs his lines. Instead of passing, he shoots whereas instead of shooting, he passes. But huge progress compared to last year. The pass to Lacazette for the Liverpool goal at home was world class, the assist to AMN’s goal at Anfield, and the pass to Kolasinac when he came on vs Cardiff that won us the penalty were amazing. I hope he really finds consistency in end product apart from the consistent nutmegs!

He’s a young player and has a lot of room to grow – but a lot of people are unduly harsh on him given his age. His end product is improving and he’s not afraid to carry the ball or play out of relatively tight spaces. I realize his defensive work needs to improve (although the back 4 left a lot to be desired on the goal after he lost the ball to City) – I appreciated seeing him put in a tackle or two and the effort to track back against City to cover for Lichtensteiner. He’s got potential… Read more »

Really?
I didnt realize that

I love Iwobi for the fact that he’s Arsenal through and through but it’s been 3 or 4 years since he broke into the first team and yet he doesn’t look much better from when he played his first match for us! His decent technical ability is what you’d expect from any young professional footballer so once you take that out of his game, you’re not left with a lot. His finishing is woeful and he is usually blowing by the 70th minute. I really do hope that Iwobi can continue to improve and become a great for us but… Read more »

We’ve been singing off the same hymn sheet with him since he’s been involved with the first team. A few moments of brilliance pockmark decidedly average seasons. I simply don’t think there’s a player in there with the output to sustain a top 4 team, let alone a title challenge.

Well my stance is, no matter how much time, we’re not going to get what we want from him.

But I think the most critical thing is that we don’t have the luxury of time. We need people who can produce the goods to get us genuinely competetive with the top 4 sides again. I know you can argue defence is our issue not offence, but I think our wide forwards are found wanting when you compare them with any of the clubs we’re trying to compete with.

Not good enough and never will be, haven’t seen a massive improvement, and I for one believe he should be sold, doesn’t track back, gets knocked of the ball far too easily, doesn’t have a strong shot on him, I can’t see him reaching the level that’s needed at Arsenal. O ne trick pony

Iwobi is an average player who has plateaued. I don’t see him becoming any better hereon. He has become too bulky for his own good and is neither a finisher, nor a dribbler, nor a playmaker, nor a speedster nor a winger. He may show occasional flashes of talent but he is not someone who is going to take us to the next level.

Best is we encash him and add to our transfer kitty.

Seriously, who has he got these 7 assists against?

These assists stats are a load of crap anyway, as they represent the final pass not an act of creativity.

Last year 1 of his “assists” was a 5 yard backward of square pass to Xhaka who smash in from 30 yards against Liverpool, aided and abetted by Mignolet’s shit goalkeeping, how is that an assist? It wasn’t creative nor positive.

That’s what needed from Iwobi… Goals.

He has made some very important key passes that have won us the games.

Assists chart looks decent… But in terms of goals very poor, and that is the reason for criticism.

I’ve got a personal analyst, he says I’m a bit of a cunt.

Against city,against city dats wat people HV been shouting like dats d only match he has played D’s season,cnt count how many matches he has been the one driving the team forward ds season,and mind u emery played him on the right where hez not really dat good and wasn’t going to b against city…I believe he will shock people he has done it before(was almost released countless times in the youth setup but became bigger Dan akpom and amn)and he will do it again #Big17

He’s had a few very good games this season where he hasn’t got reward for his performance. Hopefully the end product is not too far away