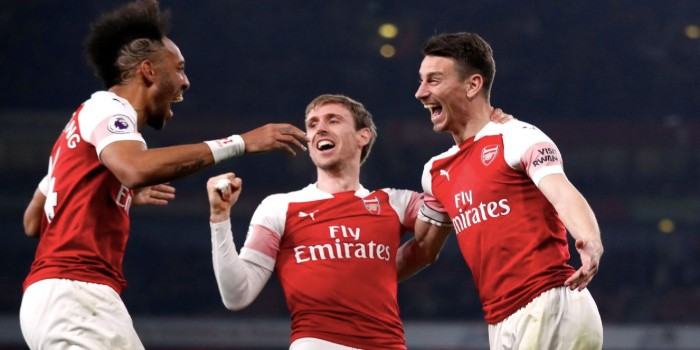 Carl Jenkinson says Arsenal are looking like a really strong side after their 5-1 demolition of Bournemouth closed the gap on 3rd place Sp*rs to four points ahead of the North London derby.

Ahead of Saturday’s trip to Wembley, Jenkinson, who put in a solid shift in his first league start of the season, highlighted the confidence with which his teammates are playing.

“It was great,” he told Arsenal.com after the victory. “It was always going to be a difficult game because they’re a good team and they try to play like us.

“Fair play to us, they came here and they tried to play. It felt great to be back out there and great to win too, so all in all it’s fantastic.

He added: “I think it’s a very easy thing to say but we’re looking at one game at a time. That’s the way we’ve got to look at things and it’s the way the manager looks at things. We just keep building.

“In the last few games in particular, we’ve played some really good stuff. We’re looking like a very strong side, which we are. We’ve got a lot of really talented players and we want to show that we can do well at the minute.

“Of course, we’ve got a tough game coming up but we’re going into it with a lot of momentum and a lot of confidence.”

Having been a member of past squads who’ve successfully qualified for the Champions League, Jenkinson knows all too well how important this stage of the season will be for their European aspirations.

“It’s hugely important,” he reflected. “Towards the end of the season is a very critical time because the competitions are coming to an end and it’s about being consistent to get the results.

“I think we’re doing that really well at the minute but we’ve got some big games coming up. It’s a very important time for us but as players, we all know that. Our focus is on doing a good job and doing what we need to do.”

Glad to see him get some hame time. Hopefully he can jump start his career again.

What does “hame” mean, and why does your phone think it’s a word? ?

Perhaps he often writes in Scots.

Should have used autocorrect, but it’s all the hame to me.

Somewhere else of course.

One of the best games I’ve seen Jenko play for Arsenal. Huge credit performing like that without much regular game time. He should definitely be in with a shout to make that spot his own for the rest of the season.

Who downvoted this? Shame on you.

Well done Jenko. Good game tonight. Good to see both him and Lichtsteiner perform well in Hector’s absence. Sterner tests ahead but I’m enjoying the positives of the last few games. We’ve done what we needed to do which was to build a bit of momentum and confidence going in to the tougher games coming up.

If he keeps up some decent form I wouldn’t mind keeping him on as 2nd choice RB. I’m too lazy to check but how many other teams have excellent 2nd backup RBs? Would allow us to concentrate on areas of greater priority

Won’t happen. He doesn’t play enough to outweigh any transfer fee we might be able to get for him*, especially if he closes the season strong.

*I have done zero research, so this comment assumes his current contract doesn’t expire at the end of the season.

I think his contracts up.

To replace wouldn’t be the problem I think it’s how long bellerin will be out for next season. We definitely need rb but the question is do we spend the limited funds on a quality rb or go for inexpensive young or old until bellerin comes back and hope he’s as good as before?

Masterclass from the Corporal tonight.. That other guy wearing the 10 shirt wasn’t too shabby either

Sue
Reply to  I AM ARSENAL

Auba looks terrifying in that picture tbh. Until Dawn terrifying. :/

You can’t fault him for putting in a shift. Grew into the game later stages of the first half with a good give and go and at one point harried the ball to great effect when Guendouzi and Torreira were both down. BUT suspect in positioning all nigh leading to several great opportunities for them and passing percentage was poor. Overall, we have two options if AMN is not fully fit for weekend (which I expect he will be) Either Lichsteiner who has better positioning and is a better player but lacks the legs now, or the much more limited… Read more »

yep jenkinson is at best a fourth choice option, could he get into any of the top 6 teams around us? i doubt he would be allowed into the grounds.#
time to pass him over to huddersfield or ipswich next season

A bit of levity needs to bear?

I really don’t understand why Jenkinson went so badly out of favour. He had a couple of dodgy games when he was younger but I’ve never seen him as a complete liability. He didn’t get that England cap for no reason. Sure, he’s no Bellerin but I would be ok with him being the second choice right back He’s got a lot of the same attributes, good pace, fine delivery into the box, works his arse off. It seems like he’s made a bit of an impression on Emery and is the type of player who probably just needs that… Read more »

And the best thing about him is, l don’t think he’d mind not being first choice and staying at the clun he loves.

Would that be his hame clun?

Hahaha, Of all the fing times for autocorrect.
Made a lame joke even worse.

I think we should stick with Jenko for the rest of the season hes much better than AMN and Lichtensteiner (lazy, poor passer and rubbish final ball, legs have gone and not up to the pace); Jenko gives 100% everytime, has pace to get back into position and his final ball is much better; If anyone could learn something from Lichtensteiner and become a better player its Jenko.

Did you see him bringing the technique attacking the box in the first half?!

How many players out there have the dedication and determination to be completely out of the squad for so long (first league start since 2016!!!), get named on the bench due to threadbare injury situation, get called into action in that match, and do enough to get the manager’s trust for the next league start where 3 points is mandatory?

And then go on to not look out of place!

Kudos, Corporal.
Kudos to you.

He hasn’t done himself harm for a chance in market this summer.

But gave away the ball too much, twice Koscielny had to make last ditch tackles. One in first half the other in second.

Jenkinson needs to be sold.

I thought Jenkinson was superb against Bournemouth.