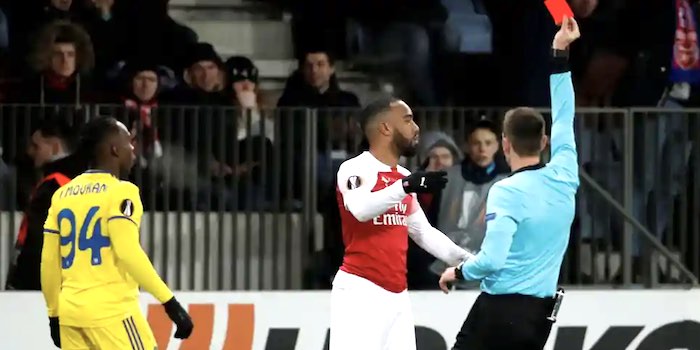 Alex Lacazette will miss both legs of Arsenal’s round of 16 clash with Ligue 1 side Rennes after UEFA handed him a three-game ban for last week’s red card against BATE Borisov.

The Frenchman was given his marching orders in the final five minutes of the 1-0 defeat in Belarus for a raised elbow.

Having sat out last night’s 3-0 win in the return game, we’d assumed that was the end of the matter, however, the authorities have deemed his offence to be worthy of more serious punishment.

It’s a pain in the hole…but not the end of the world. Well assuming, Pierre-Emerick Aubameyang stays fit.

Weird how we’ve entered this stage of the tournament with just one senior striker for the second season in a row.

What the F*CK?!
Did I miss something or was he not fouled right before he snapped? The red card in general was bit ridiculous, but never mind a 3 game ban.

He lashed out, it’s a red card offence. But there should also have been a yellow for the foul

There was a yellow, Filipovic was booked

Can we appeal or is it an automatic 3 games because of violent contact? Wasn’t much of a hit to be fair, he should have clocked him to make it worth it, haha.

If we can’t beat the 11th best team in France without Laca then we have some real problems.

Even if we could appeal, they’d only tack on another one for wasting their time.

Can’t really have any complaints about this, even though that Bate guy was being an arse.

Ha, it was absolutely worthy of a 3 game ban. He’s my fave player but I’m sure even the man himself won’t have too many arguments. At least he semi-hit him rather than just a shit brush to the chin like usual.

UEFA Agenda:
Step 1: Draw a horrible opponent for Arsenal – failed
Step 2: Schedule it horribly- somewhat failed
Step 3: Look into any wrongdoings by the club and amplify the punishment – Check

Fair enough, Laca should have known elbowing people isn’t allowed unless you play for United…

Many a true word is spoken in jest ?

How does that Lacazette reaction warrant a three match ban is beyond me…the UEFA is a school teacher who flicks children’s ears for having ears.

Any red card for violent conduct is a minimum 3 match ban. This isn’t special to Lafayette.

The unighted thing is interesting…… now under the smiling prick, they’ve reverted to Ferguson tactics of “ take them down if necessary”…. just doesn’t work against better European teams thankfully

They are still playing mourinhball. People don’t like him yes, but it’s pretty much his legacy at play, and it made it easy to build upon, as is always the case of inheriting defensive minded teams. Organizing the defense and finding the balance is the hardest part. MourinhoBall of score a goal and defend the lead, fast transition and counter-attack. The new coach only added a bit of attacking freedom. And of course, now the players actually want to play. A curious point to be made about their mentality.

This isn’t ideal, but I still like to think we will Rennes on their parade

Rennes seems a good draw. That said we are our own worst enemies.

Then again let’s not metion these games again ever…

Get beaten and we are crap.

Beat them and they are crap.

Beat good opponents (with Mustafi) and they are having an off day.

Arsenal fans are entitled self righteous lot. Can never please them. Even when we win it’s like a loss.

Do you read and understand what you write before posting?

“Arsenal fans are entitled self righteous lot. Can never please them. Even when we win it’s like a loss.”

We have played solo with Auba up top to good effect. He may be still too wasteful and poor at protecting the ball for us but he hasn’t racked up his tally from nothing either.

Bate were no match for Arsenal.The gunners laid seize to the Bate goal
but shooting past a massed crowd has always been a problem.
I fear that against the other teams ,the gunners will be ripe for the
speedy counter attack.In contrast the gunners is tsill too slow .
Watch how Watford hit 5 against Cardiff whom Arsenal had a hard time.