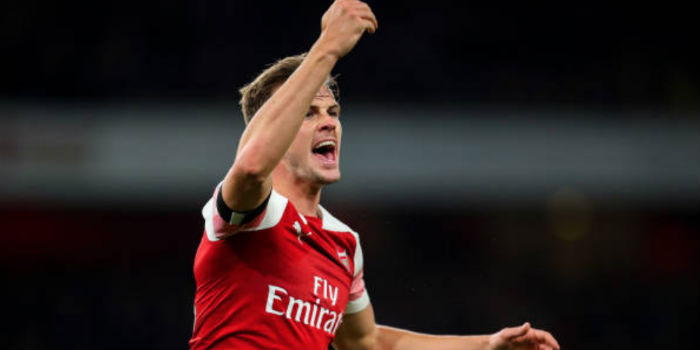 According to the Mirror, Rob Holding is set to be offered a new deal by Arsenal

The centre-back penned a contract extension, tying him to the club until 2023, as recently as last May but is set to be rewarded with a pay bump by Unai Emery after impressing in the first third of the season.

The show of faith will no doubt be welcomed by the 23-year-old who is currently sidelined by an ACL injury sustained in the 2-2 draw with Manchester United in December.

Holding has made 60 appearances for Arsenal since signing from Bolton as an unknown quantity in 2016. He went on to make a name for himself at the end of his first season with a stellar performance in the 2017 FA Cup final win over Chelsea.

While the defender found it difficult to get game time during Arsene Wenger’s final year, he worked his way back into the fold this campaign and was fundamental to this season’s 22-game unbeaten run.

With doubts over the long-term future of Shkodran Mustafi and Laurent Koscielny turning 34 in September, he’s definitely well placed to be a key player in years to come. Here’s hoping he comes back strong.

Too right. You know, we are all jizzing over the posthumous work that Sven did for Arsenal but whoever spotted this lad and got him signed up for £2M deserves a new bumper contract too.

That would be Arsene but ah well.

I like Holding, but this is so very Arsenal.

Let’s give a player who has more than 3 years on his deal another contract, ignoring the fact he has a serious injury that can sometime impact a player long after it’s healed. We could do this in 12 months time with much less risk attached, but no, let’s do it now.

It’s admirable and reckless at the same time.

Was thinking the same. Love Holding, but why raise the wages of a player who won’t play for us until next season? It increases our wage bill (not by much, I’m sure) for no good reason.

It’s not exactly admirable. They’ve done this with quite a lot of injured players over the years, and I’m starting to think that it’s because injured players are negotiating at a bit of a disadvantage – pyschologically, at the very least.

Holding is a young English player and cost us 2 million or something from Bolton. If he struggles to get back to his former level next season he won’t be hard to sell. That said, I hope he does and don’t see why he shouldn’t.

you’re right. He should be assessed after the injury as well. A contract is not a reward just for fine past performances, but a way to maintain said performance in the forthcoming years.

That or they think he’s on a very low wage unsuitable to his level of an established player, so they’ll raise him.

Knee injuries like Holding’s are long term, but in the end are not usually that significant. With the quality medical care pro athletes get, he should be pretty much fully recovered by the start of next year. So while I think it’s odd he’s getting a new contract already, it’s not really that risky.

I hope he stays for a long time but already on a long term contract, surely there are more pressing negotiations to be made

How long does Koscielny’s contract go? 2020?
Are there any news about his intention to leave at the end of the season? I feel he’s finally (almost) back to his best even if he is not as fast as 7 years ago. I would keep him to be honest if he wants to and obviously not play him in every game.
Sokratis, Holding, Kosc, maybe chambers and 1 or 2 new guys…

I wouldn’t. No room for sentimentality. Our defence needs an overhaul both in terms of personnel and tactics. Koscielny is a remnant of the defence that has been largely woeful in the last few years. Only Holding and Bellerin should be considered for our future backline. Papa does a good job and Monreal is solid but are both 30+. The less said about Mustafi the better. As for Kola, great going forward not so great at the back. I yearn for the days of a solid defence. It’s not the job of the back four alone but the team.

Apart from the two games right after his return from his long-term injury, I believe he was great recently. Don’t think he is/was suspect defensively. I’m not being sentimental, just think he is a very good option to have.
Considering we’ll also need a new right back and left back, I believe it would be wise to keep him if he wants to stay.

As a left back I fancy Aaron Martin from Mainz who plays like a young Monreal. Very good throughout the whole season and would probably be cheap. Spanish as well.

I would include Mavro as much as I would include Medley as our future. Mavro holding is own in a game or two doesn’t necessarily mean that he can perform at a high level over the course of a season. Not only have we seen Holding perform well we’ve also seen him have bad games but all in all we’ve seen enough to know he has the tools to make it at Arsenal. Better to err on the side of caution with Mavro. After all we didn’t lose when Mustafi played in his first 15 or so games for us…

Forgot ti mention him. My bad. The comments from Sokratis about him are really exciting. Hope he makes it.

Great young English centreback with a great name for the position. Excellent that we’ve got him tied down!

Kroenke seems to love all things Holding.This one will some day make him some pretty penny as well.Lucky chap that one.You usually become the blood sacrifice after defeats if you sign improved contracts in this club.Earning high figures make gallons of piss boil all over and the raging begins.

We should put a clause in his contract which requires him to change his last name to Not-Holding!

Has come on leaps and bounds this season. The club must be optimistic over the prospects of his injury too. Been such a miss.

It’s been a tough season and we would do well to get into the champions league. However, we have some good young players and with clever buys in the summer transfer window there is a good chance of improving next year especially in defence.

Excellent news, if true. Rob is one of very few defenders we have seen in recent years with the true instincts of a defender. We need to develop the defence around him.

Always rated Holding, glad he’s finally getting a chance to shine, Chambers is also a good CB, better than mustafi but not good in playing in a back 3, that’s where Wenger had him and made him look bad because he didn’t have the speed to play there but overall I also rate him, with Holding, chambers, Mav, we might just need one more decent back and focus our attention more on our Full backs and wingers this coming summer!