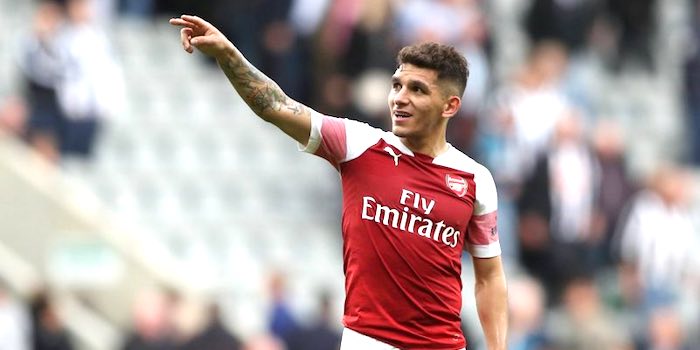 Lucas Torreira says that the Arsenal squad are focused on a top four finish and a return to the Champions League next season.

The Gunners currently sit in sixth place, but just three points off Chelsea in fourth, and – on paper at least – with three winnable Premier League fixtures in the coming weeks, the Uruguayan wants his teammates to turn up the pressure on the other contenders.

Speaking to Sky Sports, he said, “Qualifying is something which is very much on our minds.

“The squad is focused on qualifying for the Champions League because a big club like Arsenal deserves to be in that competition.

“If you look at the table at the moment there’s several points’ difference between us, but that said we’ve changed coach this season and there’s been a lot of new players arriving and we know it can be difficult to adapt when that sort of thing happens.

We’re all working towards becoming the top team we want to become and I think we are doing that because we’ve been competing with some of the best teams.

“It’s about fighting with everything we’ve got to achieve our objective because that would be massive.”

The importance of the Champions League goes beyond prestige, with the club’s managing director Vinai Venkatesham admitting it costs tens of millions of pounds each season in prize money, commercial income and associated revenue streams.

It’s a tough job, especially as we’re fighting against Chelsea and Manchester United, and our form has been a bit patchy of late, but hopefully a good run in the final third of the season – something we’ve seen in the past – can get us back to where we want to be.

Episode 513 – Behind the January transfer window with David Ornstein

Agreed! Can we also have a song that doesn’t cut 5 inches from his height? He’s not got many as it is…

Before Uniteds resurgence I thought we had a decent chance, but we’re now relying on at least two teams cocking it up more than we do so very little confidence just now

If we step it up in the upcoming 3 games, we might not need to rely on them. Both are yet to play City and Liverpool and generally more top 6 games than us. Yes e’re not the favorites but we have a chance.
Next 3 games, do or die.

Ya gooner
Reply to  goongot

Merlin’s Panini
Reply to  Ya gooner

Well they just spelled that out in the article…

With us having to play only 2 of the top 6 (spuds away, United at home) remaining in the league as opposed to United, Spuds, and Chelsea having to play at least 4 of the top 6 along with CL, excluding Chelsea, on paper our remaining fixtures are favorable. On paper is not where the games are played, but if we can get on a run these next 3 games and build some momentum, we certainly have a strong chance of breaking into the top 4. At the beginning of the season I told myself Emery has a year, it’s… Read more »

A bit of a run leading into the home fixture with Manure, and that could be the defining game of the season regards top 4.

I think it will be an epic end to the season.

I can see us making it to the Europa League final under Emery and also being in Top 4 contention leading up to round 38.

I forgot…If we win the Europa, do we replace whoever comes 4th in the league table in the champions league? or 5 English clubs?

Let’s be honest: we’ve got no chance of finishing top four. Spuds, Pool and City will finish top three and we’re fighting with the Chavs and United for fourth. We won’t finish above both the Blues and the Red Devils. We are far to fragile defensively and will concede well in excess of 50 league goals. That gives us zero possibility of winning CL football via the PL. And there are too many good sides in the EL: I can’t even see us making it to the final. It’s time for a few people to wake up and smell the… Read more »

Fuck me, after years of your Wenger out bullshit you only give the new manager 8 months.

You are not a supporter of the club, you’re probably not even happy when they win trophies.

I did say “possibly”. The jury’s still out on Emery.

And I am very happy when we win – that’s why I hate seeing mediocre Arsenal teams. Watch how many people are bitching at the end of the season when we flop.

I do believe you’re a true supporter,
just a pessimistic one.
No need to overrate Manure or Chavs.
Manure defence is also dodgy, they
have a difficult run of games coming
up and the not Maureen bounce will
end. Chavs have a misfiring
attack and even their own manager
doubts their motivation.
That does not equal “no chance of
finishing top four”

You could make a strong case on everything you said until “possibly a new manager”. If you had even an ounce of understanding on how difficult it is to be a manager, to come to a new country/team, to work with sub-par players to compete with world class teams with outrageous investments, with ambitious fans that are demanding above average performances with those sub-par players, and finally to have a board that says “yes we have alot of problems, but we don’t have money to give so please make do and get us UCL football”, now imagine how extremely difficult… Read more »

@ArsenalTillIDie some of emery’s decisions have made me want him out…i wont lie. it’s like wenger all over again. what he sees in some players like iwobi, lichsteiner and others is beyond me.

The sub-par players were good enough to get a 22 unbeaten run. Until the coach decided to impose a stupid tactic with 7 defending players and asking the 3 remaining attacking players to defend. And despite this, we take goals and goals and goals and goals…. and a boring team without any inspiration. Don’t worry, he did the same in Paris.

Fair points. But riddle me this Batman: how come teams like Watford Newcastle and Palace all have better defensive records than us? It can’t be money, can it?

After the many years of stagnation it’s surly gonna take our new manager/coach one hell of a lucky run to sneak into the top 4…but then he did get that lucky 20 odd unbeaten run so maybe it can happen, but only if we dont get any more injuries, which really have killed our season.

Lack of Perspective
Reply to  Josheha

I think we rode our luck at times. But 22 games isnt luck. Its more than half a season.

He’s back to his best in a more confined role in front of the defense. Against BHA, Soton, United and Liverpool he was abject conspiring to lose the ball or be robbed of it 5 times, 3 of which led directly to goals! Yet not a pip from the same voices who like to imagine ills on Granit. We need a bit of continuity to our selection. Emery has of course been hampered by injuries and has had to shuffle the backline which hasn’t helped. When Mustafi- Sokratis-Holding had stable selection, they were still suspect but we held firm for… Read more »