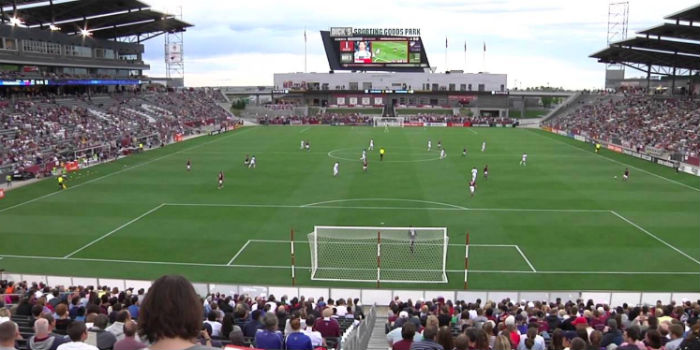 Arsenal have confirmed a fourth fixture in the USA this summer.

The Gunners will kick-off their jaunt across the Pond with a fixture against Colorado Rapids, also owned by Stan Kroenke, at Dick’s Sporting Goods Park on 15 July.

The club have confirmed that the first team will fly to the United States on 11 July and will be based in Los Angeles before travelling to Denver for the opening match.

Managing director, Vinai Venkatesham had this to say about the upcoming match: “The match against Colorado Rapids in Denver is a great way to kick-off our summer tour to the United States.

“We of course have very close links to the Rapids through our mutual ownership and we are looking forward to playing each other in a match which will provide both teams with a competitive challenge, in front of many American Arsenal supporters.”

Yesterday, the Gunners confirmed their involvement in the International Champions Cup – a pre-season tournament with no real discernible format.

No doubt we’ll announce a couple of pre-season games closer to home at some point.

Another day, another friendly in the US announced. Stan will certainly getting his money’s worth of publicity for the Kroenke “stable” of sporting brands. Anyway, more cash for the coffers and, hopefully, no injuries or unnecessary fatigue for the squad.

Not more cash for our coffers though – more likely to fund the LA rams.

I’m going to Denver and Charlotte, and will pay overpriced tickets to watch Tyrece John Jules and Bukayo Saka to take pot shots against Matt Macey in training.

I’ll also be making my wife sit through this ordeal, because I once watched Thierry Henry and Patrick Vieira and became a fan of the club almost 20 years ago.

I drove halfway across the country to watch Arsenal play the Red Bulls and flew the whole family to the west coast to see them play a Mexican League team. You do what you gotta do.

I am just waiting for the announcement of matches scheduled in between against the Rams, a quick fighting lesson vs the Avalanche and some shooting practice vs Nuggets.

… and the Avs would still manage to lose.

Only about five years overdue, but hey, we’ll take it. One nice thing about DSGP is free parking… but those $9 beers, ugh.

When will there be a match in south africa. Its been more than 25 years 🙁

I shed a tear everytime they announce pre-season tours and South Africa is not the destination.

A decent store all the same. I even found one with cricket gear in it during my time in the States. It brought a tear.

Bet Stan doesn’t even go to this match?