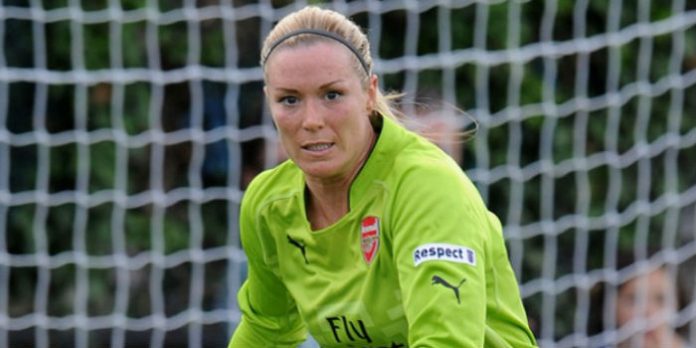 Former Arsenal goalkeeper Emma Byrne is to be inducted into the FAI Hall of Fame in Dublin this weekend- the first female player to be awarded the honour. Byrne played for the Gunners for 16 years, winning 12 league titles, 10 FA Cups, 8 League Cups and a Champions League during her time in North London.

Byrne also enjoyed a distinguished international career, making her senior debut in 1996 before going on to win 134 caps for the Republic of Ireland- a record for an Ireland international. Byrne captained the side between 2013 and 2017, following the retirement of her Gunners teammate and good friend Ciara Grant. In 2017, Byrne led a player protest against the FAI in order to secure better working conditions.

Thank you all for your lovely messages & comments! I’m extremely honoured ??

Emma left the club in 2016 to play for Brighton & Hove Albion for a season in 2017, before retiring. She currently lives in Barcelona and runs goalkeeper coaching clinics. Byrne will be officially inducted into the Hall of Fame at the ‘3’ FAI International Awards ceremony this Sunday.

FAI CEO John Delaney said: “To pull on the Ireland jersey is a special thing, but to do it on 134 occasions is quite remarkable. Emma has earned her right to be described as an Irish legend. Emma was a fantastic goalkeeper and ambassador for the women’s game. She deserves to have her name in the Hall of Fame, alongside some of the best players ever to represent Ireland.”

Byrne joins fellow ex-Gunners Dr. Kevin O’Flanagan, Liam Brady, Don Givens and Frank Stapleton (booooo!) in the FAI Hall of Fame. We spoke to Emma at Arseblog News in July 2015 and May 2013. Many congratulations Emma.

The Republic of Ireland team is so woeful that they’re going to induct a woman and an Englishman into their hall of fame this year!

Why are you talking about a West ham player on this page? Who gives a fuck which shite national team he plays for.
Congrats Emma, you are a legend in women’s football.

Congratulations… And yes, thoroughly deserved, and then some!